Human rights lawyer: Magna Carta's inspiration has been subverted by powers that be 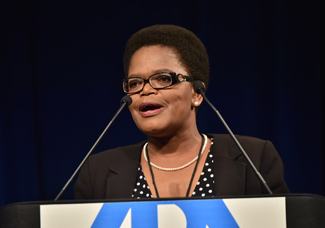 Beatrice Mtetwa is a human rights lawyer in Zimbabwe. Photo by Simon Apps.

The inspirational, and aspirational, template of the Magna Carta for the constitutions and legal documents that succeeded it is one of the recurring themes at the ABA London Sessions commemorating the 800th anniversary of the sealing of the historic charter.

However, words and phrases are only as good as the intentions of government institutions tasked with upholding and enforcing them. That realization was hammered home during a Saturday morning plenary session featuring Zimbabwean human rights lawyer Beatrice Mtetwa.

During the one-hour session, Mtetwa (who was featured in the February issue of the ABA Journal) credited the Magna Carta for inspiring the various independence movements in Africa during the 1950s and ’60s. However, she said, in many instances African nations merely deposed one king for another one, albeit one who wasn’t addressed as “Your Highness.”

“We got those constitutions and bills of rights, but we also got African leaders who disrespected those rights,” said Mtetwa. “What went wrong? Power. We have not moved away from power exercised by kings. We just call them presidents now.”

Mtetwa detailed her human rights work in Zimbabwe and the obstacles that have prevented the country from fully realizing the ideals enshrined in the Magna Carta. One of her anecdotes involved a client that was kidnapped by the authorities, thrown into a car and taken to the airport against his will so that he could be deported. Mtetwa secured a court order delaying deportation, but the man who had grabbed her client simply ignored the order. “That man is now the head of the Zimbabwe human rights commission,” she said to a mixture of laughter and horrified gasps.

Even when things looked promising in Zimbabwe, like in 2008 when longtime president Robert Mugabe formed a new, inclusive government with the opposition party, Mtetwa argued that, once again, it was important to look past the flowery rhetoric. 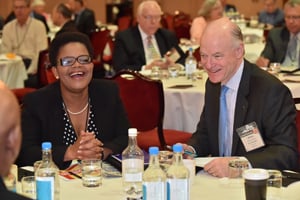 “We drafted a new constitution in Zimbabwe, and it looked good on paper,” she said. “But as the English say, ‘the proof of the pudding is in the eating.’” Mtetwa expressed disappointment with the government’s response to the new constitution, saying judges don’t seem to understand the document while noting a process to determine whether existing laws fit with the new constitution hasn’t even begun.

Mtetwa ultimately said she wasn’t very optimistic that Zimbabweans would be able to exercise the rights granted to them under their new constitution. However, she suggested to the lawyers in attendance that they can do a better job staying informed of events in Zimbabwe.

“Most people probably don’t know that we just had by-elections on the tenth of this month, and people got broken limbs simply for exercising their right to vote,” she said.

Mtetwa also said that she believed very strongly in using litigation, if not to get the right result, then to create a historical record: “I feel very strongly that it’s important to litigate cases so that no one in the future can say: ‘We didn’t know this was happening.’”