Lawrence Lessig, a professor at Harvard Law School, has filed a lawsuit that says the New York Times defamed him with a sensationalized clickbait headline that read: “A Harvard Professor Doubles Down: If You Take Epstein’s Money, Do It in Secret.”

The defamation continued, Lessig argues, with a lead that read: “It is hard to defend soliciting donations from the convicted sex offender Jeffrey Epstein. But Lawrence Lessig, a Harvard Law professor, has been trying.”

Lessig’s Jan. 13 lawsuit says the New York Times’ headline and lead mischaracterized Lessig’s Medium essay in which he criticized the scapegoating of Joichi Ito, who accepted an anonymous donation from Epstein as director of the Massachusetts Institute of Technology’s Media Lab. Lessig wrote about the lawsuit in another Medium essay.

The New York Times’ actions “are part of a growing journalistic culture of clickbaiting; the use of a shocking headline and/or lead to entice readers to click on a particular article, irrespective of the truth of the headline,” the lawsuit says. “Defendants are fully aware that many, if not most, readers never read past the clickbait, and that their takeaway concerning the target of the headline is limited to what they read in the headline.”

Lessig says the New York Times published the lead and headline, although Lessig told the newspaper before publication that they were contrary to what he had written. When he contacted the newspaper after publication, no changes were made, Lessig says. 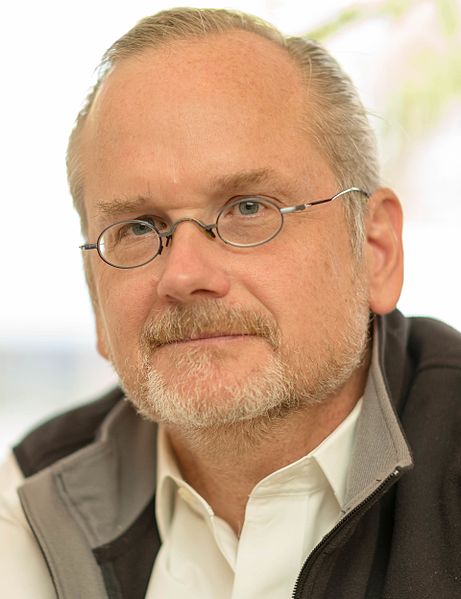 Lawrence Lessig, a professor at Harvard Law School, in May 2017. Photo from Wikimedia Commons.

In reality, Lessig says in his lawsuit, his essay referred to his belief that universities shouldn’t accept contributions at all from people like Epstein who are criminals but whose wealth is not derived from their crimes. Nor should they accept money from people whose wealth derives from harmful or immoral behavior, according to the suit.

Lessig acknowledges that his essay said educational institutions that do take money from criminals should keep the donor’s identity anonymous. That prevents the universities from laundering the donor’s reputation, Lessig says in the suit.

“But Lessig then made an explicit exception to that rule in the context of donations from people like Epstein,” the lawsuit says. The suit cites a section of Lessig’s essay that says the gift, although anonymous, was “a ticking time bomb.”

“At some point, it was destined to be discovered,” the essay said. “And when it was discovered, it would do real and substantial pain to the people within the Media Lab who would come to see that they were supported in part by the gift of a pedophile. That pain is real and visceral and substantial and not taken seriously enough. And every bit of emotion and outrage from victims that I have seen in this episode is, in my view, completely justified by the completely predictable consequence of that discovery.”

Lessig said he had intended to start a national dialogue on developing best standards for accepting and retaining donations from people who engage in wrongdoing. But after the New York Times published the story, those efforts have been destroyed, and Lessig’s reputation has been damaged, the lawsuit says.

Danielle Rhoades Ha, vice president of communications for the New York Times, told Law.com that the newspaper stood by the report.

“When Professor Lessig contacted the Times to complain about the story, senior editors reviewed his complaint and were satisfied that the story accurately reflected his statements,” Ha said in an emailed statement. “We plan to defend against the claim vigorously.”