'Our country needs us, and it needs us now,' Klein tells House of Delegates 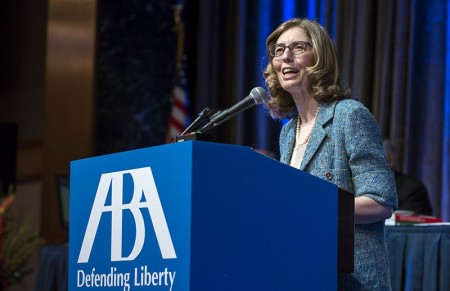 ABA President Linda Klein said "the lawyers of America must lead in bringing people together and defending the values that unite us," in a speech to the ABA House of Delegates at the organization's annual meeting Monday in New York City.

Klein began her remarks by drawing attention to Saturday’s rally by white nationalists and similar groups that left a 32-year-old counterprotester dead in Charlottesville, Virginia. Klein had released a statement Sunday.

“We come to New York to celebrate the rule of law, and what do we see?” Klein asked. “We see people filled with hate coming to the hometown of the author of the Declaration of Independence.

“The principles of tolerance and liberty will always prevail over the forces of hatred and racism. Hate will not rule our country; tolerance and lawfulness will. Nothing is more basic to our profession and to our country.”

Klein called on all American lawyers to continue the association’s mission to defend liberty and pursue justice.

“Our country needs us, and it needs us now,” she said.

Klein began her term in office at the close of the 2016 annual meeting last August. At that time, she had intended to focus on assisting veterans with legal issues; working to ensure children’s access to a quality education; and increasing the resources and tools available to members.

Those were goals that were achieved, and she outlined some of those successes:

• The ABA Veterans Legal Services Initiative was established, and VetLex was launched in partnership with Jones Day to help connect veterans with pro bono attorneys.

• The ABA Commission on the Lawyer’s Role in Assuring Every Child’s Right to a High-Quality Education was established, and it studied how lawyers can contribute to children’s educational opportunities through litigation and volunteering. A printed version of their report will be published shortly.

• ABA Blueprint was launched to assist solo and small firms and provide member-only discounts on firm management products and consultations.

Klein shared an experience she had last August while visiting the USS George Washington, a nuclear-powered aircraft carrier. She met the crew and then was given the opportunity to climb into the “smallest, hottest, fastest plane” she’d ever been in, and be shot off the deck of the carrier via a steam-powered catapult. Only the skill of the crew and laws of physics stood between her and a sharp drop into the ocean.

“So that’s how my year began. And that’s pretty much what it’s been like the whole year through,” Klein said to laughter from the audience.

It was the hard work of a “400,000-member aircraft carrier” that helped her navigate that year, Klein says.

Some of the situations that required response during her tenure were attacks on the independence of the judiciary by President Donald Trump, after his travel ban was blocked by courts; a lawsuit filed by the association against the Department of Education to protect the Public Service Loan Forgiveness program; threats to completely defund the Legal Services Corp.; and a plan by Arkansas to execute seven men in 11 days before their lethal injection drugs expired.

“By focusing on the basics, our ABA was prepared and ready,” Klein says. “We responded quickly and decisively to the challenge.”

One of the successes the ABA had in response to these challenges was with its lobbying efforts on behalf of the Legal Service Corp. Congress is still developing next year’s budget, but the U.S. Senate Subcommittee on Commerce, Justice, Science and Related Agencies has recommended that instead of defunding the LSC, its fiscal 2018 budget should be maintained at $385 million, the same amount the civil legal-aid provider received this year.

At this year’s annual meeting, “It’s Only Fair! An ABA Concert and Rally for the Legal Services Corp.” featured Broadway performers, and grateful recipients of legal aid gathered to support the LSC.

For support throughout the year, Klein thanked her family, ABA staff members and her partners at Baker Donelson Bearman Caldwell & Berkowitz, where she is the senior managing shareholder.

“Thank you for a special year,” Klein said to the delegates. “Our defining moment—our year.”