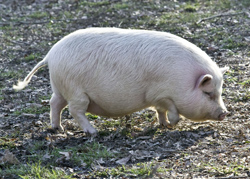 The Iowa Supreme Court has made it more difficult for landowners to sue neighboring hog farms for nuisances created by pollution and odor.

The state supreme court’s June 30 opinion overturned a 2004 decision that created a three-part test for determining when the state’s right-to-farm law was unconstitutional as applied to plaintiffs filing nuisance lawsuits.

The Associated Press, the Iowa Capital Dispatch and the National Hog Farmer have coverage.

The Iowa Supreme Court said constitutional challenges to the law should be evaluated using a rational basis test, a standard that is difficult for plaintiffs to satisfy.

The state supreme court ruled 4-3 against plaintiff Gordon Berg Garrison, a sheep farmer who claimed that a neighboring confined animal feeding operation (known as a CAFO) created a nuisance, trespassed because of manure drainage and violated drainage laws. He estimated that he could smell the hog farm’s “odor more than 100 days of the year, sometimes all day.”

Garrison had claimed that the right-to-farm law was unconstitutional as applied to him under the inalienable rights clause of the Iowa Constitution.

Under the three-part test created by the state supreme court in 2004, plaintiffs could show that nuisance immunity for noneconomic damages was unconstitutional as applied to their case if they received no particular benefit from nuisance immunity for their own operations, they sustained significant hardship, and they resided on their property long before the hog operation began.

The Iowa Supreme Court said the three-part test made Iowa an outlier. All 50 states have right-to-farm laws that give farmers some form of statutory immunity, but Iowa is the only state that has held that the immunity can be unconstitutional, the state supreme court said.

The state supreme court said it was overruling its three-part test “because it was wrongly decided, is difficult to administer, and has been superseded by subsequent decisions using the rational basis test. Applying rational basis review, we reject Garrison’s inalienable rights challenge” to the right-to-farm law, the Iowa Supreme Court said.

The Iowa Supreme Court also said Garrison had not shown causation for his trespass and drainage claims and had not shown that he could sue under an exception in the right-to-farm law.

The state supreme court said it was not deciding whether the right-to-farm law could be unconstitutional under the takings clause because Garrison failed to preserve the argument.