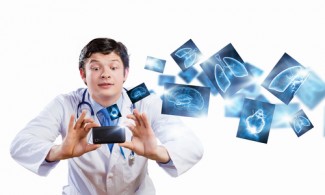 It was intended to be a joke shared with a fellow worker at a California hospital, an anesthesiologist said in a deposition. But the stickers he admittedly placed on the face of an unconscious colleague who was having surgery led to a lawsuit against him and the medical facility.

When another worker showed Veronica Valdez a photo she had taken of the anesthesized woman with a fake mustache and yellow teardrops stuck to her face during the Torrance Memorial Medical Center procedure, “I felt violated. I was in shock,” Valdez said in documents filed in the Los Angeles Superior Court case. Although the woman who took the photo said she deleted it after showing it to Valdez, others said they saw a surgery picture of Valdez on Facebook, the Los Angeles Times reports.

Her invasion of privacy case is set for trial early next year. The hospital reported the Valdez incident to regulators, and those involved were disciplined. But the hospital contends her lawsuit allegations are “factually inaccurate, grossly exaggerated or fabricated.” Meanwhile, some hospitals ban cellphones and cameras in the operating room in an effort to avoid such situations.

“The idea that people are using their cellphone or even have one in the operating room is crazy,” Dr. Deborah Peel of Patient Privacy Rights tells the newspaper. “It’s a massive security risk and incredibly insensitive to patients.”

A similar joke in Washington state involved fake boar tusks temporarily put by a dentist in the mouth of his assistant during oral surgery. It resulted not only in a lawsuit but an initial denial of coverage by his malpractice carrier, as an earlier ABAJournal.com post details.