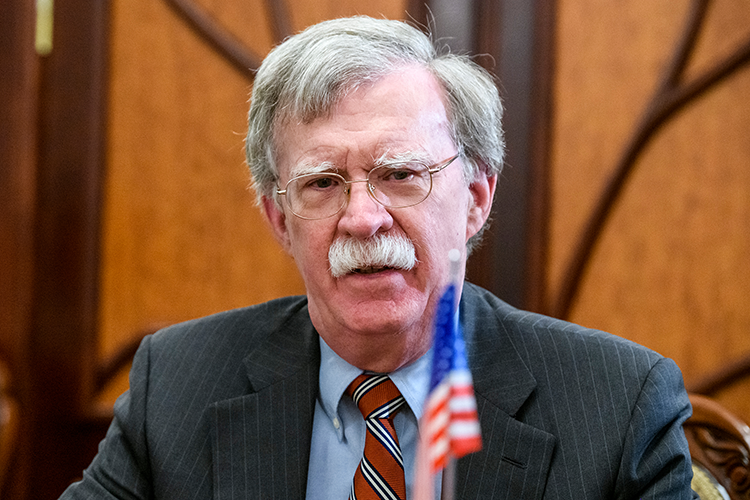 John Bolton on a trip to Ukraine in 2018 as National Security Adviser. Photo by paparazzza / Shutterstock.com.

A political appointee with little or no training in reviewing manuscripts for classified material was assigned to review former National Security Adviser John Bolton’s book even though a career official deemed the book ready for publication, according to a court filing.

The career official, Ellen Knight, said the secondary review was used in the White House’s effort to block publication of the book, The Room Where It Happened. Her views were expressed in a Sept. 22 letter filed with the court and written by her lawyer, Kenneth Wainstein of Davis Polk & Wardwell. The New York Times has coverage.

The political appointee who reviewed the book was Michael Ellis, a former aide to Republican U.S. Rep. Devin Nunes of California. During the time in question, Ellis was the deputy legal adviser to the National Security Council and then the NSC senior director for intelligence programs. Knight was senior director for records access and information security management for the National Security Council.

Knight was not initially aware Ellis was conducting the review and was originally told clearance delays were due to COVID-19. He conducted the review from May 2 to June 9, then received training in how to conduct classified reviews.

The letter says Knight is concerned about politicization of the prepublication review process because authors who lose confidence in that process will find ways to publish or release their works without submitting them for review.

Knight said her team’s review of Bolton’s book began when they received it on Dec. 30, 2019. 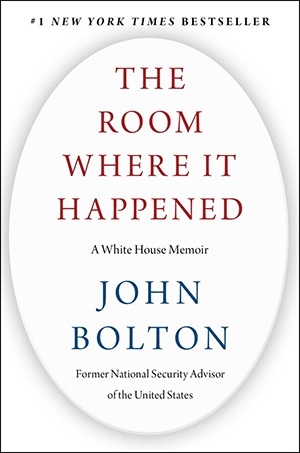 “Upon the first reading,” the letter said, “it was apparent to Ms. Knight that the manuscript contained voluminous amounts of classified information and that it would take a significant effort to put it into publishable shape. The ensuing review ultimately became the most intensive prepublication review process in recent memory at the NSC.”

The legal office of the National Security Council requested a copy of the manuscript and the case file on Jan. 6. It then “immediately started playing what was, in her experience, an outsize role in the review process,” the letter said.

As an example, on one occasion Bolton’s lawyer Charles Cooper had asked Knight’s staff to prioritize the Ukraine chapter of his book to make it publicly available for the impeachment trial of President Donald Trump. Ellis instructed Knight to temporarily withhold any response.

The NSC legal office oversaw correspondence with Bolton and his lawyer, Charles Cooper, and directed Knight to use the telephone rather than email when speaking with the office about her communications with Bolton and Cooper.

Knight said her team “meticulously identified” information they deemed to be classified, then conducted “countless hours of research” to determine whether the information was already publicly available. The team’s concerns led to a four-month review process with Bolton, who “had been gruff and demanding” but appeared committed to cooperate in the review.

Knight said all her concerns were addressed and the review process ended on April 27. The next day, Knight contacted the legal office of the National Security Council to convey her findings. Knight was instructed to stand by and to tell Bolton the review process was “ongoing.”

Knight said Ellis’ review did not consider whether material deemed classified was already part of the public record. Instead, Ellis had reviewed the book as if it were a government document subject to a classification review.

Though Knight was pressured to chalk up her disagreement with Ellis’ review as a difference of opinion, that was not the case, she said.

Knight refused to sign a declaration presented to her that would be used by the government in a lawsuit.

The Justice Department filed its lawsuit on June 17. The government sought to delay publication of the book and an order placing a constructive trust on any profits obtained from its dissemination.

U.S. District Judge Royce Lamberth refused to block publication of the book in June, noting that more than 200,000 copies of the book had already been shipped.

Lamberth added that he reviewed classified declarations by the government, and he was persuaded that Bolton “likely jeopardized national security by disclosing classified information.” Lamberth said Bolton could have sued the government over his dissatisfaction with the review process, rather than opt out of it before the conclusion.

Bolton’s book reported that President Donald Trump sought favors or approval from many authoritarian leaders, and Trump also suggested that he would be willing to halt criminal investigations of some companies as a favor to those leaders.

“The pattern looked like obstruction of justice as a way of life, which we couldn’t accept,” Bolton wrote.

Knight said she was not taking sides in the litigation, and she does not take issue with all the actions of the government attorneys with whom she interacted. Nor does she align herself with Bolton and his decision to publish a book, “aside from supporting his constitutional right to do so in accordance with the prepublication rules.”

But she did express concern with litigation over Bolton’s motion for discovery in the litigation. The letter notes that Bolton wants to explore whether the White House acted in good or bad faith in its handling of the prepublication review. The government has maintained it is irrelevant whether the White House acted in bad faith, so there should be no exploration of the issue in litigation.

“If the government prevails with that discovery argument, the court and ultimately the public, will be denied a full understanding of how the prepublication review of Ambassador Bolton’s book was conducted,” the letter said.

Knight’s job was a two-year detail set to end in August 2020. She had been promised she would become a direct-hire employee at that time who remains in place at the National Security Council during different administrations, the letter says. She was later told, however, that there is no path forward for her at the NSC.