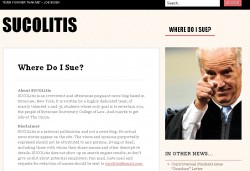 Len Audaer isn’t disclosing whether he’s the author of a satirical blog about Syracuse University’s law school, but the 2L has revealed that he is now the focus of a harassment investigation because of the blog content.

Audaer received an e-mail on Friday notifying him of the investigation based on a student complaint, the Daily Orange reports. Officials told Audaer they suspect he is the author of the SUCOLitis blog and they may seek computer evidence as confirmation.

The blog uses real names and fake quotes, the story says. One blog post identified a 1L as promiscuous, while another attributed a made-up quote about the attractiveness of 1Ls to a law professor at the school. The blog was accessible to the public before the Daily Orange published its story, but it has since been restricted to those who have login credentials.

Syracuse law professor Gregory Germain is designated to investigate complaints against students accused of violating the student code of conduct. Germain told the Daily Orange that free speech isn’t an issue if comments are libelous. “‘My right to swing my arm ends where your nose begins,’ is the old saying,” he told the publication.

Germain told the ABA Journal in an e-mail that he’s no fan of the blog. “Yes, I think the blog was designed to be offensive, and is in very bad taste,” Germain said. “I also think that students who make anonymous blog posts to ridicule and embarrass other students deserve the enmity of the community. In my opinion, immature, cowardly bullying should be strongly condemned, especially in a professional school where we have a responsibility to train students to be lawyers who must demonstrate a high standard of honesty, integrity, fairness, confidentiality and judgment.

“With that said, however, I have no intention of charging a violation of our code for exercising bad judgment or showing bad taste. I can only make a charge if I believe that the line between bad judgment and taste on the one hand, and harassment on the other hand, has been crossed.”

If he decides to prosecute, Germain says, the case will go to an independent faculty hearing panel. “A student charged with violating our code of student conduct is afforded ample due process,” he said. “Like any prosecutor, I must prove the case.”

Updated at 10 a.m. to include comments from Germain. Updated on Oct. 21 to say that the blog is no longer available to the public.