St. Louis lawyers who brandished guns at protesters can continue to practice law 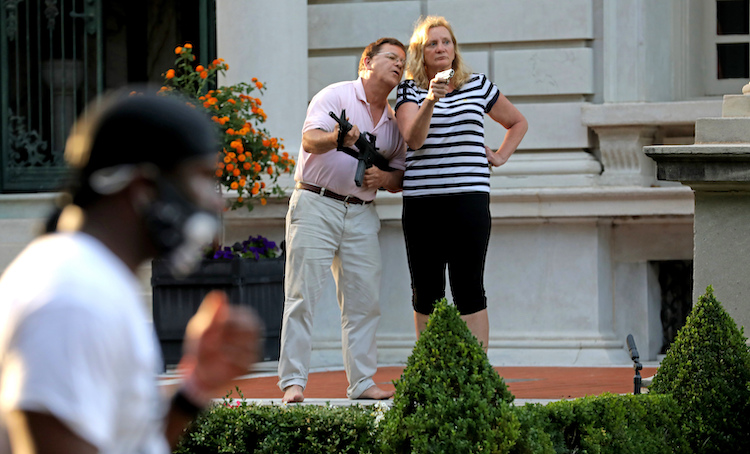 St. Louis lawyers Mark and Patricia McCloskey have received a stayed suspension of their law licenses for brandishing guns as protesters marched through their neighborhood in June 2020.

Further discipline could be imposed on Mark or Patricia McCloskey if they fail to stay out of disciplinary trouble during a probationary period of one year, according to terms and conditions (here and here). They will each have to submit quarterly reports and provide 100 hours of pro bono service.

Mark McCloskey told the Associated Press that he and his wife respect the Missouri Supreme Court’s decision, although they disagree.

But he plans to consult with his attorney about the possibility of asking the U.S. Supreme Court to hear the case.

Mark McCloskey is a Republican candidate for the U.S. Senate. Last week, he testified in a support of a Missouri bill that would shift the burden of proof in self-defense cases, the St. Louis Post-Dispatch previously reported.

The bill would create pretrial immunity hearings in which a defendant can make a self-defense claim. The state would have to prove by clear and convincing evidence that the defendant isn’t immune from prosecution. Currently, the defendant has the burden of raising and proving self-defense during trial.

One opponent has called the bill the “Make Murder Legal Act.”

ABAJournal.com: “Are lawyers who pointed guns at protesters protected by the castle doctrine?”

ABAJournal.com: “How Black female prosecutors are challenging the status quo and fighting for reform”