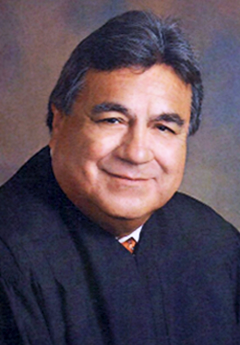 A Texas judge who had been elected to the state’s 13th Court of Appeals has been convicted for taking bribes while working as a lower court judge in Hidalgo County.

Judge Rodolfo “Rudy” Delgado of Edinburg was convicted on charges of conspiracy, bribery and obstruction of justice Thursday following a six-day trial, according to a press release. The Brownsville Herald and the Progress Times have stories. Delgado was suspended in January hours after he was sworn in as an appeals judge. Delgado received his license to practice law in 1982, according to his bio on the Texas Judicial Branch website.

Delgado was convicted with the aid of criminal defense lawyer Noe Perez, who agreed to cooperate with the government after being confronted by FBI agents. Perez told the agents that he bought firewood from Delgado at inflated prices and sometimes gave the judge money hidden in six packs of beer.

Perez told jurors about an early transaction with Delgado. A client had paid his legal bills with a pickup truck worth about $15,000, and Perez gave the truck to Delgado in 2008 after he expressed interest in it. Perez testified that he felt intimidated because he was a new lawyer, and he didn’t want to jeopardize his standing with Delgado, according to Brownsville Herald coverage.

In one of four recorded meetings between Perez and Delgado, the lawyer gave the judge a white envelope filled with $5,500 in cash. After Delgado learned of the investigation, he referred to the money as a campaign contribution in a text to Perez and said it had to be in the form of a check.

The bribery charges were based on that transaction and two others in which the judge received a total of about $520 in cash. All were based on meetings after Perez began cooperating with the government in November 2016. Prosecutors said Perez’s clients were released from jail pending trial as a result of the bribes. The conspiracy charge was for conduct dating back to 2008.

The obstruction of justice charge was based on the text message referring to the cash as a campaign contribution.