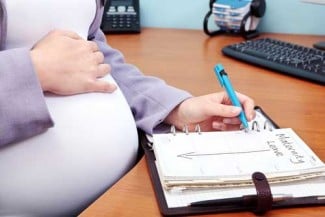 An indignant lawyer blasted a colleague in a text for leaving her law firm following paid maternity leave.

“What you did—collecting salary from the firm while sitting on your a- -, except to find time to interview for another job—says everything one needs to know about your character,” the text said. “Karma’s a b- - - -. Rest assured regarding anyone who inquires, they will hear the truth from me about what a soul-less and morally bankrupt person you are.”

Law360, Above the Law and Cleveland.com have stories on the text message posted on LinkedIn and the outrage that followed.

The Cleveland Metropolitan Bar Association was flooded with angry calls, texts and emails from members expressing outrage and demanding action. The Cleveland law firm that employed the senior attorney who wrote the message, Zashin & Rich, released two statements by co-managing partner Stephen Zashin. He called the text “inappropriate and unprofessional” and apologized to the lawyer who received it.

And the lawyer who wrote the text, Jon Dileno, has also apologized. He is no longer with the firm, which focuses on workplace and family law.

“I want to apologize to my former colleague regarding the inappropriate and disrespectful text that I sent to her,” Dileno said in an email published by Cleveland.com. “The thoughtless words do not reflect my values nor the values of Zashin & Rich, and I am sorry for any hurt that I may have caused.”

Dileno’s text was posted on LinkedIn by Kelley Barnett, senior vice president and counsel for AmTrust Financial Services Inc. The post identified the sender as “Jon” with the initials “JD.”

Barnett said the lawyer who received the text was expected to work while on maternity leave.

“There is no universe in which this kind of behavior (in writing or not) should be acceptable,” Barnett wrote. “Law firms, and the lawyers within law firms, should not be sovereign entities where deplorable behavior like this goes unchallenged. Firm culture is defined by (among other things) what is tolerated, not the words and pictures on firm websites and marketing materials.”

Barnett’s post had more than 2,000 comments as of Wednesday around noon.

The Cleveland Metropolitan Bar Association is hosting a free “Hot Talk” on Jan. 17. The program will feature experts who “will help us dig into the legal and ethical issues related to this situation and the many like it that rarely become public.”