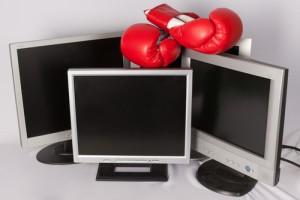 The Colorado Supreme Court has ruled that the phrase “intended to harass” in its cyberbullying law violates First Amendment protections, as well as a free speech provision in the state constitution.

The state supreme court said in a March 28 opinion the phrase “is substantially overbroad on its face, impermissibly encroaching on protected speech.”

The court ruled in the case of Alfred Moreno, who was accused of online harassment for a Facebook post alleging that a woman had a sexually transmitted disease. He addressed the post to anyone on his friends list who was having sex with the woman.

The state supreme court said “intended to harass” could restrict protected speech. The court severed the phrase from the statute, leaving in place the ban on electronic communications that are obscene or that threaten bodily injury or property damage.

“Cyberspace is the modern public square, and it is teeming with eager listeners,” the court said. “When the unrestrained choose to lob insults into the digital arena, those insults can metastasize. Casual slights spread and intensify.”

Nonetheless, the court said, citing another opinion, “First Amendment protection is not limited to amiable communications.”

On the contrary, people often communicate in a manner intended to harass to emphasize a point, the court said. Such communications could include warnings about the need to combat a public health threat, to seek shelter from a tornado, or to respond to an active-shooter situation, the court said.

Or writers could communicate in a manner intended to harass when they post negative restaurant reviews, send irate emails to contractors, post diatribes on public officials’ social media accounts, or leave negative comments on news sites.

The court said it sympathized with those “who become the target of gratuitous and unfounded insults,” but the alleged invasion of privacy was not a sufficient ground to shut off discourse. And those who dislike a communication can do something about it.

“Today, the swipe of a finger can often block, or at least delete, unwanted electronic communication,” the court said. “This is a small price to pay for freedom of speech.”

The case is People v. Moreno.

Hat tip to How Appealing, which linked to coverage by the Denver Post and the Volokh Conspiracy.