A legal dispute between the online legal marketplace UpCounsel and a dissatisfied shareholder is shedding light on why UpCounsel announced this week that it is planning to shut down March 4.

UpCounsel entered into a license agreement with LinkedIn Corp. that required the shutdown, according to court declarations by UpCounsel founders Matthew Faustman and Mason Blake. Approximately 88% of UpCounsel’s stockholders and its board approved the asset-transfer deal.

The LinkedIn deal, as outlined to shareholders in October before the vote, provided that UpCounsel would “be migrating certain assets, clients, lawyers and demand over to LinkedIn.” Best efforts would be required to move certain employees—including Faustman and Mason—into jobs with LinkedIn.

Money from the deal is being used to pay UpCounsel creditors, wind down the company and “potentially distribute pennies on the dollar” to its “Series A preferred shareholders,” according to Blake’s declaration.

Details from the shareholder notice were included in a breach of fiduciary lawsuit filed Oct. 9 by dissatisfied shareholder Raj Abhyanker, the founder and CEO of patent and trademark law firm LegalForce RAPC. (Abhyanker was named an ABA Journal Legal Rebel in 2013).

Abhyanker’s suit says he informed the UpCounsel defendants numerous times that he would like to buy the assets of the company in the event of a shutdown, but he wasn’t given the chance.

Abhyanker filed the suit on behalf of his family trust, which acquired UpCounsel stock in a settlement of a prior suit that he filed against UpCounsel on behalf of LegalForce RAPC.

Abhyanker’s prior suit had alleged that UpCounsel misrepresented its fee structure and manipulated search engine results to display fabricated ratings for its freelance lawyers. A federal judge in Oakland, California, had allowed those claims in January 2019 but dismissed others. A March 2019 court filing said the case had settled with the right to buy stock.

Abhyanker told the ABA Journal on Monday that he was authorized to disclose only that he had become a “significant shareholder” in UpCounsel following the settlement.

Blake’s declaration, however, said people related to LegalForce RAPC owned only 3% of the company’s common stock.

Abhyanker was back in court Wednesday in his more recent lawsuit when he sought a temporary restraining order to prevent UpCounsel from dissolving pending further court action. The San Francisco superior court denied the TRO motion, saying it wasn’t warranted at this stage of the litigation. according to Abhyanker.

In a declaration supporting his TRO application, Abhyanker said hundreds, if not thousands, of attorneys depend on the UpCounsel platform for their livelihood. 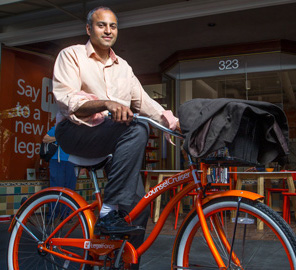 “Numerous ones of these attorneys have reached out to me over the past day asking that the dissolution of UpCounsel be terminated,” Abhyanker wrote.

The attorneys contacted Abhyanker after he told the ABA Journal on Monday that he thought UpCounsel could survive with retooling. The licensing of assets to LinkedIn was not publicly known at the time.

“I don’t think I’m content with UpCounsel just going off into the sunset,” Abhyanker had told the ABA Journal on Monday. “My plan and my hope is that we will retool it and bring it back in a form that will allow it to continue thriving and doing the good work that it does.”

Faustman and Blake are trying to get Abhyanker’s latest California lawsuit dismissed. They cite a forum selection clause that requires stockholders to file any breach of fiduciary lawsuit in Delaware.

Abhyanker isn’t giving up. On Thursday, he told the ABA Journal that he planned to sue LinkedIn.