What are the worst Supreme Court decisions ever? 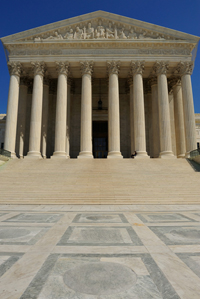 Every lawyer has his or her least-favorite U.S. Supreme Court decisions—and this may be especially true for Supreme Court justices themselves.

Last week, retired U.S. Supreme Court Justice John Paul Stevens testified at hearings on campaign finance law in the wake of McCutcheon vs. FEC, the Supreme Court’s ruling earlier this month which ended aggregate contribution limits for candidates and political parties. Stevens was a dissenter in Citizens United v. Federal Election Commission and has previously criticized it; in his remarks (PDF) at the hearing that “the central error in the court’s campaign finance jurisprudence is the holding in the 1976 case of Buckley v. Valeo that denies Congress the power to impose limitations on campaign expenditures.”

Another Supreme Court decision that has been publicly criticized is Stevens’ own in Kelo v. City of New London, which Justice Antonin Scalia has publicly panned. In February, Scalia also spoke about another excoriated case, Korematsu v. United States, which upheld Japanese internment during WWII. The 1944 court got it wrong, Scalia said—“but you are kidding yourself if you think the same thing will not happen again.”

And back in 2009, the ABA Journal highlighted what historians, court scholars and others believe to be the worst U.S. Supreme Court decisions, including Dred Scott v. Sandford and Plessy v. Ferguson.

So this week, tell us: What are the worst Supreme Court decisions ever? And tell us why you think so.

Read the answers to last week’s question: What is the most outrageous thing you have ever heard a witness say on the stand?

Posted by Mark D. Parker: “Prosecutor: ‘Did you, Mr. Defendant, on June 6, 1997, call Mr. Jones and tell him you were going to rip off his head and urinate into his exposed windpipe?’

Defendant: ‘What day was that again?’ “