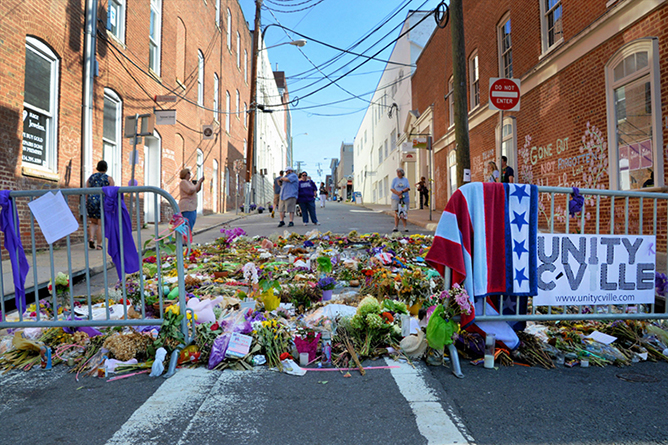 Memorial flowers and notes were left at the spot where paralegal Heather Heyer was killed and others were injured when a car plowed into a crowd of protesters. Photo from Shutterstock.

Jurors found organizers of the violent 2017 “Unite the Right” rally liable under Virginia law Tuesday for a civil conspiracy to commit violence and intimidation.

Jurors awarded more than $25 million in damages to nine plaintiffs, according to a New York Times report.

Law.com, CNN and the Washington Post also have coverage.

Although jurors awarded damages for conspiracy under Virginia law, they did not reach a verdict on allegations of a federal race-based conspiracy under the Ku Klux Klan Act. Among those liable for damages were 12 white supremacists, including Richard Spencer, a featured speaker who coined the term “alt-right;” Jason Kessler, the lead organizer of the “Unite the Right” rally; and Christopher Cantwell, who became widely known as the “crying Nazi” after an emotional video of him was posted when a warrant was issued for his arrest in a separate case.

The nine plaintiffs had been injured during the rally in Charlottesville, Virginia; seven of the plaintiffs were injured when a neo-Nazi plowed his car into a crowd of racism protesters, killing Charlottesville paralegal Heather Heyer, according to a press release by Integrity First for America, which supported the plaintiffs.

CNN reports that each individual defendant is liable for $500,000, while five organizations are each liable for $1 million. In addition, the car driver, James Fields, was found liable for $12 million in punitive damages, according to Law.com. He is serving a life sentence for Heyer’s death.

ABAJournal.com: “Can employees like those who took part in Charlottesville rally be fired?”