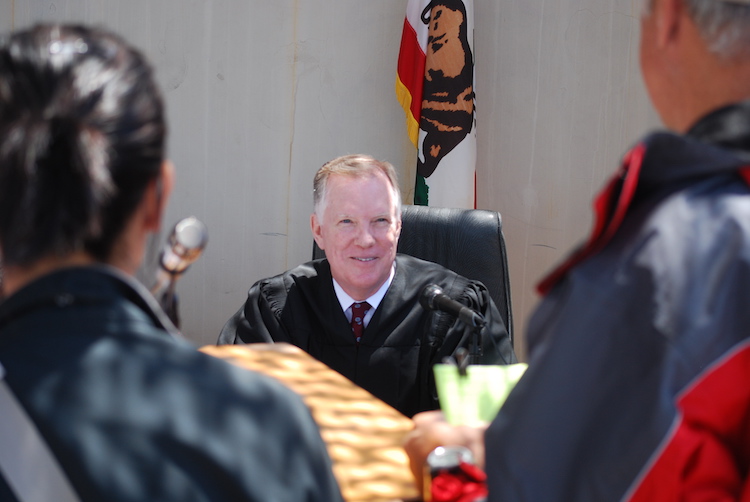 When asked about the importance of homeless courts, Jeff Yungman’s thoughts go to a sick man who was living in the woods and panhandling on the streets. He received several citations for blocking the sidewalk, which came with fines and fees he would never be able to pay.

The man went to One80 Place, a homeless shelter in Charleston, South Carolina, that not only offers on-site legal services but also a program that brings a judge in to conduct monthly hearings for people who are charged with crimes related to homelessness. In exchange for working toward stability, their charges are dismissed, their fines and fees waived.

“We got him into the homeless court and got him a case manager here who would work with him,” says Yungman, the director at One80 Place Legal Services. “We got him approved for disability, and he now has his own place.”

“Having people like him, we can see why the homeless court is needed and why he probably still would be in the woods if there hadn’t been some intervention for him,” he adds.

The Charleston program is one of at least 50 homeless courts across the country, according to the ABA Commission on Homelessness and Poverty, a driving force behind the movement since it began in the late 1980s. It provides technical assistance and resources, as well as in-person trainings, to jurisdictions interested in starting programs.

Yungman confirms that the commission helped get the Charleston homeless court off the ground in 2017 by also connecting him with Steve Binder, the deputy public defender who established the first homeless court in San Diego. He traveled to meet Binder, and after watching his court in action, brought best practices back to Charleston.

“If I was not a member of the ABA and associated with the Commission on Homelessness and Poverty, none of this would have happened,” says Yungman, who is now a liaison to the commission. “They have been supportive, and actually, I steal any idea they come up with and use it as my own.”

How to start a movement

In 2003, the ABA adopted policy urging courts to endorse homeless court programs “as treatment-oriented diversionary proceedings that may result in the dismissal of misdemeanor offenses upon completion of shelter/service agency activities.”

Three years later, the ABA adopted additional policy that outlined seven principles for homeless court programs, including that community-based service providers should establish criteria for individual participation and that prosecutors, defense counsel and the court should approve that criteria.

The resolution also asked that individuals who participate in treatment or services not receive sanctions, such as fines, community service or custody.

Antonia Fasanelli was chair of the Commission on Homelessness and Poverty when she helped launch the Baltimore homeless court program in 2013. She was invited to get involved by Maryland Court of Special Appeals Judge Albert Matricciani Jr., who was then serving on a mayoral-appointed advisory group that focused on ending homelessness.

“He heard about the ABA model and thought it was a good idea,” says Fasanelli, the executive director of the Homeless Persons Representation Project, a legal services and advocacy organization. “He got the district court chief judge involved, John Hargrove, and then the state’s attorney at the time got on board. Then the public defender got involved, and we were brought in as the primary civil legal aid provider to people experiencing homelessness.”

Fasanelli brought the ABA’s policy to other local partners such as the Baltimore Mayor’s Office of Human Services and United Way of Central Maryland, who also agreed it should be followed. 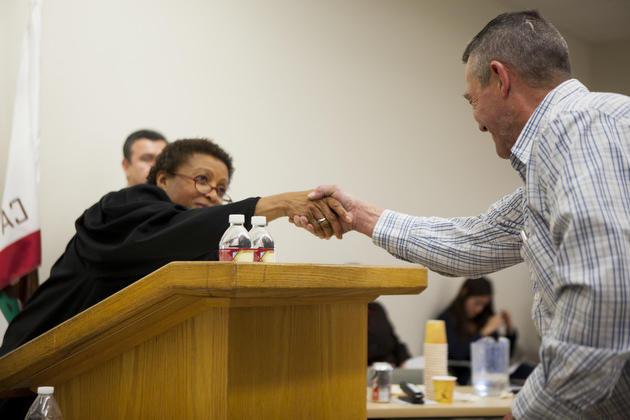 “We all recognized that nothing is really served by folks experiencing homelessness who just cycle through the criminal justice system, many of whom never know there are open warrants because they aren’t able to receive their mail,” she adds. “And the existing court programs weren’t particularly effective at helping people experiencing homelessness, so we created this special docket.”

According to a five-year report that was released in 2018, 220 of the 287 individuals who participated in Baltimore’s Docket for Homeless Persons completed the program and had their cases dismissed.

Like Yungman and Fasanelli, Jayesh Patel also sought the guidance of the Commission on Homelessness and Poverty and Binder, who now serves as one of its special advisors, when starting Detroit’s homeless court in 2012.

Patel, the president and managing attorney of Street Democracy, a legal services nonprofit organization, heard about a homeless court in Ann Arbor, Michigan, that was celebrating its five-year anniversary and took a colleague to visit the program. The judge who presided over the court introduced them to Detroit Action, a grassroots organization focused on economic and social justice for the working class, that had visited the court one month earlier.

After the two organizations teamed up, Street Democracy took responsibility for creating the court’s guidelines and processes, while Detroit Action garnered political support.

“The homelessness commission was huge for us,” Patel says. “They put out a lot of white papers on this stuff, and they also brought Binder out to talk to our judges. That was the commission really backing us up, telling our bench that we’re not crazy to ask for this.”

By the end of 2019, Street Outreach Court Detroit assisted 519 people and closed 5,484 cases, according to its latest report. Patel, now a member of the Commission on Homelessness and Poverty and its incoming chair, points out that nearly all cases have traffic-related implications since a failure to appear in court or pay fines in Michigan often results in driver’s license sanctions.

“It compounds their poverty,” he says. “If you are poor and you get one ticket, you will end up with a bench warrant and license suspension. Then you get the next one and the next one, and now you are in a hole so deep, you can’t see a way out.”

He adds that the criminal justice system shouldn’t punish people for not achieving socioeconomic standards set by society. Instead, more courts should use the homeless court model to help them get their lives back on track and reduce recidivism.

“The model advances every parties’ long-term interests, utilizes rather than duplicates service provision and is flexible enough to address nearly any social problem that unfortunately finds its way into the criminal justice system,” Patel says.

Plan for the future

Commission members who focus on creating more homeless courts are also thinking about how to improve that process.

One of those members is Matthew Wechter, a deputy public defender in San Diego who became the facilitator of the homeless court when Binder retired in 2018. He also maintains the homeless court’s website, which provides information on how to start new programs.

When Wechter hears from interested jurisdictions, he not only refers them to the commission but also shares the San Diego Homeless Court’s policies and procedures manual. He talks with them over the phone, meets with them in person or invites them to San Diego to observe its program and connect with its local justice partners.

For the past couple of years, Wechter and Patel have worked to create a digital toolkit to help speed up this process.

Wechter hopes that by making it easier for courts, attorneys and service providers to log in and get started, more jurisdictions will open homeless courts.

“It’s hard enough to convince a court that they likely will never receive these fines and fees from an indigent client and to convince a prosecution office to dismiss cases even when they are low-level, nonviolent, nonvictim cases,” he says. “It’s a mind shift to a recognition court.

“The more we can do to recognize a positive trajectory and remove legal barriers after they have done the hard work in their program, that’s what we are trying to do.” 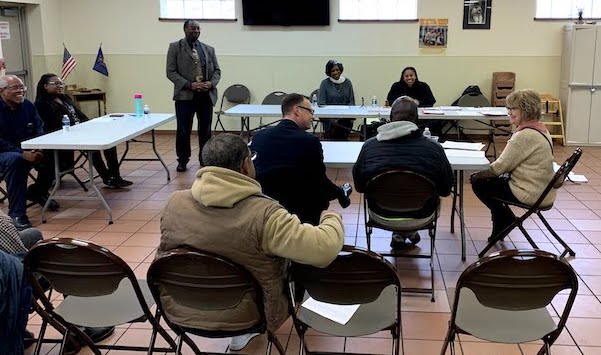 Judge Kristina Robinson Garrett (back table, at right) presides over Street Outreach Court Detroit, which has had its hearings at the Capuchin Soup Kitchen since its first hearing in 2012. Photo courtesy of Jayesh Patel.

Wechter and Patel planned to debut the toolkit at the Commission on Homelessness and Poverty’s Homeless Court Summit in September, but it was put on hold due to COVID-19. They now hope to introduce it at or before the rescheduled summit next May.

The public health crisis has likely affected the opening of new homeless courts as well as the operations of many existing programs. In Baltimore, Fasanelli says the courts recently returned to adjudicating cases after pausing during the pandemic. In San Diego, Wechter says the public defender’s office continued to accept referrals from service providers and the courts have started to accept participants again.

He says the courts plan to hear those matters in the coming months.

Patel contends that he’s seeing more of a “pipeline problem” in Detroit. Since many service providers are now working from home, they have been less likely to talk with individuals about applying for the homeless court program.

He hopes that a shift to text message communications and the court’s acceptance of electronic proofs will help close that gap moving forward.

After being closed for more than two months, the homeless court at One80 Place in Charleston, South Carolina, may be one of the first to reopen. In late May, two of its participants met in Yungman’s office and spoke with a judge over the phone.

With the help of Mary Vosburgh, another One80 Place Legal Services attorney who served as their impromptu public defender, their charges were dismissed.

“We didn’t have everyone come, but we had two who were ready,” Yungman says. “It went well because they had both done an excellent job.”