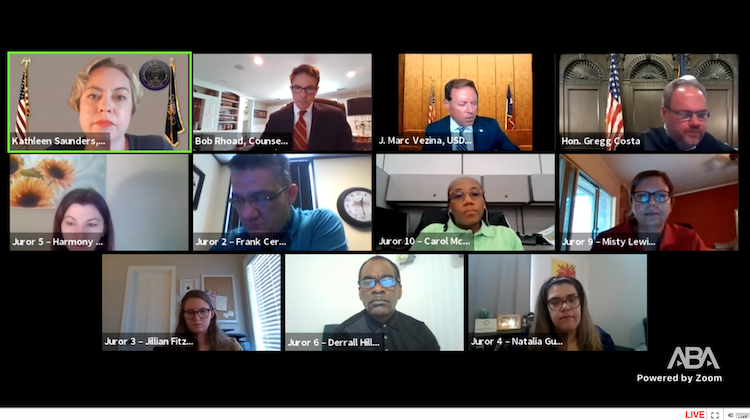 Kathleen Saunders, the former director of nursing at Affirm Senior Living's Summer View facility, was the plaintiff's first witness. She was played by Janis Gorton, an associate at Berg & Androphy in Houston.

Two months ago, organizers for a mock trial program decided to pull together an online version of an event that ordinarily takes two years to plan.

Joel M. Androphy, a partner at Berg & Androphy in Houston and co-chair of the program, has helped organize the biennial National False Claims Act and Qui Tam Trial Institute for several years.

No in-person event was planned for this year. Androphy says the idea to host a virtual version from July 7 to 9 came during a phone call with Michael E. Clark, of counsel at Baker Donelson in Houston and another longtime institute organizer.

“Mike and I decided that, hey, let’s do something different, let’s be at the forefront,” he says. “Everyone talks about virtual this, virtual that, so let’s actually conduct a trial virtually.”

Co-sponsored by the ABA Health Law Section and Section of Public Contract Law, the Inaugural ABA False Claims Act Virtual Trial Program highlighted not only how jurors respond to evidence and arguments presented during a False Claims Act trial but also how litigators can adapt their strategies when these trials are conducted remotely.

Clark, who is also co-chair of the program, explains that in a Federal Claims Act case, a whistleblower files a lawsuit on behalf of the United States and receives a bounty if he or she can establish that a government program was defrauded. He and Androphy decided to revise a past program involving a nursing home chain since these facilities have been at the center of the conversation about the novel coronavirus in recent months.

They also decided to limit the mock trial to two hours each day so it would be more accessible to a remote audience. In addition to using Zoom to conduct the trial, they worked with content delivery services company BeaconLive to stream the program and Precision Reporters to provide a real-time transcript stream of the virtual mock trial.

“We had a number of dress rehearsals and without the dress rehearsals, it wouldn’t have been nearly as smooth,” Clark says. “It benefits the whole ABA to show that they can be the first movers in a technology that may to some extent be the wave of the future, at least for the near future with social distancing issues that are affecting the courts.” 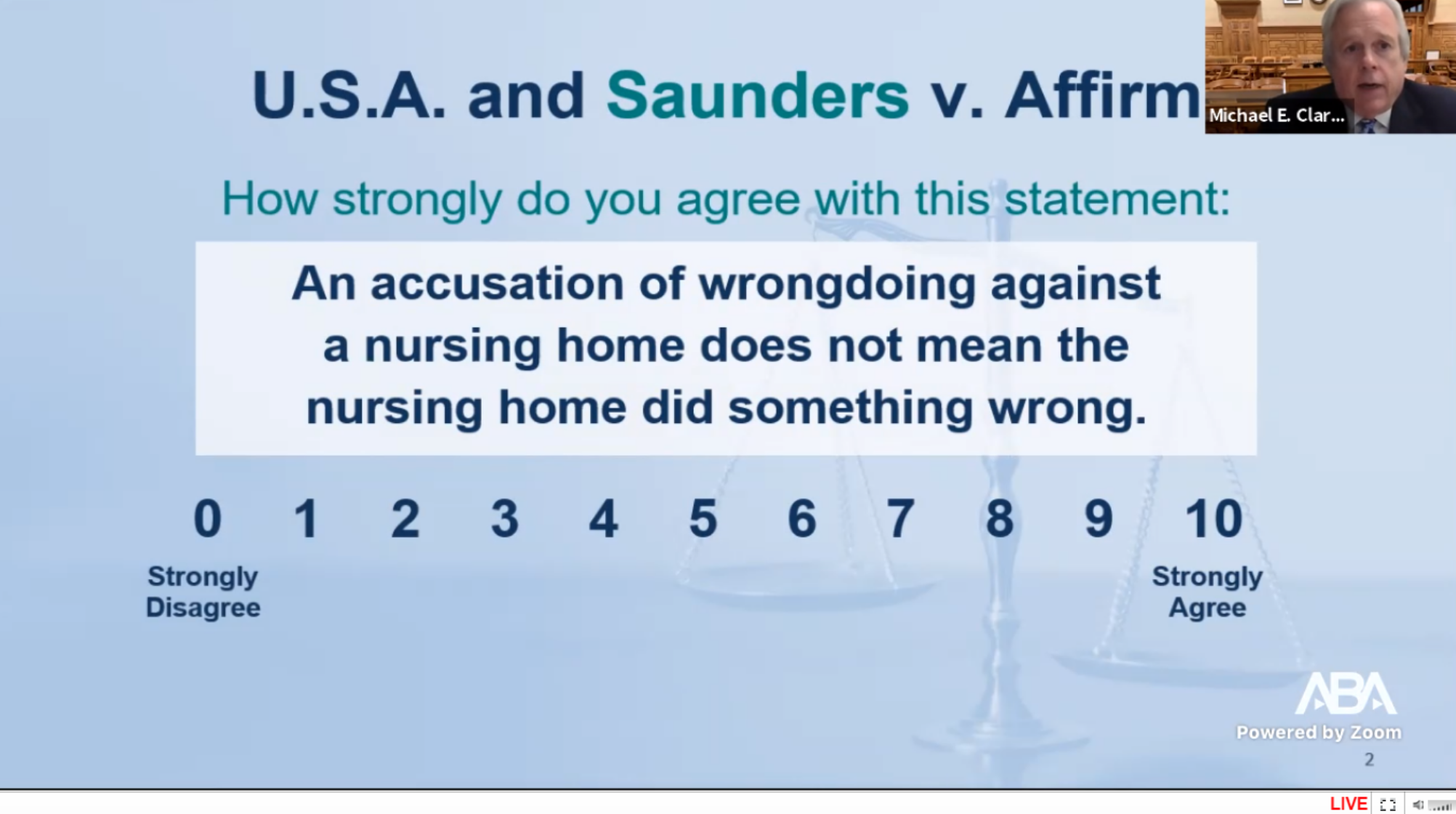 Michael E. Clark, of counsel at Baker Donelson in Houston and co-chair of the program, handled jury selection for the defense.

Clark credits the Health Law Section for “stepping up and devoting the resources that it took to make this work.”

New Orleans-based Judge Gregg Costa of the 5th U.S. Circuit Court of Appeals presided over the virtual proceedings, which began with Androphy and Clark handling jury selection for the plaintiff and defense, respectively.

The plaintiff also called its first witness, the former director of nursing at Affirm Senior Living’s Summer View facility, who brought the lawsuit. Janis Gorton, an associate at Berg & Androphy in Houston, played this role.

On the second day of the program, the plaintiff called a physician familiar with the long-term care industry. The defense also called its witnesses, a nurse who worked for the nursing home chain and a state surveyor who independently audited its operations.

Androphy and Clark delivered their closing arguments on the final day.

“Elder abuse is one of the most underreported crimes in our nation, and we’d like you to send a strong message to them that this needs to be stopped, like all forms of abuse in our country,” Androphy told the jury.

The seven jurors, deliberating on Zoom from their homes or offices during the final day of the program, agreed. They found that Affirm Senior Living knowingly submitted claims for reimbursement from Medicare for medical services that were so deficient, they basically amounted to no care at all. They determined the government was owed $62,938 in damages.

Androphy and Clark consider the virtual mock trial a success, particularly since it attracted more than 160 registrants while the traditional in-person institute typically draws about 100. They also point out that participants were well-prepared and stuck to their truncated time limits.

“That made a more enjoyable case because it went quicker and people had to make sure that they argued their high points,” Androphy says. “It went well from that perspective, and that is going to be something we will look to when we do it live.”

“It’s a fun process, but it’s a learning process,” he adds. “I frankly didn’t care if we won or lost; I just wanted to learn what the jury felt about our case so if we ever have to try one of these cases in real life, we understand.”

When considering the advantages and drawbacks of virtual trials, Clark says that even though Zoom is easy to use, it became clear that it isn’t designed for full legal proceedings.

“One of the things that you lose is the ability to bond with the jury,” he says. “There is a certain dynamic about courtrooms. People have written about courtrooms and how you can look at court proceedings kind of like theater. But on the other hand, you do gain some things because you are seeing the jury very, very close. There are trade-offs.”

Clark adds that throughout the three-day program, the only significant technological issue occurred when participants heard some audio feedback. They stopped proceedings briefly and resolved the problem.

Androphy agrees, saying that although they conducted a virtual trial successfully, the platform doesn’t yet seem like a substitute for a trial that brings everyone to a courtroom.

“It’s hard to get the real deal across because the witnesses are not in person,” he says. “It’s hard to round up everybody and strategize in unison. It’s more fragmented, and because of that, it makes it more difficult.”

They both say they look forward to the next in-person False Claims Act and Qui Tam Trial Institute, scheduled for June 9-11, 2021, at the Fordham University School of Law in New York.

Other participants who played roles in the False Claims Act Virtual Trial Program include: