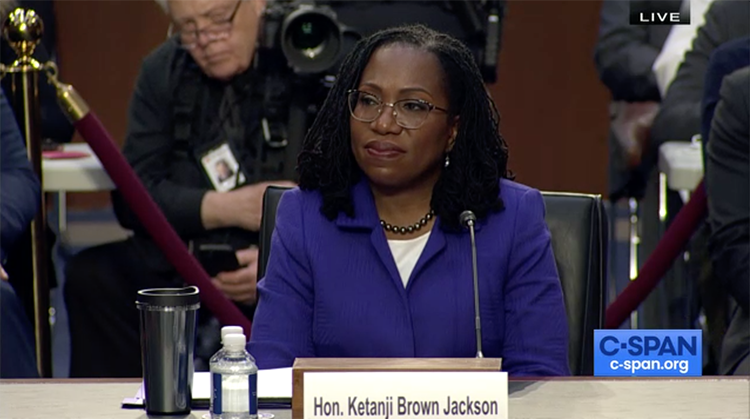 Judge Ketanji Brown Jackson currently sits on the U.S. Court of Appeals for the D.C. Circuit.

Democrats praised Supreme Court nominee Ketanji Brown Jackson as her nomination hearing kicked off on Monday, while Republicans questioned her views and expressed anger over Democratic handling of past nominees by Republican presidents.

Senate Judiciary Committee Chairman Dick Durbin of Illinois was the first senator to give an opening statement as the hearing got underway, calling it a proud day for America. Each senator on the committee will have a chance to speak.

“Your presence here today, your willingness to brave this process, will give inspiration to millions of Americans who see themselves in you,” Durbin, a Democrat, told Jackson.

Durbin said Jackson has a record of excellence and integrity. She has had three judicial clerkships, has worked as a federal public defender and a lawyer in private practice, and has experience as a federal district judge and a federal appeals judge, he said.

Durbin defended Jackson’s work on the U.S. Sentencing Commission in advance of an expected GOP attack on Jackson’s record as being soft on crime. Durbin said the commission was a bipartisan group that voted unanimously when it recommended making the Fair Sentencing Act retroactive. The law had eliminated the disparity in sentencing for powder and crack cocaine.

Another Democratic senator, Patrick Leahy of Vermont, defended Jackson as judicious and even-handed. “Judge Jackson is no judicial activist,” he said. “She is no puppet of the so-called radical left.”

The ranking GOP member of the Senate Judiciary Committee, Chuck Grassley of Iowa, said he will be looking for Jackson’s view of the law, her judicial philosophy, her view of the role of the judge, and her commitment to the Constitution as originally written.

Republicans “won’t try to turn this into a spectacle,” Grassley said.

Grassley contrasted the start of the hearings for then-Supreme Court nominee Brett Kavanaugh, when there were “repeated choreographed interruptions,” with the respectful atmosphere as Jackson’s hearing began.

Republican Sen. Lindsey Graham of South Carolina also pointed to differences in hearings between nominees of Democratic and Republican presidents.

“You will not be vilified,” Graham told Jackson. He added that she won’t be questioned about her religion and she won’t be hit with last-minute accusations. He was apparently referring to questions about Amy Coney Barrett’s anti-abortion views as a Catholic and sexual assault allegations against Justice Brett Kavanaugh, who vehemently denied any wrongdoing.

Graham said he had supported Democratic nominees in the past but “this is a new game for the Supreme Court.” He criticized “a wholesale effort by the left to take down a nomination from my state.” The statement was a reference to Graham’s favored nominee, U.S. District Judge J. Michelle Childs.

Jackson, on the other hand, is supported by “the most radical elements of the Democratic Party,” Graham said.

Jackson will be introduced to the Senate Judiciary Committee later Monday by a former roommate and an appeals judge who reviewed her rulings.

Former Judge Thomas Griffith of the U.S. Court of Appeals for the D.C. Circuit had supported Jackson’s nomination in a letter to the committee last month, the Washington Post reports.

Griffith had reviewed Jackson’s rulings when she was a district court judge before she was elevated to the D.C. Circuit. Griffith said in the letter that he didn’t always agree with Jackson on case outcomes.

“However, I have always respected her careful approach, extraordinary judicial understanding, and collegial manner, three indispensable traits for success as a justice on the Supreme Court,” Griffith said in the letter.

Jackson’s former roommate, Lisa Fairfax, is a professor at the University of Pennsylvania Carey Law School. She roomed with Jackson at Harvard University and Harvard Law School.