Considered one of the top contenders for a U.S. Supreme Court nomination, U.S. Circuit Judge Amy Coney Barrett is known as a conservative who shows a strong deference to religious values.

Barrett, a Catholic, received early notice in 1994 when she was a first-year law student at the University of Notre Dame Law School, according to Politico.

She later became of a law professor at the University of Notre Dame Law School, where she was a member of Faculty for Life, an anti-abortion group at the university. One of her mentors was law professor John Garvey, now president of the Catholic University of America.

Garvey collaborated with Barrett on a 1998 law review article that argued that Catholic judges may recuse themselves from death penalty cases because of the church’s opposition to the death penalty.

The law review article drew attention during Barrett’s 2017 hearing in which she was confirmed to the 7th U.S. Circuit Court of Appeals at Chicago, according to Politico. Sen. Dianne Feinstein, D-Calif., mentioned the article when questioning Barrett about Roe v. Wade.

“The conclusion one draws is that the dogma lives loudly within you,” Feinstein had said.

The expression became a point of pride in Catholic circles and was printed on T-shirts and coffee mugs, the New York Times reports.

“Chief Justice Roberts pushed the Affordable Care Act beyond its plausible meaning to save the statute,” she wrote.

Barrett is a textualist in the mold of Justice Antonin Scalia, for whom she was a law clerk, Barrett’s mentors told the New York Times.

“If Roe v. Wade were coming against the court for the first time, I suspect that she would say there is nothing in the Constitution about this, and if you want a constitutional right to an abortion, people are free to add one to the Constitution, but it is not in there,” Garvey told the New York Times.

In a talk at Jacksonville University in 2016, Barrett said the core holding of Roe v. Wade is unlikely to change, but there could be changes in the ways that states restrict abortion.

Barrett has written nearly 100 opinions since joining the 7th Circuit, and she issued votes in many more cases, according to the Washington Post. Two of the cases concerned abortion. In both cases, Barrett joined dissenters who would have granted rehearings en banc after three-judge panels found fault with restrictive Indiana abortion laws.

In one case, Box v. Planned Parenthood of Indiana and Kentucky Inc., Barrett joined a dissent that said an Indiana parental notice law for minors seeking abortions should have been allowed to take effect. The dissent cited federalism principles that are implicated when states are banned from enforcing abortion laws before they take effect.

The law did not include a traditional judicial bypass provision that allowed minors to show that they had the maturity to make the abortion decision on their own—without notice to their parents. The Indiana law required parental notice in bypass cases, unless a judge concluded that notice is not in a minor’s best interests. The dissent joined by Barrett would have granted en banc review. 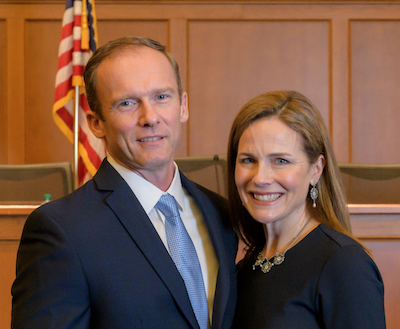 In the second case, Commissioner of the Indiana State Department of Health v. Planned Parenthood of Indiana and Kentucky Inc., Barrett joined a dissent that would have granted a rehearing en banc after a three-judge panel struck down another Indiana law. The law banned abortions for reasons related to sex, race or disability. It also regulated the disposal of fetal remains.

Indiana appealed only the portion of the decision relating to fetal remains. The dissent that Barrett joined nonetheless addressed the other part of the law.

The dissent said the Supreme Court had not decided whether abortions can be banned if they are based on sex, race or disability.

Barrett wrote the opinion in another case, Doe v. Purdue University, which allowed a student accused of sexual assault to sue for alleged violations of the 14th Amendment and Title IX of the Education Amendments of 1972. The Washington Post has coverage.

The Purdue student was expelled from the university’s Navy ROTC program after it found him guilty of sexual violence against Jane Doe. The student alleged that the university violated the 14th Amendment by using flawed procedures to determine his guilt and violated Title IX by imposing a punishment infected by sex bias.

John and Jane Doe had consensual sexual intercourse 15 to 20 times before Jane Doe attempted suicide in front of John Doe, according to John Doe’s lawsuit. At that time, they continued dating but stopped having sex. Eventually, they broke up. Jane Doe later reported that John Doe had groped her and digitally penetrated her without consent when they were sleeping together.

John Doe was given a redacted version of a report by investigators only moments before his appearance before a committee deciding his fate, and he learned that it falsely reported that he had confessed. He was not allowed to present witnesses.

The Washington Post cites several other opinions. Barrett said in a dissent that the Second Amendment is treated as a second-class right when nonviolent felons are barred from possessing firearms. She dissented when a 7th Circuit majority blocked the Trump administration from enforcing its “public charge” rule, which seeks to prevent immigrants from entering the country or receiving green cards or visas if they need public benefits, food stamps or housing assistance. She joined a decision holding that outside job applicants can’t sue for age discrimination using a theory of disparate impact.

But in a ruling for an employee, Barrett said a male butcher could sue for sexual harassment that happened because he was male.

Barrett, 48, has law firm experience, as does her husband. Barrett was formerly an associate at Miller, Cassidy, Larroca & Lewin.

Barrett’s husband, Jesse Barrett, is a law professor at the University of Notre Dame Law School, a lawyer in private practice and a former federal prosecutor.

The Barretts have seven children, including two who were adopted from Haiti and a son with Down syndrome. Barrett learned of the diagnosis during prenatal testing and chose to keep the baby, according to U.S. District Judge Patrick Schiltz, who spoke with the New York Times.

Barrett and her husband are members of People of Praise. According to the New York Times, the group grew out of the Catholic charismatic renewal movement and adopted Pentecostal practices, such as speaking in tongues, belief in prophecy and divine healing.

Corrected Sept. 22 at 10:42 a.m. to state that John Garvey is president of the Catholic University of America.