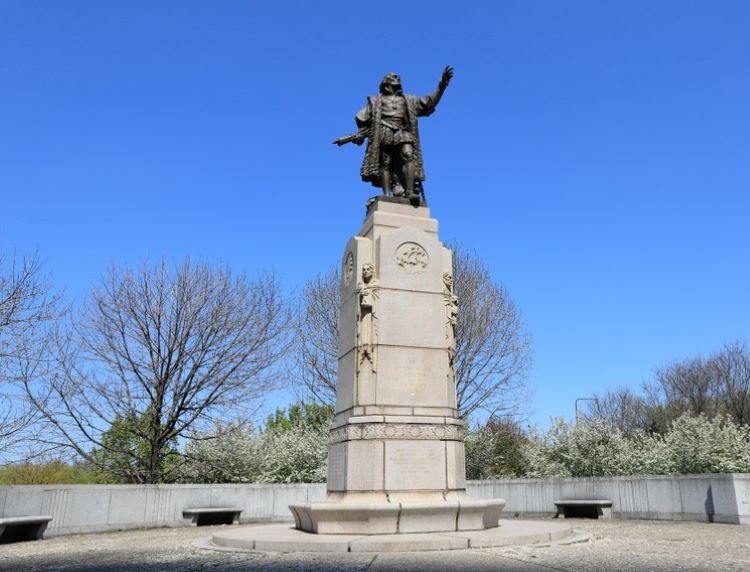 The statue of Christopher Columbus in May 2019 in downtown Chicago. Image from Shutterstock.

The Chicago Park District is seeking to seal a lawsuit filed by a former park district lawyer contending that Mayor Lori Lightfoot defamed him by questioning his legal ability in an obscenity-laced Zoom call.

The park district’s March 18 motion said the case should be sealed because it “contains numerous allegations about conversations surrounding still-pending litigation” over a Christopher Columbus statue that are protected by attorney-client privilege and the work-product doctrine.

The park district filed the motion after seeking to intervene in lawyer George Smyrniotis’ suit against Lightfoot and the city of Chicago.

The Chicago Tribune broke new news of the motion to seal.

Smyrniotis, the former first deputy general counsel of the Chicago Park District, filed his defamation lawsuit March 2. He alleged that Lightfoot defamed him during a Zoom call on Columbus statue controversies when she asked:

Lightfoot lobbed the alleged insults during a conversation about the Columbus statue that was maintained by the Chicago Park District at the Columbus Plaza and removed from Arrigo Park in July 2020. Lightfoot had ordered the statue removed after it became the target of vandalism and protests following the 2020 police shooting of George Floyd in Minneapolis.

The Chicago Park District had agreed to maintain the plaza and statue in 1973 under an agreement that required approval for any substantial changes to the plaza or statue, Smyrniotis’ suit said. The agreement provided that approval for any changes must be obtained from the Columbus Statue Committee or, if that body no longer existed, the Joint Civic Committee of Italian Americans.

The joint civic committee sued in July 2021, seeking to return the statue to the Columbus Plaza. Smyrniotis was assigned to represent the park district. He was told by the park district general counsel to settle as soon as possible, the suit said.

After getting approval from the park district’s general counsel, Smyrniotis allowed the joint civic committee to use the statue during the annual Columbus Day parade, provided that the statue be the last float in the parade and that it be uncovered for only 20 minutes, the defamation suit said. He also proposed a settlement, approved by the general counsel, that would allow the committee to keep the statue if it agreed to remove it from the city of Chicago, the suit alleged.

Unknown to Smyrniotis, Lightfoot told the joint committee that the statue could not be shown in the Columbus Day parade, even for 20 minutes, and that she would pull the parade permit if the committee disagreed, the suit said. The committee acquiesced.

Smyrniotis participated in a Zoom call with Lightfoot and other city and park district officials on Oct. 11, 2021. During the call, the suit said, Lightfoot allegedly told Smyrniotis and the park district general counsel that they are “d- - -s” for making “some kind of secret agreement.”

“My d- - - is bigger than yours and the Italians; I have the biggest d- - - in Chicago,” Lightfoot said, according to the suit’s allegations. “Where did you go to law school? Did you even go to law school? Do you even have a law license? You have to submit any pleadings to [a city lawyer] for approval before filing. [That lawyer] told you not to do a f- - -ing thing with that [statue] without my approval. Get that f- - -ing statue back before noon tomorrow, or I am going to have you fired.”

Smyrniotis claimed that the statements are defamatory because they impute that he lacked an ability to perform his job, and that he lacked integrity in the performance of his job. He also said Lightfoot had no authority to interfere with his representation of the park district.

Smyrniotis said he was forced to resign in February 2022 after suffering great emotional distress. The suit said he would have worked two more years until retirement at age 67, and he will get a reduced pension as a result of the resignation.

According to the Chicago Tribune, Lightfoot has said Smyrniotis’ defamation suit is “wholly lacking in merit,” and his claims are “ridiculous.”

Smyrniotis is represented by Edward R. Moor of the Moor Law Office. Moor told the ABA Journal that he will file a response to the city’s motion to seal on or before April 21.