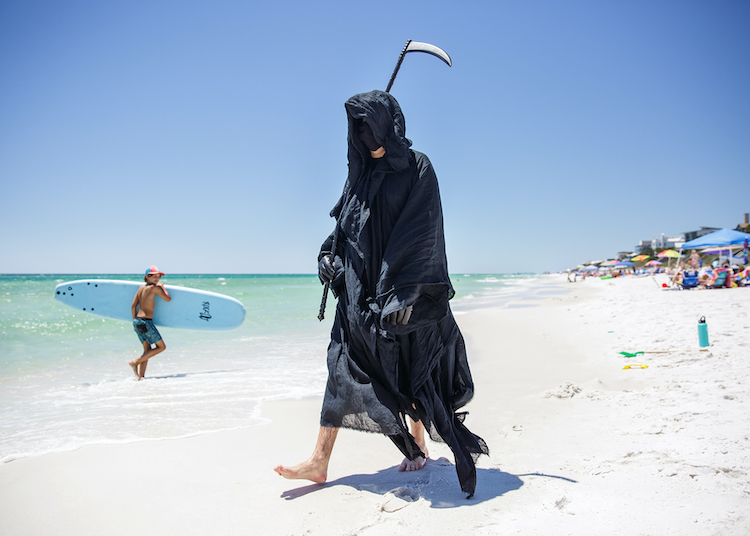 Daniel Uhlfelder: “People like to sit back and complain and tweet, but I like to take action. I try to fix problems." Photo courtesy of Daniel Uhlfelder.

Nothing kills a buzz quite like a visit from the Grim Reaper. At least, that’s what Florida lawyer Daniel W. Uhlfelder is hoping.

“People like to sit back and complain and tweet, but I like to take action,” says Uhlfelder, founder of a three-lawyer general civil litigation firm in Santa Rosa Beach, Florida. “I try to fix problems.”

From the moment that his plastic scythe hit the sand, he’s been big news, appearing on networks such as CNN and Fox and in publications including People magazine and the Jerusalem Post. He even got shout-outs on Saturday Night Live and The Daily Show. And, yes, there are T-shirts.

It may seem comical—a middle-aged man in a flowing, black-linen hooded robe and face mask navigating the sand in flip-flops. But Uhlfelder is dead serious about his mission.

In early March, Uhlfelder was driving home from the office and noticed that the picturesque beaches of his Walton County community were packed with people.

“It was like a dual universe, where everyone around the world is getting ready for a pandemic, and here we are, business as usual,” he says. “I am a second generation Floridian—Florida is in my blood—and this was life or death.”

Haunted by the scene, he immediately began thinking about how he could effect change by leveraging his two most important assets: his law degree and his Twitter following. Twitter came first.

In mid-March, Uhlfelder posted videos of his visit to a local beach and to the Florida governor’s mansion while wearing a hazmat-style suit. Two of the videos have been viewed about 320,000 times. A third, where he interviews spring breakers, has racked up 490,000-plus views.

He also used his social media feed to bring attention to a successful fundraising effort to erect a billboard in Tallahassee, Florida, featuring a photo of Florida Gov. Ron DeSantis and a plea to stay at home—along with its own hashtag, #stayathome, and a petition on Change.org for a statewide beach shutdown.

Then he moved to the courts. In late March, Uhlfelder filed a lawsuit along with Tallahassee lawyer Gautier Kitchen to force DeSantis to close beaches statewide. The suit was unsuccessful; in a telephonic hearing April 7, Judge Kevin Carroll of the 2nd Judicial Circuit in Leon County, Florida, sided with the state but encouraged Uhlfelder to appeal his ruling, according to news reports. Uhlfelder did just that, immediately filing with the Florida First District Court of Appeal.

“I’ve sued the governor; I’ve gone to his office in a hazmat suit; I’ve done a petition—what will it take to wake these people up?” he recalls.

Inspiration then hit him. Uhlfelder quickly put together a costume and made a plan. Then he turned once again to the Twitterverse to get the word out to his 139,000-plus followers. 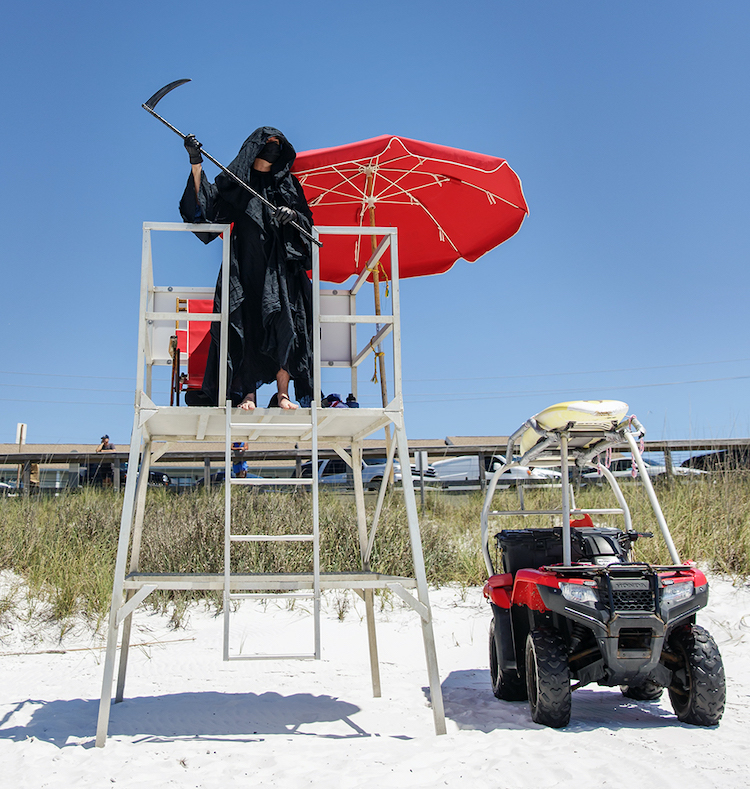 Uhlfelder was aligned with advocates for open access, while Huckabee was among the wealthy beachfront landowners who had secured legislation to prevent the public from accessing any part of the pristine white beaches they owned past the waterline.

When a Twitter user unconnected to the lawsuit solicited ideas for an appropriate nickname for Huckabee, Uhlfelder, referencing the suit, suggested “beach thief.”

Huckabee responded by filing a Florida Bar complaint against Uhlfelder, citing Twitter harassment for critical posts and unflattering retweets. The complaint is pending. Uhlfelder shared the complaint on his Twitter account, and news outlets across the state reported on it.

As a result, Uhlfelder says his follower count increased from about 400 to more than 75,000. He has been steadily growing it ever since.

In addition to raising awareness, Uhlfelder is also using the Grim Reaper tour to raise funds for his Make My Day PAC, which he formed in response to his experience with Huckabee. The PAC benefits Democratic candidates running for federal office across the country who “are standing up to bullies,” he says.

Uhlfelder fully embraces the irony of the current situation—that the man who has spent the past several years advocating for public access to beaches is now campaigning for their closure.

“I want everyone to get back to using the beaches more than anyone, but this is a pandemic,” he says. “I think walking on the beach is good for you, but that’s not the issue. Our county has 60,000 people and limited health care, and when millions of people flood in here from Texas, New York, Louisiana, it’s just not safe. I am trying to protect the beaches and people’s health.”

From the beaches and beyond, Uhlfelder thinks it’s part of his responsibility as a lawyer to use his license to fight for social justice. It’s something that he has done throughout his career—from volunteer work for the NAACP to his multiyear effort to bring down the Confederate flag from the Walton County Courthouse.

He hopes that his actions will inspire others to join his efforts or to stand up in their own communities.

“If all you care about is billable hours and about not upsetting people, you’ll just be automated at some point—you have to have compassion and drive, and I don’t see as much of that as I’d like,” he says.

Uhlfelder also has a message for law students and young lawyers: “You can be financially successful in business and also take on causes; I am living proof of it,” he says.

But Uhlfelder acknowledges that his advocacy has not been without risk. Along with the outpouring of support that he’s enjoyed during his Grim Reaper tour, he’s also endured plenty of criticism, including verbal harassment, threatening emails and phone calls.

But the Grim Reaper tour will continue, he says.

“I am a trial lawyer,” he says. “I am used to being ready for battle.”