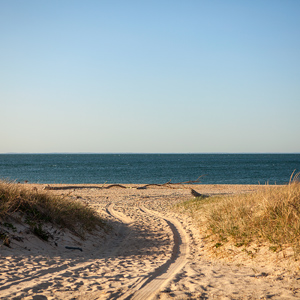 Image of a beach path from Shutterstock.com.

Evidence suggests that stand-your-ground laws are associated with increases in gun homicides, according to a review of scientific literature by the RAND Corp. As of January, more than two-thirds of states had stand-your-ground laws or had expanded the castle doctrine to beyond the home. RAND suggests that states with such laws should consider repealing them. (The Crime Report via the Marshall Project, RAND press release, the report, available for download here, beginning at page 235)

Lawyer says he will visit beaches dressed as Grim Reaper

A lawyer who unsuccessfully sued Florida Gov. Ron DeSantis to close beaches statewide says he will wear a Grim Reaper costume to warn beach visitors about the need for social distancing. The lawyer, Daniel Uhlfelder, said in a tweet and media interviews that wearing the costume will send a signal that beaches are being opened prematurely. (Uhlfelder’s tweet, NBC News, People magazine)

The Third Court of Appeals in Texas has ruled that lawyer Omar Weaver Rosales can’t escape a state disciplinary case based on a federal court sanction. The appeals court said the doctrine of res judicata doesn’t apply because federal courts don’t have the authority to act on a state law license. The federal courts had sanctioned Rosales nearly $176,000 for making false statements about the opposing counsel and $60,500 for filing a frivolous appeal in the case. (Law360)