Pardon me? A look at the broad, yet somewhat-murky clemency powers of a president 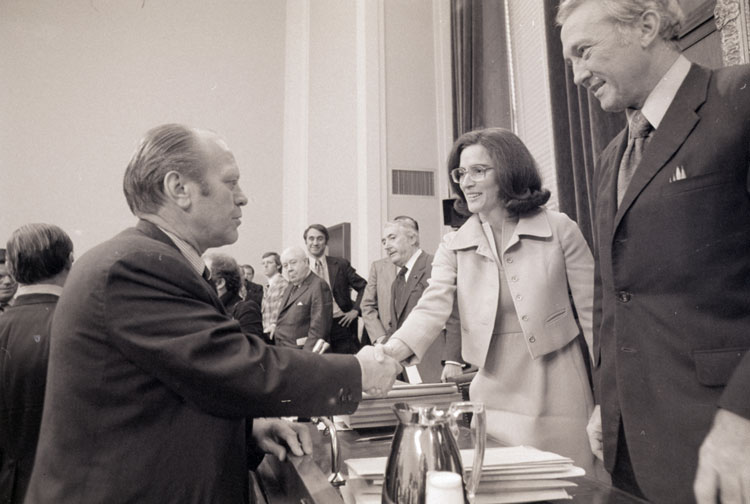 President Gerald Ford shakes hands with Rep. Elizabeth Holtzman, D-New York, in October 1974 in Washington, D.C., after Ford completed his testimony to a House judiciary subcommittee on his reasons for granting a pardon to former President Richard Nixon. Photo from Getty Images.

As a first-term Democratic Congresswoman from New York, Elizabeth Holtzman recalls being the only one willing to ask President Gerald Ford tough questions about the most controversial act of his administration.

One month to the day after becoming the first person ever to occupy the Oval Office without having been previously elected president or vice president of the United States, Ford generated a national outrage by issuing a full and unconditional pardon to his predecessor, Richard M. Nixon, for any and all crimes Nixon may have committed as president.

Holtzman, a member of the House Judiciary Committee who had previously voted in favor of bringing three articles of impeachment against Nixon, found the pardon extremely questionable and wanted answers. For instance, several Watergate figures were set to stand trial, and Holtzman wanted to know how the pardon would affect those proceedings and if the White House had spoken with the special prosecutor.

Most important, she wanted to know what many people were already speculating: Was there a “corrupt bargain” between Ford and Nixon in which Nixon got his pardon in return for resigning? When the committee decided to investigate the pardon, she thought it would be similar to the detailed, fact-finding process utilized during the Nixon inquiry—especially after Ford announced he would take the rare step of appearing before the committee to testify.

“I had just come from the practice of law, and you usually didn’t talk to an important witness without doing preparation,” says Holtzman, who joined Herrick Feinstein in 1994 and is currently counsel at the firm. “I suggested we get the documents relevant to the pardon and call some of the people who participated in the negotiations to interview and question them so we’d be ready. Guess what? The committee refused to do that.”

Instead, it was up to Holtzman to ask the questions herself—and she did so, memorably asking Ford if there had been a quid pro quo. “There was no deal. Period. Under no circumstances,” Ford said in response.

Holtzman sees parallels between Nixon and President Donald Trump—especially when it comes to pardons. She points out that “endeavouring to cause prospective defendants, and individuals duly tried and convicted, to expect favoured treatment and consideration in return for their silence or false testimony” was listed in one of the articles of impeachment against Nixon. “That’s the historical marker,” she says. “That’s a clear abuse of his power, and it’s clearly a high crime and misdemeanor.”

We’re seeing much of the same today with Trump, Holtzman points out.

“We see pardons and commutations and executive clemency issued on very questionable grounds. They’re being dangled before witnesses. Those should have been grounds for Trump’s impeachment, but Congress hasn’t been too interested in acting on pardon issues ever since Watergate,” she says with a laugh.

Presidents have long used the pardon power in ways that have resulted in outrage and controversy. One of the broadest, yet least-understood clauses in the U.S. Constitution, the pardon power has been the subject of renewed focus and attention, thanks to the parlor game of what Trump can or cannot do with regards to granting clemency. Can Trump pardon his family? What about his lawyer? Or his associates who are either in jail or awaiting trial? And the million dollar question: Can he pardon himself?

Perhaps the main reason why there’s uncertainty is because there isn’t a lot of caselaw interpreting the pardon power. “The problem is standing,” says Mark Osler, professor of criminal law at University of St. Thomas School of Law. “The only person who has standing to challenge a pardon is the person who receives it.” Understandably, cases involving a pardon recipient challenging said pardon are rare.

However, it has happened. In Burdick v. U.S. (1915), the Supreme Court ruled that a journalist could reject a conditional pardon in order to plead the Fifth Amendment and refuse to disclose a source. Because a pardon carries an imputation of guilt and acceptance of a pardon is tantamount to a confession, pardon recipients would not be able to invoke the right against self-incrimination.

In fact, Ford referred to the Burdick decision in his post-pardon statement to the House Judiciary Committee and, according to numerous sources, carried a portion of the decision in his wallet.

According to Osler, the pardon clause was designed to be broad and nearly limitless. He says that the president cannot pardon his or her way out of impeachment or pardon others who are being impeached. The pardon cannot reach state crimes and cannot cover crimes that have not yet been committed. That’s pretty much it.

“During the Constitutional Convention, the discussion included whether treason should be an exception to the pardon power, and they formed a committee to examine that,” Osler says. “Edmund Randolph moved to include an exception for treason, arguing that the pardon prerogative was too great a trust—the president may be guilty and the traitors his own instruments—but they chose not to put it in. So, they made it unlimited after a conscious consideration of a self-pardon.”

In that vein, Osler believes that Trump does have the power to pardon himself. Others are not so sure. Mark Tushnet, professor emeritus at Harvard Law School, says there isn’t a simple answer, but that a president can probably self-pardon. “My own view is that it’s an abuse of power, but that no court should find the pardon invalid,” says Tushnet.

Instead, he argues the remedy is a political one. A self-pardon could be used against Trump if he chooses to run in 2024. The other remedy would be impeachment, which can be used against someone who is no longer a public official and carries a punishment in the form of a ban on seeking office in the future.

Holtzman, on the other hand, believes the right to self-pardon would render the Constitution’s entire system of checks and balances into a nullity. “Unfettered power was something the framers never envisioned and never wanted to happen,” Holtzman says. “If the president had self-pardon power, then what president would ever be subject to prosecution, trial and punishment?”

Margaret Love, a former U.S. Department of Justice pardon attorney under Presidents George H.W. Bush and Bill Clinton agrees that Trump does not have the right to pardon himself. However, to her, the real question is how should the pardon system work. Love, who currently works as a solo practitioner in Washington, D.C., specializing in clemency and restoration of rights, says the pardon system has been broken due to decades of neglect and reluctance from presidents to issue them regularly.

“If you look at website of Pardon Attorney, starting from the McKinley Administration, there was a regular, routine drumbeat housekeeping practice of accepting applications, processing them and either granting or denying them. Housekeeping was pretty tidy until the Clinton administration.”

She notes that several factors, including the ongoing war on crime, the imposition of mandatory minimum sentences at the federal level and the greater number of collateral consequences coupled with criminal background checking, made the pardon power more necessary to the operation of the justice system. At the same time, the process for granting clemency was neglected within the Justice Department.

Love notes that grants of clemency became harder to come by, especially after Clinton took office, and that Presidents George W. Bush and Barack Obama did little to restore regularity to the pardon process or control the growing case backlog. Trump, she says, has completely bypassed the established process, granting pardons on the advice of celebrities, political allies and his own whim.

According to the Pardon Attorney’s website, there are over 14,000 pending applications for pardon or commutation of sentence.

However, Love also thinks Trump’s actions could be a blessing in disguise and shine a light on what she calls an outdated remedy. “We have asked too much of the pardon power,” she says. “It has been a big excuse not to reform the legal system and incorporate what we want it to do.”

She points out that the First Step Act, which Trump signed into law in 2018, gives inmates an avenue to apply directly to courts to have their sentences reduced without having to go through the Justice Department first. Another proposed bill, the Recognizing Education, Employment, New Skills, and Treatment to Enable Reintegration, or RE-ENTER Act, would allow courts to issue judicial certificates of rehabilitation—essentially, a judicial pardon. Sponsored by Texas Sen. John Cornyn and co-sponsored by 15 Democratic and Republicans senators, the bill has not been passed by the Senate and would need to be re-introduced during the next session of Congress.

Osler, meanwhile, thinks the federal government could learn a lesson from the states.

“Right now there are seven levels of review—four are in DOJ, which is hopelessly conflicted,” says Osler. “Take that process and replace it with a clemency board that has a staff and reviews the cases and make recommendations directly to the president. That’s what the highest functioning states have. It works, and we should learn from them.”