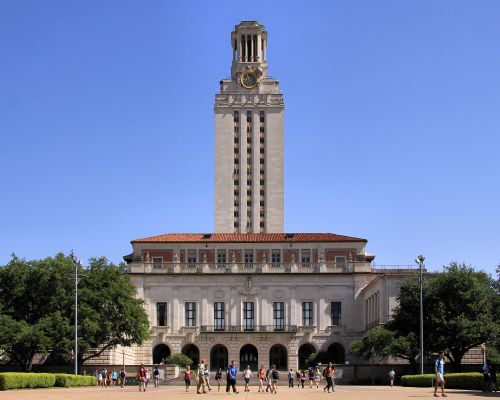 The main building of the University of Texas at Austin in Austin, Texas, in 2014. Photo by Larry D. Moore, CC BY-SA 4.0, via Wikimedia Commons.

A federal judge recently ruled that an Equal Pay Act claim filed against the University of Texas at Austin by a female law professor is allowed to go forward.

The lawsuit, brought by Linda Mullenix, alleges some male faculty members earn significantly more than she. Filed in the U.S. District Court for the Western District of Texas, the lawsuit also claims the men in question have not been law professors as long as Mullenix, have fewer publications and similar student evaluations. Mullenix teaches civil procedure, as do some of the men, according to her action.

While the court allowed her Equal Pay Act claim to go forward, the order, published June 10, granted a defense motion for summary judgment on Mullenix’s Title VII claim but denied her request to file an amended complaint. Previously, a federal magistrate recommended granting a defense summary judgment motion on both claims but denied Mullenix’s motion to file an amended complaint.

“We are very pleased that the district court judge rejected the magistrate judge’s recommendation to dismiss the case entirely and correctly found that there were fact issues for a jury to determine regarding the EPA claim. While we are disappointed that the district court dismissed the Title VII claim and refused to allow us to amend our complaint despite Defendant being allowed to amend its answer, we are still discussing our options regarding appealing,” Colin Walsh, Mullenix’s lawyer, told the ABA Journal in an email.

Ward Farnsworth, the law school dean of UT Austin, did not respond to an ABA Journal interview request.

The June 10 order was written by U.S. Senior District Court Judge David Alan Ezra. It notes that the law school’s budget committee and dean make pay decisions, and in 2018 the categories relied on for decision-making “varied by professor.”

According to the order, in 2018, minimal notes were provided by the committee.

Also, the order cites deposition testimony from Lynn Baker, a law professor who chaired the budget committee that year. Baker indicated she told the committee about an “allegedly unprofessional exchange” between Mullenix and a junior faculty member at another institution, according to the order. Based on the alleged exchange, in addition to an assertion that Mullenix lacked “scholarly publications,” Baker said she was comfortable giving Mullenix a below-baseline rating, the order states.

Baker was unable to say when the allegedly unprofessional behavior occurred, according to the order, which notes that university guidelines require the committee to review faculty performance during the last calendar year. It’s possible, the court wrote, that the alleged behavior may have occurred in a different year.

“For example, Professor Baker testified that [faculty investment incentive] raises were given based on performance over a ‘broader term’ than annual raise decisions and that the raises were awarded to people ‘viewed as important and productive and at risk for retention,’” the order states.

It’s reasonable to infer the committee based its votes for that on reasons other than sex, the court wrote, but the defense “does not get the benefit of such an inference” during summary judgment.

Baker also did not respond to an ABA Journal interview request.