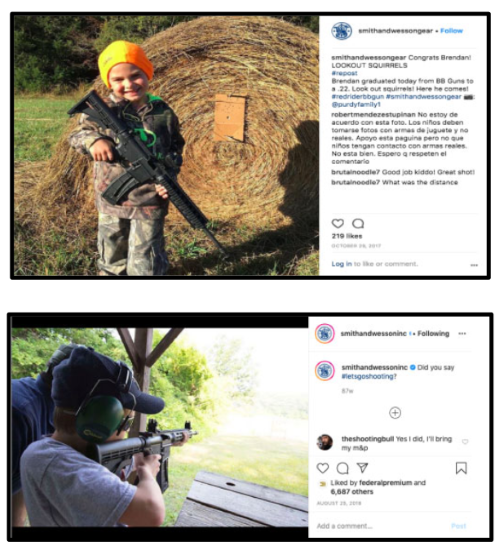 "To increase its profits, Smith & Wesson aims to hook young shooters at an early age, so they can become consumers later in life," according to a lawsuit.

The suits allege that Smith & Wesson violated Illinois consumer law through its deceptive marketing practices for its M&P 15 assault rifle, which was used by the gunman who killed seven people and injured 48 others during the parade, according to press releases here and here.

“Smith & Wesson knowingly sought to place its weapons in the hands of disturbed young men by targeting and exploiting the risk-seeking—and often troubling—desires of these consumers,” says one of the lawsuits. “The shooter and other would-be mass shooters are highly susceptible to the disturbing promotional messages from Smith & Wesson, which foreseeably feed the desires of these young men to act out their militaristic fantasies on a civilian population.”

The lawsuit says Smith & Wesson misleadingly implies that its rifles are used or endorsed by the U.S. military, partly because of the weapon line’s name “M&P,” which stands for “Military & Police.”

The lawsuit follows the playbook of litigation against gun-maker Remington Arms, which made the semiautomatic rifle used in the 2012 shooting at the Sandy Hook Elementary School in Connecticut. The plaintiffs had contended that a 2005 federal law, the Protection of Lawful Commerce in Arms Act, did not protect Remington Arms from liability because its marketing violated Connecticut consumer law. That case settled for $73 million in February.

Also named as defendants are Crimo and his father, who sponsored his son’s Firearm Owners Identification card application when the youth was 19 years old. When he was 18, Crimo had attempted suicide with a machete, the lawsuit says. Police were called to Crimo’s home months later for his alleged threats against a family member.

Other causes of action against some or all the defendants in the lawsuits include negligence, aiding and abetting, assault and battery, and infliction of emotional distress.

Among the plaintiffs in the lawsuits are the Keely Roberts and Jason Roberts, whose 8-year-old boy was paralyzed by a gunshot.

Besides Romanucci & Blandin, law firms involved in one set of lawsuits are Everytown Law and Paul, Weiss, Rifkind, Wharton & Garrison. Additional law firms working on the cases were introduced at the press conference. Another lawsuit was filed by Edelson, Dentons and the Brady Center to Prevent Gun Violence.

Among the publications covering the lawsuits are the Chicago Tribune, Law.com and the Chicago Sun-Times.

The Chicago Tribune spoke with a lawyer for Crimo’s family, George Gomez, who said Crimo’s father followed the law when he sponsored his son’s gun permit application, and he did nothing wrong.