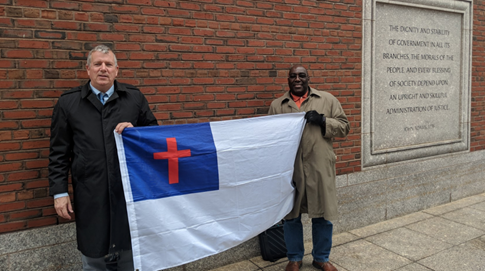 The city of Boston violated the First Amendment rights of a Christian group when it refused to allow it to fly its flag outside the city hall, the U.S. Supreme Court ruled Monday.

Boston had opened the flagpole for private groups to express their views, and the city violated the Christian group’s First Amendment free speech rights by turning down the flag request based on viewpoint.

Justice Stephen Breyer wrote the May 2 opinion for the high court.

Although many of the flags raised at the city hall were those of other countries, some were associated with other kinds of groups or causes, Breyer said. There were flags for Pride Week, emergency medical service workers and a community bank, Breyer said. From 2005 to 2017, Boston approved about 50 unique flags, which were raised at 284 ceremonies.

There is no record of any request being turned down before a group called Camp Constitution sought to raise its Christian flag featuring a red cross.

The flags were raised on a pole that usually carried the city of Boston’s flag.

At issue was whether Boston’s flagpole communicated governmental messages or whether the city opened the flagpole for citizens to express their views.

“If the former, Boston is free to choose the flags it flies without the constraints of the First Amendment’s free speech clause,” Breyer wrote. “If the latter, the free speech clause prevents Boston from refusing a flag based on its viewpoint.”

In this case, the raising and flying of private groups’ flags was not a form of government speech, Breyer said.

Breyer said the “most salient” factor in the case is the extent to which Boston actively controlled flag raisings by groups and shaped the messages the flags sent. 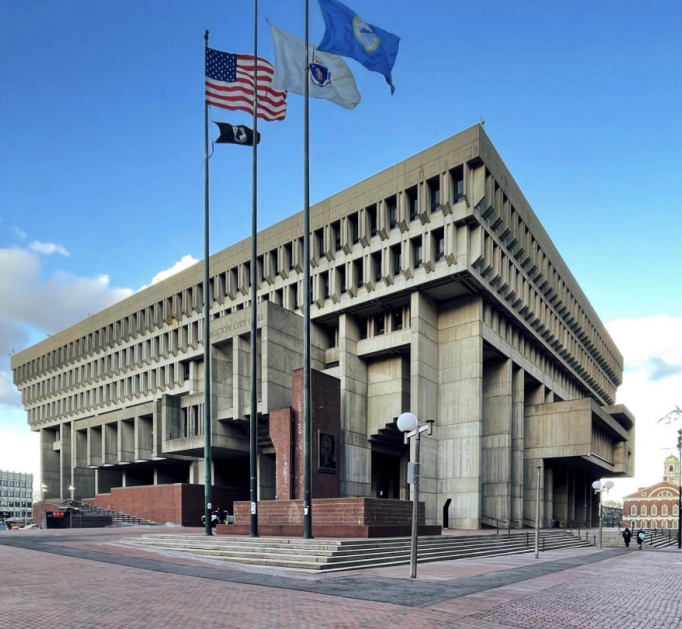 The flagpoles outside Boston City Hall fly the American flag, the Commonwealth of Massachusetts flag and the city flag side by side. Photo from the Supreme Court’s May 2 opinion.

Breyer noted that Boston had refused to fly the religious flag because of concerns that it could violate the establishment clause.

“Under our precedents, and in view of our government-speech holding here, that refusal discriminated based on religious viewpoint and violated the free speech clause,” Breyer wrote.

In a concurrence, Kavanaugh wrote that the dispute arose only because of Boston’s mistaken understanding of the establishment clause.

The justices who concurred in the judgment—Alito, Thomas and Gorsuch—agreed with the result but not Breyer’s analysis.

Gorsuch wrote a separate concurrence in the judgment, joined by Thomas, that blamed the city’s decision on its use of the Lemon test to evaluate its establishment clause concerns. The test has never been formally overruled.

Gorsuch had appeared to criticize Lemon during oral arguments last week, when he asked the lawyer for a praying football coach why the test was wrong and why an alternative test based on coercion is better.

The test is based on the 1971 Supreme Court ruling Lemon v. Kurtzman. The initial test said government action doesn’t violate the establishment clause when it has a significant secular or nonreligious purpose, does not have the primary effect of advancing or inhibiting religion, and doesn’t foster excessive entanglement between government and religion.

The Supreme Court later modified the “effects” test by requiring lower courts to ask whether a “reasonable observer” would consider the government’s challenged action to be an “endorsement” of religion.

“But rather than fix Lemon’s problems, this new gloss compounded them,” wrote Gorsuch in the new case.

“Lemon has long since been exposed as an anomaly and a mistake,” Gorsuch said. “Recognizing Lemon’s flaws, this court has not applied its test for nearly two decades.”

Gorsuch said Boston made a mistake by by seeking “to drag Lemon once more from its grave.”

“This court long ago interred Lemon, and it is past time for local officials and lower courts to let it lie,” Gorsuch wrote.

The case is Shurtleff v. Boston.

ABAJournal.com: “Supreme Court will hear case of Christian group that wanted to fly its flag at Boston City Hall”