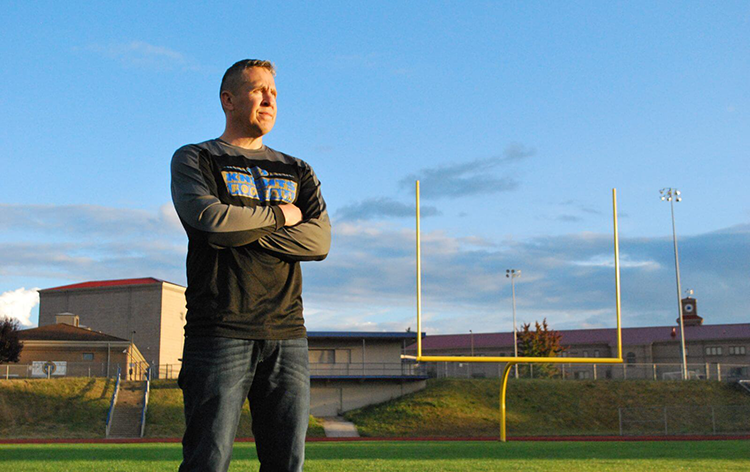 Joseph A. Kennedy of the Bremerton High School in Washington. Kennedy prayed at the 50-yard line after the public high school’s football games. Photo from the First Liberty Institute.

The U.S. Supreme Court ruled 6-3 Monday that a football coach had the right to pray on the field after high school football games under the free speech and free exercise clauses of the First Amendment.

Gorsuch said the school district’s fear of violating the establishment clause didn’t require it “to single out private religious speech for special disfavor.

“The Constitution and the best of our traditions counsel mutual respect and tolerance, not censorship and suppression, for religious and nonreligious views alike,” Gorsuch wrote.

The majority also said it was abandoning the Lemon test and its “endorsement test offshoot” to evaluate establishment clause questions.

The coach had defied the public school’s orders to stop praying with students at the 50-yard line after games. The school put Kennedy on administrative leave and did not renew his contract the next season.

The Lemon test is derived from the 1971 Supreme Court ruling Lemon v. Kurtzman. The test initially said government action doesn’t violate the establishment clause when it has a significant secular or nonreligious purpose, does not have the primary effect of advancing or inhibiting religion, and doesn’t foster excessive entanglement between government and religion.

Some courts have used an endorsement analysis, based on a 1984 concurrence by then-Justice Sandra Day O’Connor. She argued that the purpose prong of the test asks whether the government purpose is to endorse or disapprove of religion.

The Supreme Court majority rejected both tests in its new decision. The court said the tests have long since been abandoned because of their shortcomings.

Gorsuch also said the Supreme Court has made plain that there is no automatic establishment clause violation when a public school or other government entity fails to censor private religious speech.

Kennedy’s prayers were private, rather than government, speech, Gorsuch said. Kennedy wasn’t speaking pursuant to an official government policy or to convey a government-created message, the opinion said. He wasn’t instructing players, discussing strategy or engaging in any other speech that the district paid him to produce as a coach.

“What matters is whether Mr. Kennedy offered his prayers while acting within the scope of his duties as a coach,” Gorsuch wrote. “And taken together, both the substance of Mr. Kennedy’s speech and the circumstances surrounding it point to the conclusion that he did not.”

Gorsuch said the Supreme Court has replaced Lemon and its endorsement test with instructions that the establishment clause be evaluated in light of historical practice and understanding.

Gorsuch noted that the establishment, free exercise and free speech clauses are often referred to as separate units. But all three clauses appear in the same sentence of the First Amendment, he said.

“A natural reading of that sentence would seem to suggest the clauses have ‘complementary’ purposes, not warring ones,” Gorsuch wrote.

“In the end, the district’s case hinges on the need to generate conflict between an individual’s rights under the free exercise and free speech clauses and its own establishment clause duties—and then develop some explanation why one of these clauses in the First Amendment should ‘trum[p]’ the other two,” Gorsuch wrote.

But the district can’t even show that the clauses are at odds, Gorsuch said.

“There is only the ‘mere shadow’ of a conflict, a false choice premised on a misconstruction of the establishment clause. … And in no world may a government entity’s concerns about phantom constitutional violations justify actual violations of an individual’s First Amendment rights,” he wrote.

“This case is about whether a public school must permit a school official to kneel, bow his head and say a prayer at the center of a school event,” Sotomayor wrote. “The Constitution does not authorize, let alone require, public schools to embrace this conduct.”

Sotomayor said the majority acknowledged that the establishment clause prevents the government from coercing religious participation, but it “applies a nearly toothless version of the coercion analysis.”

Hat tip to SCOTUSblog, which had early coverage of the opinion.