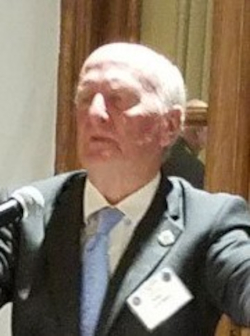 U.S. District Judge Fred Biery of the Western District of Texas in San Antonio. Photo by the FBI San Antonio, via Wikimedia Commons.

Updated: The 5th U.S. Circuit Court of Appeals at New Orleans has reversed a federal judge’s refusal to suppress gun evidence a second time after he declared that he doesn’t read 5th Circuit opinions and stuck to his initial decision.

The 5th Circuit didn’t name the judge, but the PACER docket sheet indicated that he is U.S. District Judge Fred Biery of the Western District of Texas in San Antonio.

In its June 10 unpublished per curiam opinion, the 5th Circuit ruled for Raymond McKinney, who was charged with illegal possession of a firearm after a felony conviction. McKinney had sought to suppress evidence of the gun found when police conducted a pat-down search.

Biery had at first denied the suppression motion without a hearing, and McKinney entered a conditional guilty plea in which he reserved the right to appeal the suppression decision. In the first appeal, the 5th Circuit reversed, holding that the evidence didn’t show that officers had reasonable suspicion to detain McKinney for questioning.

According to a 5th Circuit footnote, Biery scheduled the hearing and stated: “I follow Judge [Lucius Desha] Bunton’s rule about 5th Circuit opinions: ‘They can reverse me if they want to, but they can’t make me read it,’ which I’m glad you all have read it. But I also—if my recollection is correct, none of those fine judges have ever tried a case or dealt with what we deal with on the street. But, anyway, what do I know?”

After an evidentiary hearing, Biery again denied the motion to suppress.

In its latest opinion, the 5th Circuit said the government had not offered any evidence in the suppression hearing “to assuage our earlier concern that the officers stopped McKinney based on nothing more than a hunch. Nonetheless, the district court entered an order denying McKinney’s motion to suppress that mirrored almost exactly its earlier order that we found wanting.”

Biery told the ABA Journal that his remarks were no more than “courtroom banter.”

“I read the opinions,” Biery says.

He says his remarks were “a Judge Bunton-ism that gets passed down through the years.”