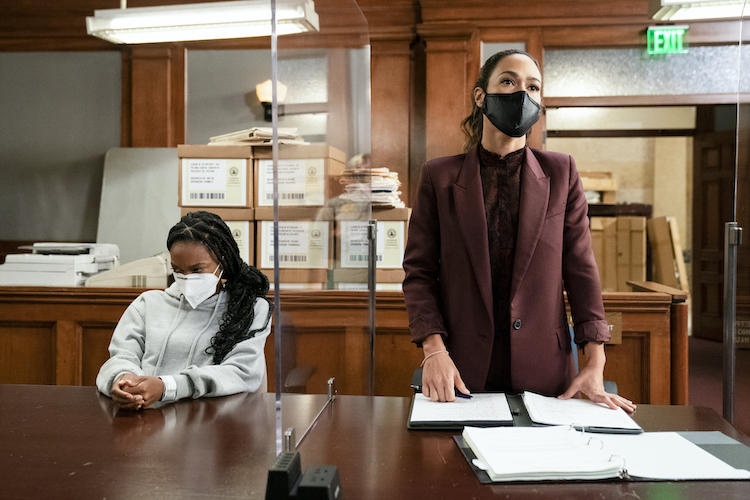 When the pandemic first hit, I felt about as comfortable as could be expected. I have always been one who neurotically washed his hands, so hand-washing has never been an issue for me. I’m not nearly as social as I was in my youth—and my mother, father and sister live out of state—so I don’t spend time with too many people other than my wife and son. Like many other folks, I imagine, the strangest thing to me was not going out to dinner.

And the masks. Everyone in masks has definitely been an adjustment.

Don’t get me wrong: I agree that everyone should wear a mask to protect himself or herself and others. I’m all for mask mandates as well. But constantly seeing every face around me covered is difficult. Every time I walk into a crowded area with a large number of masked individuals, I have to remind myself this isn’t some Orwellian dimension; this is reality. And no television drama I’ve seen recently portrays that reality in the workplace better than the CBS series All Rise.

The series’ second season started in November. All Rise follows the career of first-term Judge Lola Carmichael, who presides over a docket in Los Angeles. I’m not sure what her caseload normally consists of, but the episode I reviewed dealt with a criminal matter, and I learned that she practiced as a prosecutor prior to taking the bench. The show concluded its first season in early May—when the United States was embroiled in the still-continuing argument for and against mandated masks—with an episode focused on the pandemic and the modifications it has forced upon our society.

Season Two seems to have picked up right where the first season left off in that regard. From the opening scene of the first episode, I was immediately surprised by the number of masks, PPE and consistent protocols in the courtrooms. Again, this is not because I have any issue with them—I want more masks and consistent protocols put into place. I was surprised because (1) I haven’t seen a show portray that level of protection and responsibility; and (2) I haven’t seen a court I’ve practiced in provide it, either. 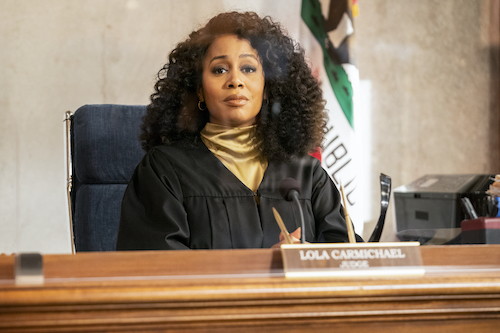 Consistency in the courts

Here in Oklahoma, there is no consistency with regard to courthouse pandemic-protection protocols. The lack of consistency makes it very difficult to operate a statewide practice because rules and regulations differ from county to county.

Perhaps that’s why the precautions portrayed in the All Rise courthouse were so jaw-dropping. Judge Carmichael wears a mask and a face shield. The show utilizes what appear to be acrylic glass sneeze guards and shields to protect the judge and her staff. Acrylic glass guards separate counsel tables, and further guards separate the attorneys from their clients at the individual tables.

Even in the most responsible courthouses I’ve practiced in over the last year, the most I’ve seen with regard to COVID-19 protections is the acrylic glass protecting the judges and their staffs. Inexplicably, however, there is no such protection for the attorneys and their clients.

I’ve been in rural courthouses where judges have extended a hand and informed me, “We shake hands around here.” At least one of those courthouses has had to close due to a COVID-19 outbreak.

Now, I don’t know if the California courthouses in All Rise’s cinematic world are consistent in their pandemic protections. I like to think so based on the effort the production team put into that facet. But that’s likely just me, enviously dreaming of a better scenario, a legal environment where attorneys and the public can count on consistent protection. Why? Because there are no current uniform mandates ordering Oklahoma judges to prescribe specific precautionary measures.

Our state supreme court and court of criminal appeals have issued various joint emergency orders regarding the pandemic. The first was issued March 16; the second on March 27; the third on April 29; and the fourth and most recent order was issued Nov. 23. While the joint emergency orders initially took the necessary and drastic steps of canceling jury trial dockets across the entire state for months at a time, the most recent order merely vests the 77 individual county district courts and their corresponding county officials with the discretion on how best to proceed. There are recommendations, but there is no consistency as to the final say.

In fact, two of the state supreme court justices dissented to the fourth joint emergency order on that exact basis. According to those justices, “[The Oklahoma Supreme Court has] the duty and responsibility to ensure consistent policies are executed by all courts rather than leaving these decisions to the discretion of individual judges of the district courts throughout the state of Oklahoma.” I agree wholeheartedly and wish that were the case for the health and safety of everyone. 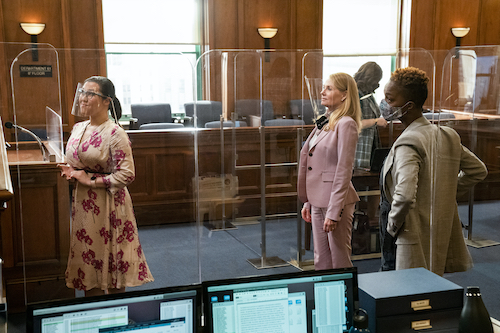 Inmate health during a pandemic

Outside of the health and safety issues, the ever-growing docketing issues, the constantly continued trials due to infected parties and the ever-present “unknown” consistently hanging over our heads, attorneys (and criminal defense attorneys like me, specifically) also have had to address a new and continually evolving crisis: For those who are held in county jails pending bond and those who are sent to prison after a conviction, the reality of the pandemic hits full force.

All Rise touches on the difficulty defendants and their counsel face while fighting a criminal case from a jail cell during a pandemic. But theirs is a much easier world, comparatively. The attorneys depicted in the show are lucky enough to videoconference with their clients. In all of the jails I’ve been to, you’re either meeting in person or yelling at each other through a no-contact barrier. So the problem is portrayed, but it’s not quite the same.

Ultimately, the show puts forth a valiant effort to capture the struggle inmates and their counsel encounter trying to stay healthy and accomplish their goals inside an incubator. Nevertheless, All Rise doesn’t reflect the difficulties most of us have likely experienced. Many of our jails and prisons have a challenging time containing the virus. Prison outbreak numbers have reached nearly 25% in some Oklahoma facilities. The county jails haven’t been spared, either.

The topic of potential infection comes up often with clients when a prison sentence looks likely. Moreover, I get plenty of calls from families recounting the horrendous and unsafe environment their loved ones relay to them once inside the cage. Honestly, I have no good answer or advice, and I hate it. The overall infection numbers fluctuate, but you can’t show a family a graph when explaining the pros and cons of their loved one’s safety in light of a silent killer. There is a human element to consider, and it’s essential for everyone to acknowledge it.

Thankfully, All Rise does shine a spotlight on that issue, among others. If the public and the courts don’t care about our inmates and attorneys’ health and safety, at least they can’t claim ignorance as a plausible defense.