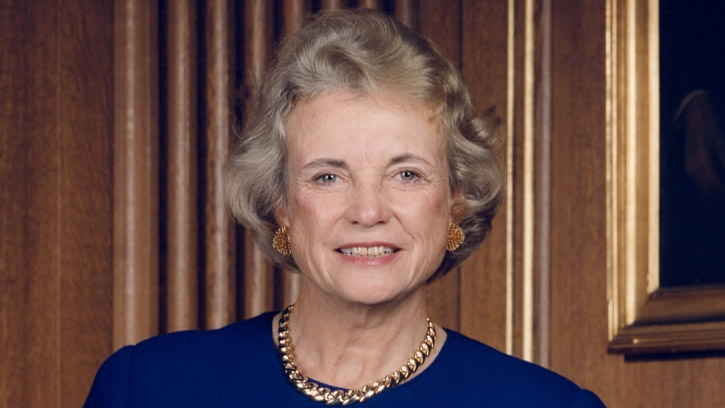 Not long ago, PBS reached out to me regarding a new installment in their “American Experience” series, entitled Sandra Day O’Connor: The First. I was immediately interested; however, I had already started work on two other columns that would take precedent. Be that as it may, I hate to pass up an invitation from a respectable distributor. Consequently, I wanted to take the time to review the program, as I feel later is better than never.

From cattle ranch to college

The audience is treated to various stories illustrating her life before assuming the bench. Nonetheless, these instances of O’Connor’s rugged upbringing were tempered by the fact that her parents were “reluctant ranchers.” Her mother was a college graduate from El Paso who “greeted each morning on [the ranch] wearing stockings and perfume.” Her father was a champion high-school athlete bound for Stanford when he was “drafted” to rescue the family ranch. As O’Connor’s son notes, “[O’Connor’s father] missed out on the education he dreamed of … mom was born right into that picture. All of his dreams, I think, had to be delivered through her. She was the vehicle.”

As such, O’Connor excelled academically, so much so she skipped two grades and enrolled at Stanford when she was just 16. She continued to excel through her undergraduate education, and her high marks laid the foundation for attending Stanford’s law school.

Those lessons from the farm, and the independence and determination instilled in her, took O’Connor to great academic heights. But once she graduated law school, she met the reality so many other women faced in that era: Law firms didn’t respect female graduates, and their employment opportunities were close to nonexistent. As a viewer, this portion of the documentary was very reminiscent of other female Supreme Court justices’ experiences (more on that later).

Subsequently, O’Connor made her way to Arizona with her husband, hoping the job field would be more fertile. It wasn’t. She hung her shingle as a solo practitioner, and when that became too daunting after the birth of her third son, she retreated somewhat from the practice of law and found various ways to stay busy while her spouse made a name for himself as a commercial litigator. When he became active in Arizona’s Republican Party, so did she. “In politics, she found an outlet for her ambition.”

Eventually, O’Connor returned to law in 1965 as Arizona’s assistant attorney general. Within four years of taking that position, a Republican seat in the Arizona Senate was vacated midterm. O’Connor was ultimately appointed through her party connections, and she continued to hold the seat through the next two elections, just as the woman’s feminist movement began to take flight. In 1972, her party made O’Connor the first female state-party majority leader in United States history.

Even though she didn’t outwardly support the Equal Rights Amendment (the “ERA”—discussed more here), she made a list of all Arizona laws that discriminated against women and set out to change them.

When President Richard M. Nixon appointed her friend and former classmate William Rehnquist to the U.S. Supreme Court, O’Connor realized a potential avenue for returning to the legal field while still escaping the sexist dynamics of law firm practice. With that goal in mind, she ran for a Maricopa County Superior Court position and won with 70% of the vote. By 1979, she was elevated to the Arizona Court of Appeals.

During this same time, President Ronald Reagan found himself in a precarious political position: After running on a platform opposing the ERA, abortion and the feminist agenda, Reagan had isolated many female voters. Accordingly, he promised to fill the first Supreme Court vacancy with the most qualified woman he could find.

That promise was fulfilled once he nominated then-Judge O’Connor. Understandably, this momentous development resulted in the first confirmation proceedings publicly broadcast from gavel to gavel. The country tuned in, and while many applauded the progressive position, others were adamantly opposed.

Many on the right believed O’Connor sympathized too much with the feminist agenda due to her work in the Arizona Senate. One such group was the new “Christian Conservatives,” who collectively complained against her supposed stance on the issue of abortion. Nevertheless, O’Connor’s consistent reliance on judicial independence, and her constant explanation that her personal views—whatever they may be—had no place influencing her judicial integrity, secured her future. She was confirmed 99-0.

During her earliest days on the high court, Justice O’Connor seemed in line with the cause of halting the Supreme Court’s recent liberal-led trends. She initially allied with Justices Warren Burger and Rehnquist, the court’s leading conservatives. She quickly emerged as an advocate of Reagan’s “New Federalism.” Once Burger retired and Antonin Scalia was appointed, the two clashed on certain issues despite similar conservative perspectives. The documentary discusses how their incompatibility may have catalyzed O’Connor’s transition from the conservative right to the court’s center.

Specifically regarding the abortion issue which continued to present itself before the court, O’Connor became the pivotal swing vote in the face of subtle directives from then-President George Bush. Moving forward, her fifth vote continued to seal the court’s decisions for years. This was demonstrated in various opinions, including her decisive ruling in Gore v. Bush (2000). Leading up to retirement, O’Connor’s transition closer to the left became even more apparent as the Republican Party she knew began to change before her eyes.

Even though the documentary is well put together, it still leaves a bit to be desired. As other reviews have noted, Sandra Day O’Connor: The First doesn’t present much that hasn’t already been discussed and documented. There are recitations of excerpts from her diary, which provide some humanity and context behind the figure. Still, as you can likely tell from my review, most of what the documentary offers can easily be found in one of O’Connor’s biographies.

This documentary could have presented a very apt opportunity to discuss the issues regarding just how politicized abortion continues to be in light of the Supreme Court’s current makeup. Perhaps it wasn’t feasible to intertwine the latest abortion-related conflicts into the documentary’s production schedule; still, it feels like Sandra Day O’Connor: The First failed to benefit from the correlation. For as much time as the documentary spends on the topic, the connection would have been worthwhile.

Furthermore, the documentary made me wonder: “Where is the Justice O’Connor movie?” After all, O’Connor welcomed Justice Ruth Bader Ginsburg to the court, and Ginsburg has her own feature film. Still, the slight isn’t anything new. As the documentary explains, it wasn’t even until Justice Ginsburg arrived that a ladies’ room was finally built into the judges’ chambers. Maybe it’s simply a product of recency bias, but I’m not so sure.

Still, O’Connor warrants at least the same respect in pop culture. She and Ginsburg were allies. They normalized having women on the nation’s highest court. Moreover, comments throughout the documentary discuss how O’Connor’s ascendance finally gave mothers tangible proof to show their daughters how much they could achieve.

She was the original pioneer. She was the first. Hopefully, one day she’ll get the recognition she deserves.

Updated on Oct. 8 to fix a reference to the end of O’Connor’s time on the Supreme Court.