'Suits' and the difference between federal and state court 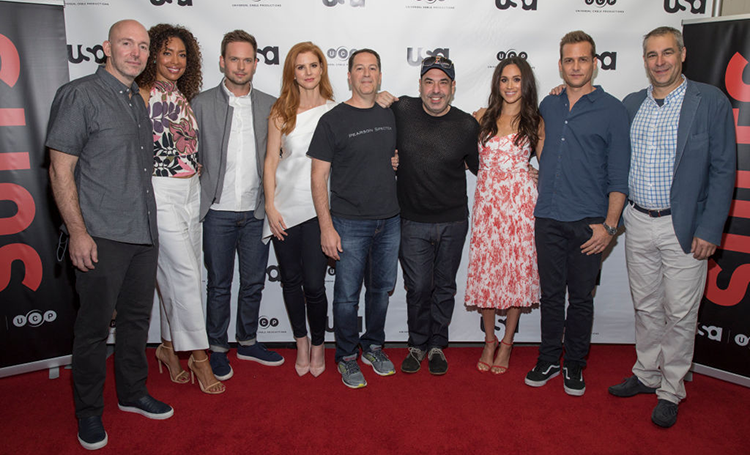 The cast of Suits on a promotional tour before the seventh season. (Photo by Rick Kern/USA Network/NBCU Photo Bank/NBCUniversal via Getty Images)

Most of the law practice occurs while the federal prosecutor sits alone in a room with the suspects. Despite the other outlandish issues in the episode, I found this scenario the least believable.

My son has a new nanny to help pick him up from school and watch him in the afternoon on the days his preschool doesn’t meet. While recently discussing my schedule in regard to blocking a bit of time away to write my column, I explained to her the general gist of my ABA Journal topics and threw out a few movie and television titles I’ve analyzed.

She mentioned that she enjoys the show Suits. I assured her she was not the first person to pitch the show as a basis for this feature. Seeing how I didn’t have any other option in mind, I figured it was high time I gave Suits a try.

A bit of background

The series was initially released on USA Network on June 23, 2011. It ran for nine seasons, with its series finale airing Sept. 25, 2019. It is now able to be watched on the Peacock streaming service. Suits is an ensemble piece with many players, but for the intents and purposes of this column, we’ll focus on high-profile attorney Harvey Specter (Gabriel Macht) and his “associate” Mike Ross (Patrick J. Adams).

Although I utilized the trusty services of episode.ninja, per custom, I took a somewhat different approach than usual. Typically, I pick the episode with the highest user rating and run with that; but this time, I chose the second-highest-rated offering. I had my reasons: First and foremost, the highest-rated episode is the last entry in the entire series, and I had a few reservations about starting with the ending. Moreover, the second-place entry caught my attention when I read, “Harvey and Mike find themselves at odds with a tenacious U.S. attorney.”

To anyone upset with this deviation from my standard practice, I apologize. Nevertheless, I don’t make the rules—I just think them up and write them down.

The episode in question (season 3, episode 16) begins with a recap, but I was still inevitably lost. My background research informed me that Suits revolves around the attorneys’ interpersonal relationships, specifically those of Specter and Ross. In the pilot episode, Specter hires Ross as an associate with his Manhattan firm even though Ross never finished college, let alone graduated from law school. What Ross does have, however, is an undeniable understanding of the law (due to his photographic memory) and a penchant for creative application of the same.

With that context, I could at least piece together the episode’s discussion regarding Ross “becoming” a lawyer to some extent. Apparently, in the previous installment, he had someone hack into the bar website and add his credentials to the roll of attorneys. A little wild? Perhaps. But I’m sure it makes good television for the uninitiated.

Toward the beginning of the episode in question, Ross is approached by agents working with the local U.S. attorney’s office. They ask Ross to go with them, and he complies. It seems the U.S. attorney has taken issue with a recent settlement Ross negotiated with another attorney, and he’s out to take down a “dirty lawyer.”

Agents bring Ross in for questioning, and the prodigy oddly fails to invoke his Fifth and Sixth Amendment rights. For someone cast as a legal genius, it seemed troublesome for him to bypass such prominent shields in favor of speaking freely with a prosecutor who has an ax to grind. Nevertheless, Specter quickly gets wind of the situation and shows up to save the day (for the time being).

Shortly thereafter, Ross is formally arrested on suspicion of conspiring against the United States. He and his alleged co-conspirator are taken back to the U.S. attorney’s office, where they are segregated and put in holding cells. This time, Ross invokes his right to counsel, but the prosecutor brushes the request aside and simply relies on the Patriot Act.

Specter and his firm ultimately step in to represent Ross and the other attorney against the prosecution’s arguably underhanded interrogation tactics. Consequently, there are no courtroom scenes, and most of the law practice occurs while the prosecutor sits alone in a room with the suspects. Despite the other outlandish issues in the episode, I found this scenario the least believable.

After all, every time I’ve ever met an assistant U.S. attorney with a client, there’s also been at least one federal agent present. The condition here is “with a client,” so I couldn’t tell you how U.S. attorneys handle themselves when alone with suspects. I’ve only practiced in Oklahoma federal courts, so I can’t speak to any other jurisdiction. Still, my gut tells me that situation rarely plays out, if at all.

And why is that? Because the federal government allots a ridiculous amount of resources to its prosecuting arm, and I doubt many U.S. attorneys would venture jeopardizing their extremely high conviction rate by giving off even the appearance of impropriety regarding the observance of a suspect’s rights.

Moreover, in my experience, suspects in federal court rarely find their way into questioning unless and until agents have put together a well-buttressed and viable case for prosecution. It’s much different from the small-town “Barney Fife” investigations we often see on the state level. In those local law enforcement situations, the prosecution and law enforcement may be more likely to swing first and ask questions later. The feds usually have a far more calculated plan of attack in comparison.

That plan plays out in the way they initiate their formal charges. Here in Oklahoma, state court charges almost always begin with an arrest warrant followed by, or simultaneously with, a charging information filed in the district court. Very rarely do we see criminal charges stem from a grand jury indictment on the state level.

In federal court, however, we usually see charges arise in one of three ways. The U.S. attorney’s office, in conjunction with law enforcement, will often file a criminal complaint, which then leads to a formal charge and arrest warrant. A criminal case can also be initiated by indictment after presentation to a grand jury. Still, many individuals contact my office after receiving what is referred to as a “target letter.” This amounts to the government sending out a notice that they intend to indict an individual unless they (and their counsel, if they so choose) meet with the prosecution and the respective agent(s).

To be fair, it is typical for suspects/defendants to meet with the prosecuting U.S. attorney—either for a Rule 11 debriefing if they plan to cooperate in any form or fashion or for a proffer and discussion—when they receive a target letter.

As I mentioned, I’ve never seen the prosecution in one of these meetings without at least one of the federal agents involved in the investigation. Consequently, it was hard for me to give too much credit to the “interrogation” scenes portrayed in this Suits episode.

Nevertheless, the series works from a fun and unique genesis, and I’ve always been a fan of the antihero aesthetic. Ultimately, Suits has some allure as a flashy, stylish legal drama for those unfamiliar with the legal system’s inner workings in actual practice. And while there are engaging interplays regarding the potential complexities of a large firm, it seems a bit overdone.

Still, that’s to be expected: We’re dealing with a plot that circles around a fraudster who defrauded his way, at least initially, into “becoming” a licensed attorney. I’ll admit—to my disdain—that every legal drama doesn’t need to primarily be procedural. There is some room for fun, so long as it’s within the realm of possibility.