Ari Kaplan recently spoke with Dan Binstock, a legal recruiter and co-owner of Garrison & Sisson, a leading attorney search firm. Binstock is also the creator of the Virtual Piano Party.

Ari Kaplan: Tell us about your background and the genesis of Garrison & Sisson.

Dan Binstock: In college, I studied music and quickly realized that the fact that I didn’t read music and only played by ear was not an ideal background for a career in classical music, so I switched to psychology. After graduating, I went to law school and became an IP attorney at Finnegan & Henderson (now Finnegan, Henderson, Farabow, Garrett & Dunner), for about four-and-a-half years. I love talking to people more than billing my time and thought about going back to school to become a therapist, who would focus on working with lawyers, but didn’t want to obtain another degree, so I became a legal recruiter because I love the idea of helping people move from one job to another. I started off with a national search firm in 2004, and in 2010, I moved to Garrison & Sisson as a partner.

Ari Kaplan: How would you characterize the current legal job market?

Dan Binstock: It’s actually very active. When the pandemic started, we were all very concerned about what would happen, and a number of firms put their hiring on a hold, particularly at the associate level. Now, it is busier than it has been in several years, especially for corporate lawyers. I focus on partner and practice group movement, which is very active because the delays during the pandemic increased demand, and it is much easier for partners to interview remote, since they don’t have to worry about leaving the office or flying to different parts of the country for meetings. Zoom is making the interview process quicker, streamlined and more fluid. Also, the pandemic highlighted the character of certain firms, which made some more committed to staying and motivated others to leave.

Ari Kaplan: How do you see the market changing as we emerge from the pandemic? 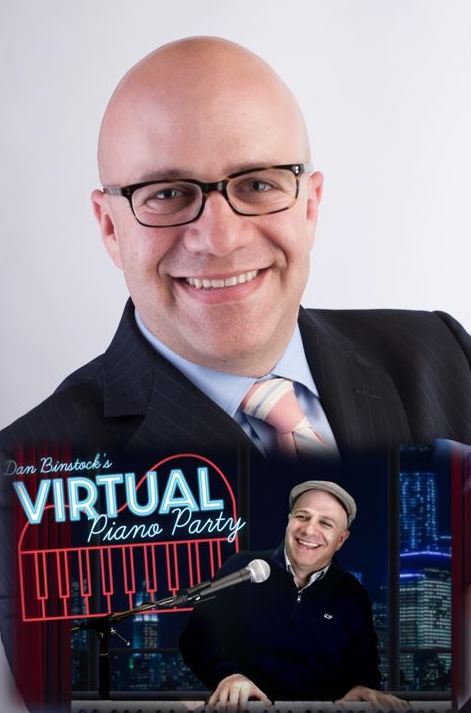 Dan Binstock, a legal recruiter and co-owner of Garrison & Sisson.

Dan Binstock: As long as the economy stays strong, the legal job market will remain active, especially if we see more enforcement actions from the Biden administration. There is no reason to expect a slowdown.

Ari Kaplan: You are the creator and host of the Virtual Piano Party, and, in fact, you led a fantastic celebration of the 300th episode of the Virtual Lunch. How did this initiative get started?

Dan Binstock: It happened by accident. It was April of 2020, and we were all really in the depths of the beginning of the pandemic at home. On Facebook Live, I just turned on my iPad one day and offered to play songs by request, and it went viral, with over 1000 comments. I started getting requests to do more and began performing every two weeks. Then, in the fall of 2020, Zoom updated its software so that you could perform music on the platform without a delay, so I began advertising on Facebook for the holidays. I thought it would appeal to one or two people, but then I was booked six times in two days, and there was a massive demand because people were looking for fun ways to engage with their friends and family. I started getting booked for all types of events, and it just became the Virtual Piano Party.

Ari Kaplan: Who are your clients?

Dan Binstock: In the beginning, they were families, friends having happy hours, birthday parties. Much of it was more personal, but as it has grown, it has become more corporate, and I have been working with a lot of law firms, including for their summer associate programs. In fact, 75% of my bookings lately have been for law firms, many of which are actually my clients during the day for recruiting.

Ari Kaplan: How have you generated such positive attention?

Dan Binstock: People have sought out entertainment during the pandemic that is unique and interactive. While a lot of musicians have been giving online concerts, I have focused on engaging attendees. The Virtual Piano Party brings people together, and I also donate a portion of each booking to charity.

Ari Kaplan: What is the secret to engaging attendees on your Zoom-based events?

Dan Binstock: I’d like to think that my events feel very organic, but behind the scenes, everything I do is intended to promote interaction. For example, I ask a lot of questions and never like to play for more than two minutes without engaging the audience. I’ll ask participants to raise their hands if they like a particular type of music or to stand up for one reason or another. We start off at a low level of engagement and increase gradually—increase it to the point where people literally jump up and down on their sofas. I find that the most important element is to avoid making it a one way performance because you can be the most amazing musician, but if people are bored, it will not be a success.

Ari Kaplan: Where do you see the Virtual Piano Party headed?

Dan Binstock: Even when the pandemic ends and people are regularly going out, I do think that there will be a need for these events because we’re always going to have remote colleagues, hybrid conferences and Zoom. It is probably something that I will always do for fun and for the love of performing, but I love recruiting. While I’m not leaving my day job, the Virtual Piano Party will remain as a way to balance my life and continue to bring fun and joy into people’s homes.