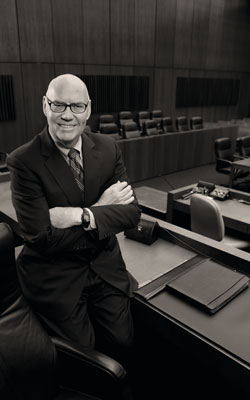 What he’s been up to: While courts across the country struggle to reign in social media-enthused jurors, Chief Judge James F. Holderman has found success curbing disallowed Internet use in the U.S. District Court for the Northern District of Illinois. Holderman credits implementation of the ABA’s Principles for Juries and Jury Trials, which allow jurors to submit written questions and discuss the case together during civil trials.

“Those procedures better engage jurors and recognize jurors’ increasing desire for instant access to information and social discourse,” Holderman says of the principles, which he encourages other judges to adopt.

“Allowing juror questions has the positive effect of keeping jurors from using the Internet to obtain information because it gives them a court-authorized vehicle to obtain an answer, if appropriate, when a question comes to their minds,” he says. Holderman also lets jurors speak to one another in the jury room about the trial as it progresses, provided they agree not to prematurely reach a conclusion. This minimizes jurors’ inclination to communicate with others—in person or via social media—about the case.

Now in its third phase, which includes lawyers, judges and courts from 21 states and Washington, D.C., the project has the potential to move the culture of pretrial discovery in the United States from an approach of asking for everything and giving nothing toward greater cross-party cooperation that contains costs, Holderman says.

“The bulldog mentality is out of date,” Holderman says. “Lawyers need to understand that there’s a time for definitive advocacy and also a time for conciliation and cooperation, so lawyers don’t spend their clients’ resources litigating over things that aren’t going to make any difference in the ultimate outcome of the case.”