Do court bans on electronic devices impede access to justice? 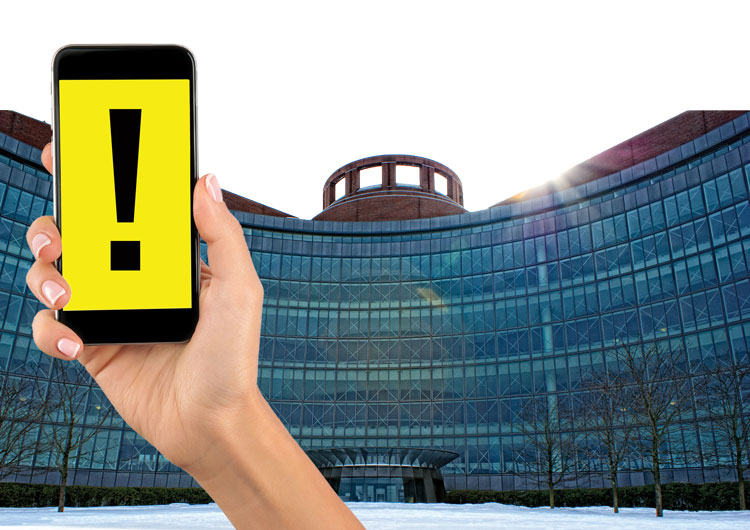 On a daily basis, attorney Jade Brown sees firsthand what happens when people are separated from their phones in court. There was the woman who couldn’t share a photograph on her phone with a judge as evidence in her case. The man who wasn’t able to understand what was being said without using a translation app. The senior who couldn’t reschedule a shuttle ride home when her case was running late. These scenarios all happened because cellphones aren’t allowed in most of the courtrooms in and around Boston.

Brown, who is a fellow in the consumer rights unit with Greater Boston Legal Services, which provides pro bono work on civil matters to low-income individuals, says that often people don’t learn until they arrive at court that they can’t bring in their phones. Frequently, there’s no storage offered, and they panic.

“We’ve seen folks do sometimes crazy things, because they’re like, ‘I’m going to miss my court case and get in a lot of trouble, so I have to figure out what to do with the phone,’ ” Brown says. She’s watched people hide their phones in nooks and crannies around the courthouse and even stuff them—without permission—into the bags of their attorneys. In some cases, convenience stores and other businesses near the courts will store phones for a fee. “That’s one of the better scenarios,” she says.

Across the country, courts of all types have banned cellphones in courtrooms. Some inform litigants of the ban before they show up, others don’t. Some offer lockers for storage, others don’t. Courts have cited different reasons for the bans, ranging from preventing disruption in the courtroom to protecting witnesses who could be photographed and potentially threatened for appearing.

In 2017, the McLean County Law and Justice Center in Bloomington, Illinois, enacted a cellphone ban and placed lockers for court attendees to store their devices. McLean County Sheriff Jon Sandage says the ban is intended as a security measure in response to incidents of witness intimidation, after photos and video of witnesses testifying were posted on social media.

“For law enforcement, the ban has been positive,” Sandage says. “Building employees and attorneys are still allowed to have phones, and the sheriff’s office provides lockers to the public to secure their phone before entering the courthouse.”

While cellphone bans may have justifiable intentions, legal services advocates call them problematic—and not just because they pose an inconvenience.

“It’s a real barrier to access to justice,” says Deborah Silva, executive director of the Massachusetts Appleseed Center for Law & Justice in Boston. Silva points out that these types of bans disproportionately impact litigants who are representing themselves because they can’t share evidence or look up information they might need using their phones.

“The burden of this policy really falls to those who can’t afford to hire an attorney,” Silva says.

In December, the Supreme Court of Virginia released a Model Policy for the Use of Portable Electronic Devices in Courthouses and Courtrooms after examining the issue, offering recommendations to district and circuit courts around the state. The policy seeks to strike a balance between the two major issues: access to justice, and safety and security. Under the model policy, the presiding judge would need to grant permission to allow phones and other electronics in the courtroom; photography, video and audio recording would require permission; and if a ban is in place, lockers should be made available at that courthouse.

As courts across the country grapple with the issue, Silva hopes that they consider underserved populations and make a decision that will deliver justice to all.

“Ideally, in a perfect world we’d just like to see the cellphone bans lifted and have everyone allowed to bring cellphones in,” Silva says. “And if someone does act in a way that’s disruptive or intimidating, deal with that situation other than making up a blanket ban.”

This article was published in the April 2019 ABA Journal magazine with the title "Hold the Phone."