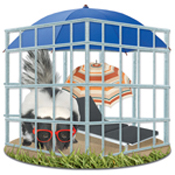 Ryan Turner had every right to raise a stink about a skunk attempting to take up residence in his residence in South Salt Lake, Utah. After it scavenged his groceries and sprayed its universally identifiable scent under his bed, Turner request­ed that the city re­move the malodor­ous marauder.

The city responded by offering to drop off a trap for a $50 deposit, but Turner’s girlfriend declined. It just so happens, though, that the neighboring property is a city-owned lot. Turner talked to employees there, and they agreed to put out a trap on a Friday afternoon in August. The animal was captured that evening.

Over the weekend, Turner is al­leged to have moved the trap from the city lot into his yard, saying he wanted to put the overheated animal in shade until Mon­­day, when it would be retrieved. That’s when the city stepped in.

After an animal control officer reported the trap missing, Turner was cited for criminal trespass; he re­portedly faces fines of more than $600. After a court appearance in November, Turner was scheduled for trial on Jan. 8.

In spite of his legal woes, Turner seems to harbor no ill will toward the striped stinker. “I’d rather be in the situation I’m in now,” he told the Salt Lake Tribune, “than not do anything.”