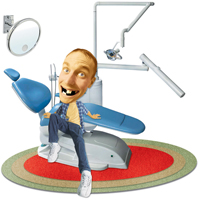 While a visit to the dentist doesn’t rank high on most people’s lists of pleasant diversions, at the very least we expect to leave in better condition than when we arrived. An amalgam of lawsuits filling the dockets indicates that’s not always the case.

Persistent pain, dizziness, nosebleeds and sinus infections plagued Tampa, Fla., resident Donna Delgado for close to a year. Eventually, it was discovered that Delgado, 35, had a dental drill bit lodged in her right maxillary sinus. The implement had been left there after she had two teeth pulled in August 2008. Don’t you hate when that happens?

In a lawsuit filed in January, Delgado seeks to extract unspecified damages from Dr. Ralph Eichstaedt.

And if that’s not enough to make the hairs on the back of your neck stand up, there’s a South Carolina woman who sued a Florence dental clinic after all 16 of her upper teeth were mistakenly removed in 2006. Elizabeth Smith, 25 at the time, was reportedly scheduled to have just three teeth pulled and a partial upper denture installed.

Evidence presented at trial suggested it would take about $80,000 worth of oral surgery and implants to bring Smith to the cusp of good dental health. In August a jury took a bite out of the clinic to the tune of $2 million.

In a case of what might best be described as butter fingers, the family of a Florida man filed a civil lawsuit last June against a dentist who dropped a dental tool down the man’s throat—on two different occasions.

Dr. Wesley Meyers acknowledged dropping a miniature screwdriver down the gullet of Charles Gaal, 89, in October 2006. Gaal subsequently underwent a colonoscopy to retrieve the tool. In May 2007, says the lawsuit filed in Orange County Circuit Court, Gaal returned to Meyers’ dental office for further treatment. During this visit, according to published reports, a second tool, described as a “mini-wrench,” slipped into Gaal’s throat and made its way into his lung, necessitating surgical removal.

The family claims that Gaal’s death about 1½ months later was a result of Meyers’ negligence.

And Illinois Attorney General Lisa Madigan has served legal notice on a man who has been practicing dentistry without a license. The complaint states that Dr. Gerardo Gonzalez (he’s licensed in Mexico) has been the subject of complaints by patients, one of whom said she saw blood on the floor, blood en crusted on dental tools, and Gonzalez using the same gloves for different patients.

To be clear, there’s no intent here to scuff the veneer of dentistry. Many of us have come close to kissing a dentist who squeezed us onto the schedule and relieved us of the throbbing pain of a toothache. It’s the few who don’t give a dry socket about technique or hygiene, or who allow their skills to decay, that are the true gaps in our bridgework.

What’s that? You say you’ll still take your chances on that guy down the block who has a dental chair set up in his garage?