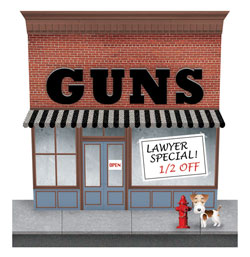 Being on the cutting edge of consumerism used to mean you had the most recent iteration of a cellphone or music player or tablet computer. But the latest must-have—No. 1 with a bullet—is the handgun.

Fear of curtailment of gun rights, as well as a sputtering economy—which tends to foster a survivalist mindset in some quarters—have triggered a grab for all available firearms. And, since every state but Illinois has a concealed-carry law, it seems that more folks want to try to keep the peace by carrying a piece.

Lawyers—perhaps more than most other professionals—have reason to be somewhat skittish on the subject of guns because they often deal with cases that can be quite emotionally charged. So you’d think they’d recoil at the thought of being anywhere near firearms.

But lately, it’s starting to look as though lawyers have not only embraced the idea of packing heat but are also picking up some bad habits and practices more typical of some of their clients.

Lumpkin County (Ga.) Superior Court Judge David E. Barrett presided in February at a bond hearing for a former sheriff’s deputy charged with rape and assault with a handgun. Deeming the alleged victim’s testimony evasive, according to published reports, Barrett produced a gun from inside of his robe, offered it to her and said, “You know, ma’am, if you really want to kill your lawyer, let me give you my pistol here.”

Barrett was supposedly trying to make the rhetorical point that the woman was killing her own case, but the incident was reported to the Georgia Judicial Qualifications Commission and he resigned at the end of the month.

Lawyers and guns are apparently a bad combination outside of the courtroom as well.

Addison, Texas, attorney Judith Kenney had a loaded .38-caliber revolver in a computer bag as she passed through security in late January at Dallas/Fort Worth International Airport. A shift change contributed to a failure to seize the bag before Kenney walked off with it.

All female passengers were ordered off the plane and Kenney, who claimed she forgot the gun was in the bag, was arrested. In March a grand jury found insufficient probable cause to go to trial.

And in Rockville Centre, N.Y., on Long Island, a onetime Bronx prosecutor went ballistic when she thought someone was playing games with her.

Bernadette Greenwald had answered her door in late January a couple of times, but whoever rang the bell had run away—a juvenile game known as “ding-dong ditch.”

When it happened a third time, Greenwald came to the door with her pink 9mm pistol and fired it in the direction of a teenage neighbor, intentionally missing him.

Greenwald, who was quoted as saying she only meant to scare the boy, was charged with second-degree menacing, reckless endangerment and unlawful use of a weapon.

With the legal profession so often in society’s crosshairs, lawyer gun owners can’t continue this half-cocked handling of their weapons.

Just wondering: Does the NRA have a CLE program?