Predictive coding is on the rise in courts

Last April, Law by the Numbers first appeared in the ABA Journal with a study of the effectiveness of technology-assisted review in e-discovery cases. For our first anniversary, we return to the subject with a study showing TAR and predictive coding are getting increased attention in America’s court system.

Kroll Ontrack’s 2012 analysis of 70 state or federal judicial opinions affecting electronically stored information discussed five issues considered in those opinions, including cost, sanctions, procedural issues, discoverability and admissibility, and TAR or predictive coding. While two cases—Da Silva Moore v. Publicis Groupe in New York federal courts and Global Aerospace v. Landow Aviation in Virginia state courts—made headlines by being the first cases in which judges approved use of predictive coding procedures, the Kroll analysis shows they aren’t the only instances of court decisions on the issue. The analysis found nine percent of the total opinions discuss either predictive coding, which uses a computerized sample to find effective search terms and reduce the amount of electronically stored information, or TAR, which combines lawyer review of ESI and predictive coding—both reducing the number of documents reviewed and the resulting review costs.

“Across the entire electronic discovery reference model,” says Michele Lange, Kroll Ontrack’s director of e-discovery thought leadership and industry relations, “many notable e-discovery trends emerged in 2012, but none promises to change the status quo more than the line of opinions approving the use of technologyassisted review.”

Kroll Ontrack is a provider of e-discovery, data management and data recovery products and services. Findings in its analysis “are based on 70 prominent e-discovery cases selected between January and December 2012. Each opinion selected was summarized, categorized and added to an ongoing database of e-discovery case law summaries, which are available on its website. 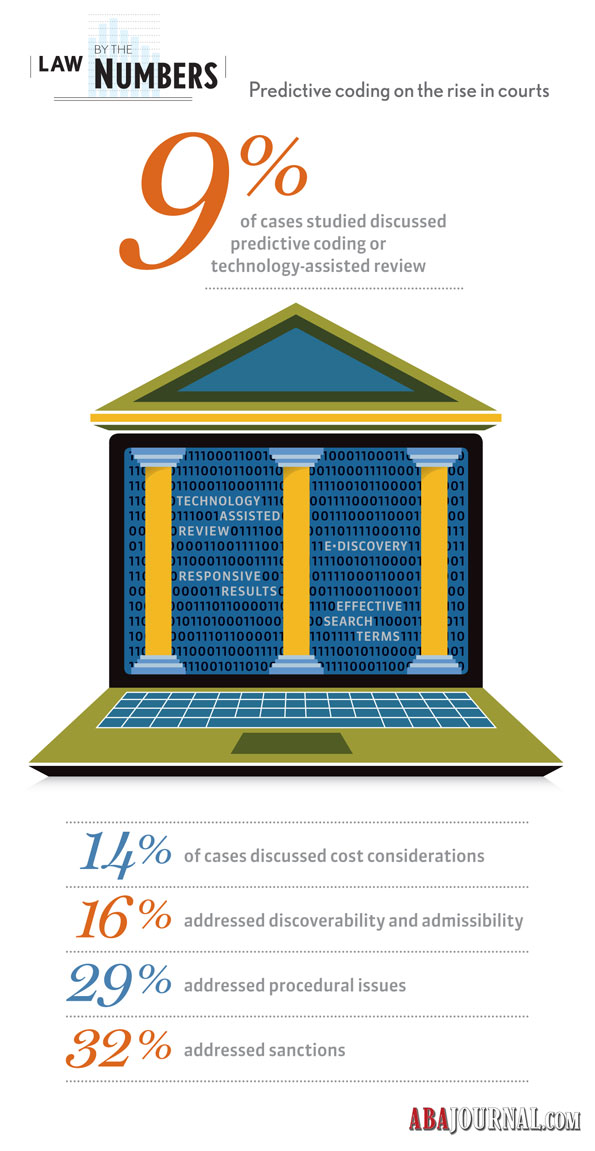