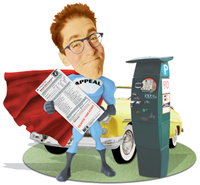 It’s comforting to know that as U.S. citizens we’re guaranteed our day in (traffic) court to explain how we were just-having-a-really-bad-day-and-can’t-we-just-kind-of-consider-this-a-warning. But it’s actually quite intimidating for the average person once he or she gets there.

Despite amassing dubious credentials as armchair lawyers based on courtroom dramas on TV and at the movies, people tend to feel rather vulnerable when it comes to facing the black robe. So why should they have to risk some kind of draconian retribution just because they choose to have their say?

Take, for example, Indianapolis motorists, who are warned that if they choose to contest a parking or traffic ticket in court they can incur fines of as much as $2,500 if they lose. Ouch!

So who’s watching out for the financial well-being of the everyman (or at least the Indy variety thereof)? Paul K. Ogden, that’s who. Ogden of Roberts & Bishop in Indianapolis filed a class action lawsuit in Marion County Superior Court in December on behalf of past, present and future motorists appearing before two of the county’s traffic courts, alleging that excessive fines are being assessed in violation of the state constitution.

In a blog post last February, Ogden puts it in plain language that is likely vox populi in any jurisdiction—he says “the deck is stacked against the motorist.”

In a recent post related to the suit, he adds: “The principle that justice should be freely administered and not come accompanied by the threat of a fine is simply too important to ignore.”

If he succeeds, Ogden could become a hero to all those folks in Marion County with bruised wallets. And who knows? All that money not spent on fines might go into the local economy, leading to filled municipal coffers and shiny new police cars and … oops, let’s keep that cockeyed optimism in check.

Elsewhere, in the scenic Northwest, another lawyer dug in his heels to address a different sort of court inequity. Andy Magee of Seattle embarked on a 4-year quest to have a traffic conviction overturned.

History: Magee was helping a friend with a car stalled on a freeway on-ramp in 2005. He drove his own car to the opposite shoulder and—very carefully, he claims—made a U-turn, ending up nose to nose with the friend’s car to jump-start it. Alarmed motorists called state troopers and Magee was ticketed for driving the wrong way on the freeway.

Convinced that he had done nothing wrong, and that the trooper had to have witnessed the alleged violation to legally issue a ticket, Magee stated his case in local traffic court, Pierce County Superior Court and the Washington Court of Appeals before reaching the Washington Supreme Court—where in December he won.

Magee, who estimated it would have cost a nonlawyer $30,000 to do what he did,was quoted as saying that people “should be able to believe that they can be heard and have the facts presented.”

That has a nice ring to it, doesn’t it? Having one’s day in court should represent a chance for justice to prevail—not a risk of being railroaded into the poorhouse.