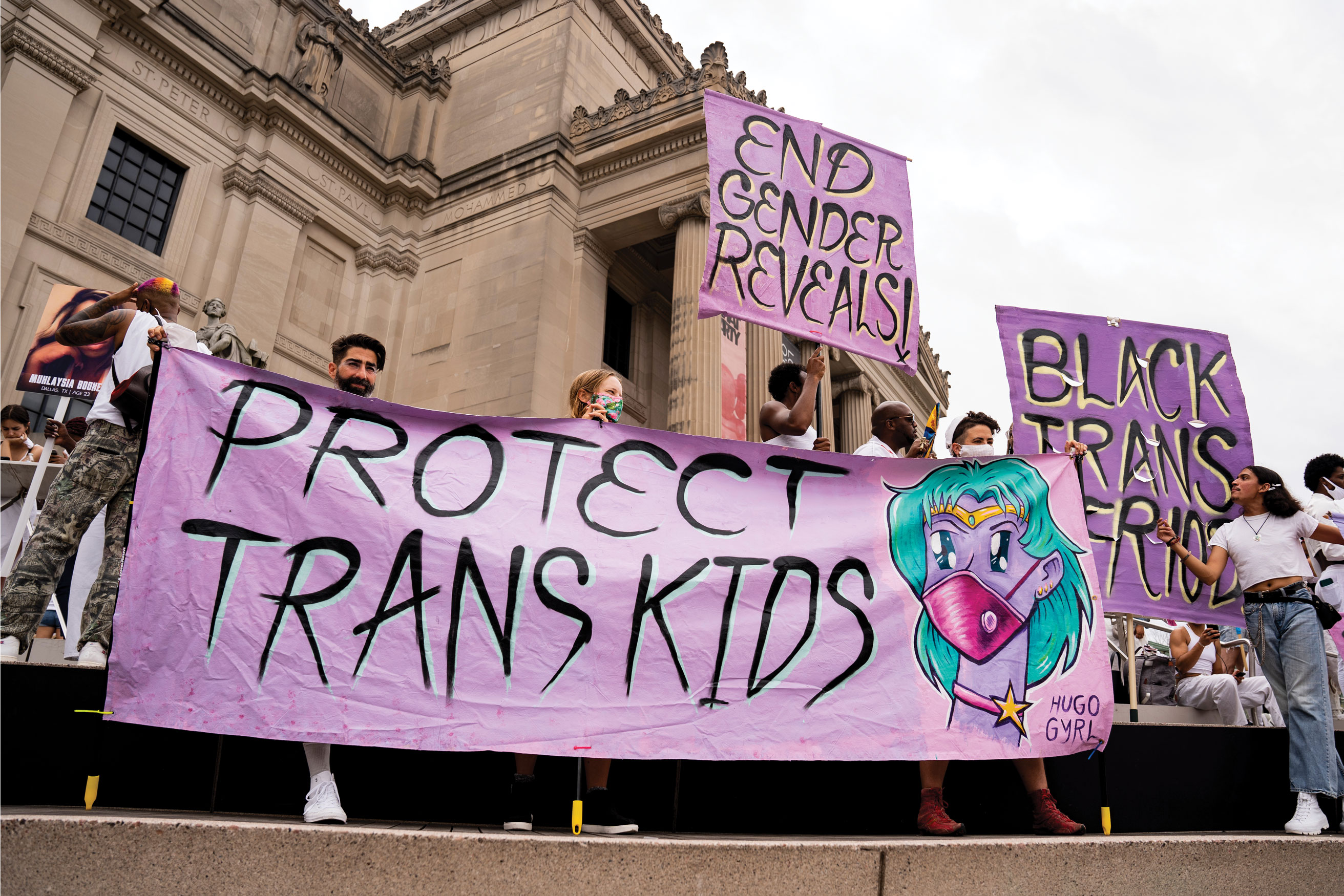 At age 14, Indigo Giles realized they preferred to identify as nonbinary—neither female nor male—a realization that led to gender dysphoria, which is the psychological distress felt when someone’s gender identity does not match the sex assigned at birth.

Giles obtained gender-affirming medical care in the form of a breast reduction at age 17 with the help of supportive parents. But before undergoing the surgery, Giles endured many psychiatric evaluations and bouts of depression.

These experiences motivated Giles, who completed their freshman year at the University of Texas at Austin in the spring, to testify in April before the Texas legislature against two bills that would deny gender-affirming medical care to transgender minors.

“There are so many things we should be focusing on in Texas instead of worrying about children’s genitals,” Giles said in an interview with the ABA Journal. “These politicians don’t care that their legislation will have a real hurtful impact on the lives of so many children.

“They don’t see us as real people,” they added. “They see as pawns in their made-up culture war.”

Several are health care bills that would deny gender-affirming care to minors who seek medical treatment to alleviate gender dysphoria; another cluster of bills would ban trans athletes from competing alongside cisgender (those whose gender identity matches their birth sex) women.

Trans youth are an at-risk population, according to the Trevor Project’s 2020 National Survey on LGBTQ Youth Mental Health. It found 48% of LGBTQ youth reported engaging in self-harm in the past 12 months, including more than 60% of transgender and nonbinary youth.

“If these bills take effect, they will jeopardize the health and lives of trans youth by depriving them of life-saving medical care,” says Ezra Cukor, a New York City-based attorney who serves on the Board of Directors of the National Trans Bar Association.

Some measures would also take away doctors’ licenses or impose felony penalties on providers who perform such care.

In April, Arkansas passed the Save Adolescents from Experimentation Act: Under the law, transgender minors cannot receive hormone treatments or gender transition-related surgeries. The state’s Republican Gov. Asa Hutchinson vetoed the measure in April, calling it “too extreme,” and said it “puts a very vulnerable population in a more difficult position.” But the Arkansas legislature overrode his veto.

In May, 13 plaintiffs, including two doctors, with help from the American Civil Liberties Union, challenged the law in federal court. “For some adolescent patients with gender dysphoria, puberty-delaying treatment and hormone therapy are medically indicated to alleviate severe distress,” the Brandt v. Rutledge complaint says. The lawsuit alleges the law violates equal protection, the due process right to parental autonomy and the First Amendment by limiting the speech of health care providers about certain medical procedures.

On July 21, a federal judge put a temporary hold on the law in Arkansas, which was set to go into effect the following week. A U.S. district judge also put a hold on a West Virginia law that would ban trans athletes in women’s sports. That law had gone into effect in early July.

The Texas state legislature considered a similar measure that would criminalize doctors providing or guardians consenting to gender-affirming care for transgender minors, classifying it as child abuse—one of the bills that Giles testified against. The bill did not pass.

Alabama also considered a measure making it a felony for health care providers to give gender-affirming care to minors; they could receive up to 10 years in prison. The bill passed the Senate but failed to get a House vote before the legislative session ended in May.

Margaret S. Clarke, general counsel for the Eagle Forum of Alabama, a conservative policy group, supports the Alabama measure and similar bills. “It is the responsibility of the state to issue reasonable regulations to protect the public health and to protect vulnerable citizens from abuse, particularly children,” she says, citing the U.S. Supreme Court decision Jacobson v. Massachusetts (1905), in which the court rejected a free-expression challenge to a mandatory vaccination law for smallpox.

Clarke also points to a December decision by the High Court of Justice for England and Wales, Bell v. Tavistock, in which the court reasoned that children under 16 could not give informed consent to puberty blockers, a treatment for gender dysphoria. “There is no age-appropriate way to explain to many of these children what losing their fertility or full sexual function may mean to them in later years,” the court said.

In April, the American Medical Association issued an open letter to governors, saying it’s “harmful” for states to “limit the range of options physicians and families may consider when making decisions for pediatric patients.” Sports bans A 2021 Gallup poll found 62% of Americans favor athletes competing only on sports teams matching their birth gender, while 34% say athletes should play on teams matching their gender identity.

But Oakley says trans females competing in sports is not new. “It has happened for decades,” she says. “There has been no takeover of sports by transgender athletes. That is a myth.”

In March 2020, Idaho passed the Fairness in Women’s Sports Act, prohibiting student transgender female athletes from competing on women’s sports teams reserved for cisgender females. Under the first-of-its-kind law, if someone challenges a person’s sexual status, the law requires the student to undergo sex verification exams.

The law also allows cisgender females to have a private right of action to sue schools that allow transgender female athletes to compete.

Lindsay Hecox, a transgender female athlete who attended Boise State University, as well as a then-17-year-old girl known in court papers as Jane Doe who fears being subjected to a sex verification exam because of her masculine appearance, challenged the law in an April 2020 suit, claiming it violated the equal protection clause. In August 2020, U.S. District Judge David Nye granted a preliminary injunction against the law, writing that it “is directed at excluding women and girls who are transgender, rather than promoting sex equality and opportunities for women.”

Idaho Republican Gov. Brad Little and other defendants appealed Nye’s decision to the San Francisco-based 9th U.S. Circuit Court of Appeals. In May, the 9th Circuit asked the parties to brief whether Hecox’s claim is moot, as she is no longer a student, and whether Jane Doe can have legal standing based on risks associated with her possibly having a sex verification exam.

The Idaho law inspired bills in at least 30 other states, according to the Human Rights Campaign, with eight states enacting such laws in 2021. In June, the Human Rights Campaign Foundation filed a federal civil rights lawsuit in the Southern District of Florida challenging that state’s transgender athlete law. The foundation plans more suits over similar laws in other states.

LBGTQ advocates see recent legal measures as the latest iteration of a continuing culture clash. They scored some legal victories in the U.S. Supreme Court, including the right to same-sex marriage in Obergefell v. Hodges (2015) and the extension of Title VII to cover transgender employees in Bostock v. Clayton County (2020). Also, two federal appeals courts ruled in August 2020 that not allowing transgender students to use restrooms consistent with their gender identity violates both Title IX and the equal protection clause. In June, the Supreme Court declined to hear one of those cases, Gloucester County School Board v. Grimm, leaving those holdings intact.

“Opponents of LGBTQ+ people intensified their attacks on trans people after they lost on marriage equality. They focused on bathrooms and locker rooms in an attempt to banish trans people from public space and failed,” Cukor says. “So now they are targeting trans youth.”

But the fight continues as conservative advocacy groups such as Eagle Forum, the Heritage Foundation and Alliance Defending Freedom support many recent measures. The bills seem politically popular to some legislators, says University of Kansas law professor Kyle Velte. “This wave of anti-transgender bills is a play to the right-wing base of the Republican Party in anticipation of the 2022 midterm election.”

Giles vows to continue the fight. “I don’t have any other choice,” they say. “But I really do think that the country is moving away from archaic, discriminatory viewpoints. The other side knows it is a losing fight.”

This story was originally published in the August/September 2021 issue of the ABA Journal under the headline: “Trans Legislation: States drive a wave of bills affecting transgender youth.”

This article has been updated to reflect changes in Arkansas and West Virginia between press time and publication.