Students are collateral damage in America's war on teachers 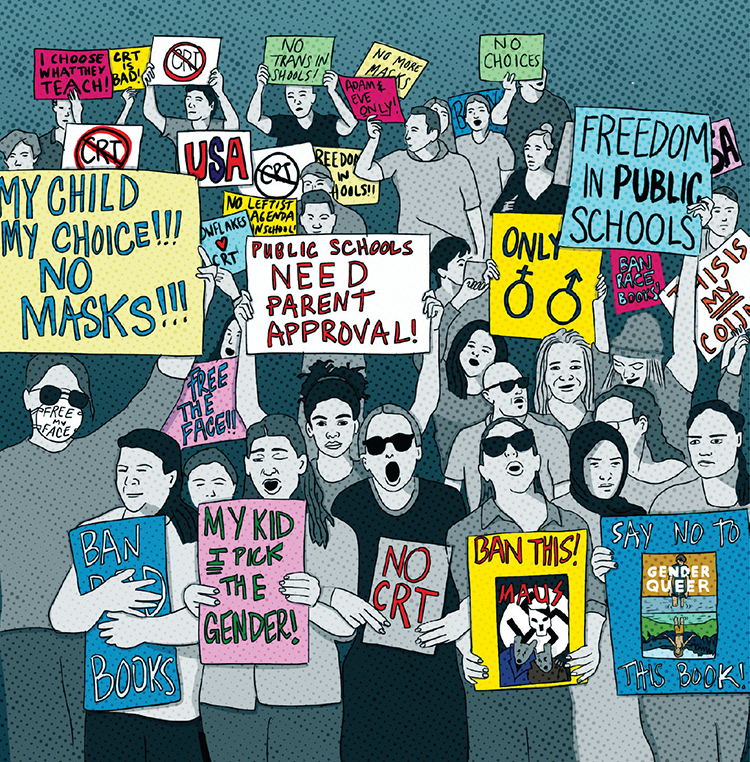 Historically, wars are fought against a destructive enemy, real or theoretical, like the war on drugs. But factions of our country are battling a target that serves as a bulwark of our society: teachers.

From the recent passage of Florida’s so-called Don’t Say Gay law to legislation purportedly banning the teaching of critical race theory, conservative lawmakers are transmogrifying schools into cultural battlegrounds and positioning teachers as enemies of the state intent on leftist indoctrination.

An outgrowth of a pattern of far-right legislation addressing problems that don’t exist, Florida’s Parental Rights in Education law goes into effect in July and forbids classroom instruction on sexual orientation and gender identity in kindergarten through third grade. Gay rights advocates have sued Gov. Ron DeSantis and other officials, alleging the law marginalizes LGBTQ people and violates the free speech, equal protection and due process rights of students and families. The lawsuit notes that the law is broad and overly vague—inviting discriminatory enforcement—and it empowers parents to become roving censors who can sue school boards for damages based on perceived violations.

Critics say the wave of meddling in the classroom is an abuse of power by the state. Supporters say it’s a means to give parents control over what their children learn. But censoring topics on this country’s racist past and present, sexual orientation and gender identity is dangerously reminiscent of the anti-intellectualism and thought control of Mao Zedong or Nazi Germany.

The Tennessee legislature is considering a bill that would bar discussion, textbooks and instructional materials on “LGBT issues or lifestyle” in public schools because they offend Christian values. In Iowa, Gov. Kim Reynolds signed a law she described as targeting “divisive” concepts in the classroom, like critical race theory.

Gov. Reynolds’ reasoning ignores the fact that critical race theory is actually a graduate education curriculum taught at select universities that explores systemic racism and structural inequality in our society. But right-wing fearmongers have leaned into a straw man fallacy and insist it’s being used to promote the idea that one race is superior or inferior and is making white kids feel bad about themselves. They also falsely allege this “dangerous” curriculum is being taught to children in their districts. This sort of bat-signal dog whistle is a tried-and-true method conservatives have used to summon and rile their base since the truth has become less important than stifling diversity.

The opposite of indoctrination

The war on teachers shows the true fear is that introducing young people to ideas about diversity and inclusion will counteract the indoctrination of outdated values on race, sex and gender that perpetuate bigotry.

According to Education Week, about 42 states have introduced measures inhibiting conversations about race and the history of structural racism, while 17 have imposed restrictions. In New Hampshire, the state set up a webpage allowing parents and students to lodge complaints against teachers they believe have violated a 2021 law that bans certain teachings on race, racism and sexism. An activist group offered a $500 bounty for the first person to successfully catch a public school teacher breaking the state’s law.

Gender identity and LGBTQ+ rights have proved to be hot-button issues. USA Today in March noted that about 280 anti-trans measures involving athletics, education, health care or bathroom access have been proposed in 2022. Also in March, Texas Attorney General Ken Paxton sent a letter to the Austin Independent School District claiming its annual Pride Week celebration was breaking the law because: “The Texas Legislature has made it clear that when it comes to sex education, parents—not school districts—are in charge.” This despite the fact that sexual orientation is not the same as sex education. Pride Week went forward in Austin, but the chilling effect of this sort of overreach has been successful in other districts.

It’s possible some of these restrictive laws will end up before the U.S. Supreme Court, which has expounded in the past on the rights of teachers to instruct without censure. But with a conservative supermajority in the court, these cases might turn out differently.

The Supreme Court’s 1982 decision in Board of Education v. Pico should be instructive. In his majority opinion, Justice William Brennan emphasized that a school board can’t determine the content of a school library by removing books in a “narrowly partisan or political manner,” explaining:

“The state may not, consistently with the spirit of the First Amendment, contract the spectrum of available knowledge. In keeping with this principle, we have held that, in a variety of contexts, ‘the Constitution protects the right to receive information and ideas.’”

Justice Brennan gave the example that an all-white school board motivated by racial animus could not decide to remove books advocating for racial equality and integration, noting:

“Our Constitution does not permit the official suppression of ideas. … If petitioners intended by their removal decision to deny respondents access to ideas with which petitioners disagreed, and if this intent was the decisive factor in petitioners’ decision, then petitioners have exercised their discretion in violation of the Constitution.”

But in recent months, it’s become clear this court is more than willing to break with precedent. And attempts to suppress information and diversity of thought have created a climate of fear among educators. Ultimately, inhibiting the free exchange of ideas and targeting teachers threatens our ability to recruit professionals, provide quality education and graduate an informed and enlightened citizenry.

This story was originally published in the June/July 2022 issue of the ABA Journal under the headline: “Aiming at Educators: Students are collateral damage in America’s war on teachers.”

Intersection is a column that explores issues of race, gender and law across America's criminal and social justice landscape.

This column reflects the opinions of the author and not necessarily the views of the ABA Journal—or the ABA.