55 years after first SCOTUS appearance, lawyer is back for second redistricting case 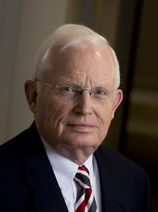 Lawyer Emmet Jopling Bondurant II was only 26 in November 1963 when he first appeared before the U.S. Supreme Court to argue that congressional districts should have equal populations.

Bondurant won the case, Wesberry v. Sanders, and he’s hoping for the same result when he appears before the Supreme Court on Tuesday to argue a new redistricting case, NPR reports.

In Rucho v. Common Cause, Bondurant is challenging the drawing of North Carolina political boundaries to benefit the Republican Party. It is being argued with a Maryland case in which Democrats are accused of redrawing boundaries to target a Republican congressman, report NPR, SCOTUSblog, the Wall Street Journal and USA Today.

When Bondurant worked on Wesberry, he spent hours and weekends toiling for free. Working with data on district representation was time-consuming in an era when hand-held calculators did not yet exist, he told NPR.

“You were working with the 1960 census, and a legal pad and a pencil,” Bondurant said. “And if you made a mistake in one area it affected everything you’d done, like a series of dominos.”

The Supreme Court ruled in Bondurant’s favor when it held that districts must have the same population in states with more than one U.S. congressman.

Bondurant’s current age is 82, and he says he has no plans to retire or to quit his work to improve democracy through the courts.

“I’d rather spend my time doing that than playing golf, in part because I play golf so badly that the opportunity not to play is itself a positive,” Bondurant told NPR. “But this is really important stuff, and it’s very fundamental.”