ABA vows to fight challenges to free and fair elections 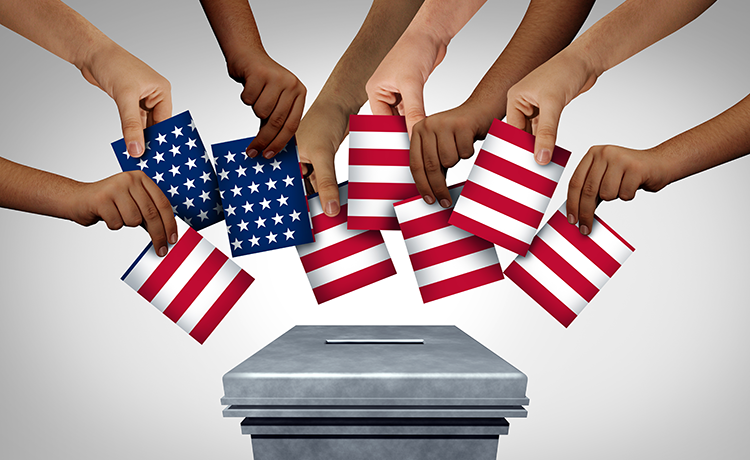 The ABA House of Delegates on Monday approved two late-filed resolutions that address efforts to restrict voting after the 2020 presidential election.

• Allowing state authorities to decertify the results of elections.

• Permitting state legislatures to remove election officials from office or take over their authority to administer elections.

• Conducting voter purges that are not authorized by the National Voter Registration Act.

• Limiting voting through restrictions to absentee or mail-in voting.

“Resolution 800 addresses a critical problem in our nation,” said Lucy Thomson, a District of Columbia Bar representative to the House of Delegates, who introduced the measure. “And it’s an issue that has been important to the ABA for over 30 years—ensuring free and fair elections and protecting democracy. This issue is even more critical now that state laws are undermining the right of Americans to vote.”

More than one-third of all restrictive voting laws from the past decade were passed in 2021 alone, says the report accompanying the resolution. According to data from the Brennan Center for Justice, which is cited in the report, at least 19 states passed 34 laws that restricted access to voting between Jan. 1, 2021 and Dec. 7.

Altogether, legislators in 49 states introduced more than 440 bills that included provisions to restrict voting during their 2021 legislative sessions.

Thomson told the House of Delegates that these laws are fundamentally altering how elections are conducted, curtailing voting rights and disenfranchising significant numbers of voters. She also emphasized the importance of immediately taking action to protect the right to vote, as more than 30 primaries will take place across the country before August.

“Time is of the essence,” said Thomson, who is also a past chair of the Section of Science & Technology Law. “Democracy is on fire, and it’s very necessary that the ABA have the policy it needs to be able to speak out on these issues.”

“Because efforts to restrict or undermine access to the ballot or to interfere with the administration of elections are direct threats to the democratic process and the rule of law in our nation, I believe it’s a misnomer when some call defending the right to vote political or partisan,” said Boston, the president of the New York City Bar Association. “How is it partisan to defend and unburden the right to vote and to make sure that our election administration processes remain nonpartisan and independent?

“And then, who will defend this fundamental right, if not us? If not the lawyers? More specifically, if not bar associations?”

ABA President Reginald Turner had stressed the ABA’s support for voting rights in his earlier speech to the House, saying, “We oppose any barriers to fair and open elections and any subversion of the voting process.”

The House of Delegates also approved Resolution 801, which advocates for election reform at the federal level.

The resolution urges Congress to amend the Electoral Count Act, a law enacted in 1887 that governs how electoral votes are counted after a presidential election and what happens if the results are disputed. The resolution has three suggestions for changes to the ECA:

• The vice-president or other presiding officer should have only a ministerial role at the Joint Session of Congress that is convened to count and certify electoral votes.

• These objections should only be sustained with a majority vote of both the Senate and House of Representatives.

Lawmakers began considering changes to the ECA after supporters of then-President Donald Trump attacked the U.S. Capitol during the count of the Electoral College votes, seeking to overturn the results of the 2020 election. Sen. Joe Manchin, D-W.Va., and Sen. Lisa Murkowski, R-Alaska, told CNN in early February that a bipartisan group was gaining traction in their negotiations over reforms.

“When a mob attacked the U.S. Capitol on Jan. 6, 2021, it attacked more than the Capitol,” Estelle Rogers, chair of the Standing Committee on Election Law, said when introducing the resolution. “It attacked our democratic system of government and the rule of law. You have probably been as astonished as I have at the disparate versions of Jan. 6 that have emerged, largely along partisan lines.”

She told the House that lawmakers intend to act on the ECA soon and that it is imperative the ABA be involved in the process.

“Because this is a rare bipartisan effort to legislate on such an important matter, the peaceful transfer of power at the core of our democracy, it cries out for the American Bar Association to lend its voice,” Rogers said. “Because it is probably the only election-related legislation that will pass this year, it is even more important.”

Several others, including Stephen Saltzburg, a Criminal Justice Section representative to the House of Delegates, spoke in support of the resolution.

Saltzburg urged his colleagues to vote for the resolution, contending that its provisions are simple and straightforward.

“Each one of these recommendations has widespread support, bipartisan support,” he said. “The only voice that we ask to be heard is the ABA’s on this. It would be an embarrassment if during the debate, the American Bar Association had no participation.”

Resolution 801, which is co-sponsored by the Standing Committee on Election Law, the Criminal Justice Section and Section of Civil Rights and Social Justice, also urges Congress to introduce amendments to the law that “clarify and modernize its language and structure generally.”

Motions were made to postpone both resolutions indefinitely because they were filed the weekend before the House of Delegates meeting. Those motions were defeated.