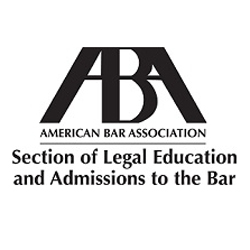 An ABA committee has voted to recommend the adoption of a tougher but simpler bar passage requirement in the law school accreditation standards.

Under the proposed new standard (PDF), approved Friday by the Section of Legal Education and Admission to the Bar’s Standards Review Committee, a law school would have to show that at least 75 percent of its graduates who took a bar exam within two years of their graduation passed.

The proposal would eliminate altogether the first-time bar passage test contained in the current standard, which a law school can meet by showing that its first-time bar passage rate is no more than 15 points below the average bar-pass rate for ABA-approved schools in states where its graduates took the exam.

The proposal would not relieve a school of its obligation to report and publish its first-time bar passage rate. But it would eliminate a loophole that now allows schools to exclude a group of test-takers called “nonpersisters”—graduates who fail a bar exam once and don’t take it again the next two times it is offered—from their calculations.

The committee, which met Friday and Saturday in New Orleans, recommends changes in the standards to the section’s governing council, which must approve of any amendments to the standards. Its recommendation will now go to the council, which will consider at its March meeting in Phoenix whether to approve the committee’s proposal for notice and comment.

At its meeting in New Orleans, the committee also decided not to make any changes in four previously recommended revisions to the standards that have already gone out for notice and comment, including one that would eliminate the current prohibition on students receiving academic credit for paid externships, which many clinicians oppose. If the council approves those proposed changes at its meeting in March, they will come before the House of Delegates at the ABA Annual Meeting in San Francisco in August. The House can either concur with the changes or refer them back to the council for reconsideration, but the council has the final say.

One alternative approach to the current admissions standard would require a school to adopt, publish and adhere to sound admission policies and practices, but would also note that compliance with the bar passage requirement alone is not sufficient to demonstrate compliance with the standard. The other alternative would include all of the requirements of the first approach, but would also say that a school with an attrition rate (not including transfers) above a certain percent (to be determined by the council) bears the burden of proving it is in compliance with the standard.

One alternative to the current requirement that all applicants take a valid and reliable admission test to assist the school in assessing the applicant’s ability to complete its program would require a school that uses an admission test other than the Law School Admission Test to demonstrate that that test is valid and reliable. The other would do away with the test requirement altogether.