ABA's rule of law work in Tunisia and Libya 'more complex, challenging, difficult and rewarding than I ever expected'

By William Hammink, former ABA ROLI Country Director for Tunisia and for Libya 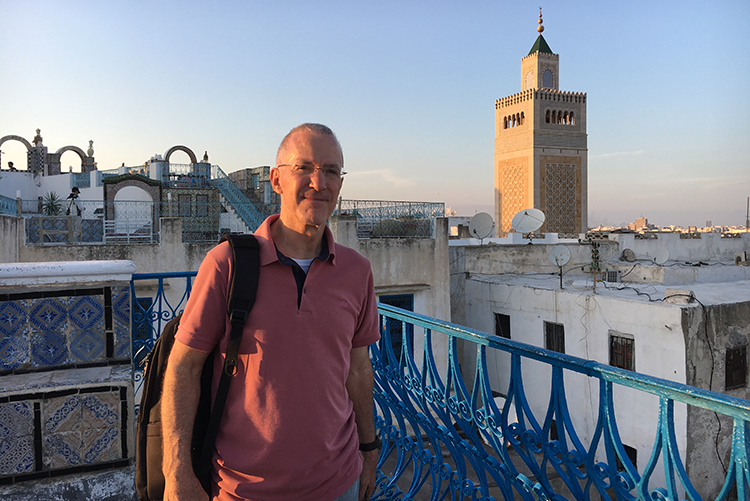 William Hammink spent 36 years with USAID before serving more than a year as ABA ROLI country director for Tunisia and Libya. Photo provided by Hammink.

The ABA's Rule of Law Initiative demands the highest level of legal and judicial expertise to work with local legal and judicial authorities in totally different and challenging country environments. However, as I have seen as country director of the ROLI offices in Tunisia and Libya, ROLI is more than a team of global experts of lawyers and judges, but also an incredibly dedicated team of management, logistics, financial, security and systems experts working together to implement key rule of law and human rights programs with partners. 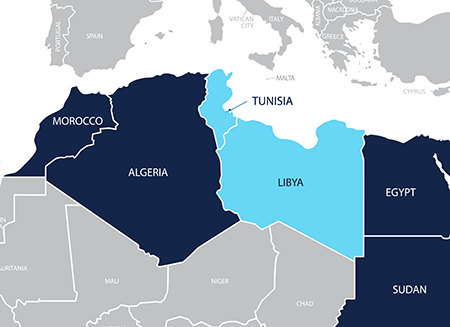 I found that ROLI must be at the same time strategic, opportunistic, flexible and highly professional and ethical working in complex, many times post-conflict, countries to achieve results and continue to receive donor funding. Quite a challenge for anyone.

Like many other complex countries where ROLI works, Libya and Tunisia challenged me and the entire ROLI team almost daily. After 36 years with the U.S. Agency for International Development, working in nine different countries and managing several billion-dollar programs, including heading the USAID programs in Afghanistan, Sudan and Ethiopia, I found the ROLI Tunisia and Libya programs to be more complex, challenging, difficult and rewarding than I ever expected.

ROLI’s programs in both Libya and Tunisia are tied to the Arab Spring. Most experts agree this started in Tunisia in late 2010 with a revolution forcing the dictator Ben Ali to flee the country. Existing institutions, including the Tunisian bar asssociation, or Ordre National des Avocats de Tunisie, worked together with citizens around the country to develop a new democratic constitution, hold multiparty elections and manage a peaceful democratic transition. The Tunisian bar association was one of four Tunisian institutions to receive a Nobel Peace Prize in 2015 for their incredible role in the peaceful democratic transition. Tunisia remains a fragile new democratic state; the economy and jobs are lagging badly, and the country remains threatened by terrorism and insecure neighbors. But new presidential elections are planned later this year, and the democratic process moves on, including work toward a more independent judiciary and rule of law.

Sadly, Libya remains fractured, insecure and still in conflict. Violence started again just a few months ago in and around the capital of Tripoli. The 2011 Arab Spring revolution in Libya bloodily ousted the longtime dictator Moammar Gadhafi but did not result in a peaceful transition. Libya remains beset by fractured localized political and militia groups fighting for power and influence. There are multiple militias and security forces and two governments, one in the east and one in the west. However, there remains one unified judiciary in Libya that is working to stay nonpolitical and unified. Interestingly, in Libya a recent survey found the Libyan judiciary is one of the top-ranked national institutions in terms of confidence and trust.

Following the revolutions in both countries and now in increasingly complex environments, we expanded our programs significantly. By 2018, ROLI was implementing nine different rule of law and human rights programs funded by the United States and Swedish governments. With severe fighting around Tripoli in 2014, ROLI with other international organizations pulled out all international staff from Tripoli, while maintaining a small office of five Libyan professionals in the Tripoli office. Compounding the complexity was the need for ROLI management to oversee the Libya programs and staff remotely from the ROLI office in Tunis. American staff members have still not been able to return to Libya. 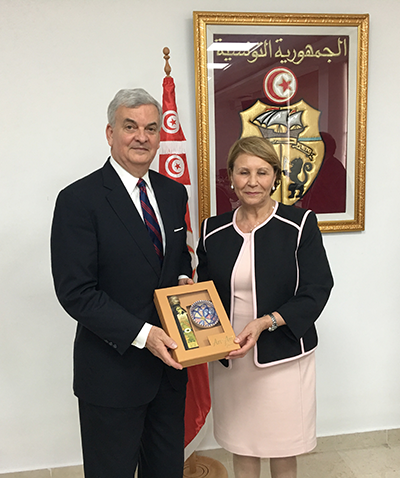 ABA ROLI Director Alberto Mora (left) met with Neziha Labidi, the minister of women, family and children’s affairs, during his visit to Tunis in October 2018. Photo provided by William Hammink.

Not surprisingly, ROLI in both countries has a great reputation. For me, as a newcomer to ROLI, it was relatively easy to reach out to key Tunisian and Libyan partners. In Tunisia, many lawyers and judges remember trainings that they had with American ABA lawyers and judges from 2012 and before, thus opening the door today to continued collaboration and partnership with the current leadership of the bar association and judiciary. In Libya, ROLI also maintains excellent relationships with the Libyan judiciary, Ministry of Justice, the Libyan Bar Association and law faculties, mainly through its outstanding Libyan staff. In Tunisia, ROLI holds a handful of new letters of commitment with key Tunisian government and nongovernmental organizations, including the Ministry of Women’s Affairs, the Tunisian Young Lawyers Association and the Judicial Training Institute, which is part of the Ministry of Justice.

Given the incredible challenges of working in these complex country environments, and the fact that almost all the ROLI-organized programs were held in Tunisia and in Libya, along with the stringent donor financial and contracting requirements, ROLI needed strong management and planning. Security is also a major issue for Libya and parts of Tunisia, another major consideration for each consultancy and training event. Our Tunisia and Libya offices had management and security experts, financial managers and program managers to ensure that programs were held as planned and in an outstanding fashion. Not surprisingly, part of the work of management, administrative and financial staff was problem-solving, since these events rarely happened without some issues.

Understanding the country context has been key. ROLI has developed several approaches that we could use and build on. First, ROLI requires a Local Office Policy Manual (LOPM) for each country, which is specific to the laws of the country as well as encompassing key ABA and ROLI global policies. The country teams and I spent a lot of time this past year developing the Tunisia and Libya LOPMs. Second, ROLI depends on local staff and its expertise, along with local judicial and legal program consultants for trainings and studies. Again, we had terrific Tunisian and Libyan staff working closely with American and other international experts. Third, ROLI continuously reaches out to key local partner organizations, such as the bar association, judicial and legal training institutes, ministries of justice and other key ministries and other related organizations such as the legal committees of the chambers of commerce, local think tanks and other international organizations working on rule of law, administration of justice and human rights. We negotiated closely with leadership from these organizations, and the letters of commitment mentioned earlier are a key institutional mechanism to ensure local leadership.

I had the honor to serve as ROLI country director for just over a year based in Tunis. I found that ROLI is a truly professional organization with all the challenges of any development organization working in complex, post-conflict environments but also with the legal and judicial expertise and reach-back of ABA and affiliates to expand our impact on rule of law and human rights in people’s lives.

William Hammink served as the ABA ROLI country director for Libya and Tunisia, based in Tunis, Tunisia, from May 2018 to May 2019. Hammink is a recently retired career minister in the U.S. Senior Foreign Service who has 36 years of experience working with USAID, including as USAID mission director in Afghanistan, India, Sudan and Ethiopia, and assistant to the administrator for Afghanistan and Pakistan. Hammink served in nine countries, including Afghanistan, India, Sudan, Ethiopia, Russia, West Bank/Gaza, Madagascar, Senegal and Swaziland.