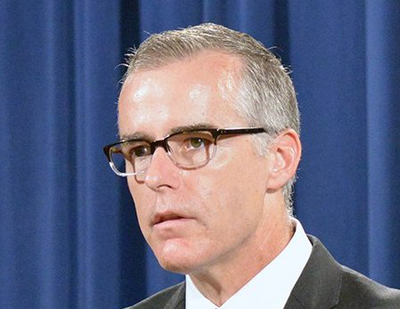 • A staff lawyer for an Ohio judge is facing possible discipline after he was accused of switching bar codes on Walmart merchandise before going through the self-checkout. The lawyer, Terrence Kensley Scott, was accused of paying $27 for items valued at $367. A police officer who confronted Scott outside the store had used a stun gun on the lawyer when he turned away. The Ohio Board of Professional Conduct is recommending a stayed six-month suspension. (The Columbus Dispatch, board recommendation)

• Former acting FBI Director Andrew McCabe has filed a lawsuit contending he was illegally fired as part of a plot by President Donald Trump to remove people who weren’t loyal to him. McCabe was fired less than a day before his planned retirement, which reduced his retirement benefits. The move followed a finding by the Justice Department’s inspector general that McCabe had lied about a news leak. (The Washington Post)

• Former White House counsel Don McGahn should be required to testify before the House Judiciary Committee, according to a committee lawsuit filed in Washington, D.C., federal court on Wednesday. The suit seeks an injunction ordering McGahn to testify and a ruling invalidating the White House claim that top presidential aides have absolute immunity from testifying. (The Washington Post, the New York Times, federal lawsuit)

• A federal appeals court has blocked the Equal Employment Opportunity Commission from enforcing guidance that discourages blanket bans on hiring people with criminal records. The 5th U.S. Circuit Court of Appeals sided with Texas and ruled Tuesday that the EEOC overstepped its statutory authority in issuing the guidance. (Law360; 5th Circuit decision)

• A Tennessee inmate sentenced to life in prison for killing a man when she was age 16 has been released from prison after the governor granted clemency. Cyntoia Brown was released Wednesday after serving 15 years in prison. She had claimed she shot the man who picked her up for sex because she thought he was going to hurt her. She is planning a memoir about her traumatic childhood and redemption. (NPR, the Tennessean)

• A federal appeals court has tossed a $5.5 million settlement in a suit over Google tracking software that directed money to internet privacy groups but paid nothing to consumers. The 3rd U.S. Circuit Court of Appeals said it wasn’t convinced that the settlement was fair and reasonable, and remanded for additional findings. (Law360, Reuters)

• An Ohio federal magistrate has authorized the sale of Western State College of Law, which was part of the embattled Argosy University System, to Westcliff University, a for-profit institution that offers undergraduate and graduate degrees in business and education. In a press release, Westcliff’s president said that they are committed to helping the law school recover from the receivership its parent company, Dream Center Education Holdings, was placed in, and start enrolling new students as soon as possible. (Western State College of Law press release)