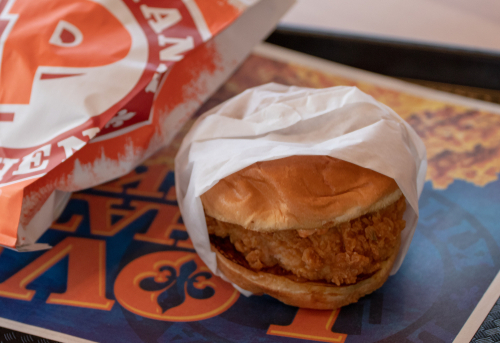 Popeyes sued for running out of chicken sandwiches

An East Ridge, Tennessee, man has filed a lawsuit against Popeyes for selling out of its new chicken sandwich. Craig Barr claims in a civil summons that the fast-food chain engaged in false advertising and deceptive business practices. He’s seeking $5,000 in damages for “countless time wasted driving to and from Popeyes.” In Houston, a different customer was so upset to learn there were no more sandwiches that he pulled a gun on restaurant employees, police said. (NBC News, ABC News, the Washington Post)

This judge is widely seen as Trump’s next SCOTUS pick

Judge Amy Coney Barrett is widely seen as President Donald Trump’s likely next nominee for the U.S. Supreme Court, if he gets a chance to make a nomination. Barrett has served on the 7th U.S. Circuit Court of Appeals since 2017. A former Notre Dame law professor, she has criticized Roe v. Wade. (CNBC)

Justice Ruth Bader Ginsburg posed a question Saturday that is on many people’s minds. “How am I feeling?” Ginsburg asked during an appearance at a book festival. “This audience can see that I am alive. And I am on my way to being very well.” Ginsburg had three weeks of radiation treatment for pancreatic cancer in August. (The New York Times, the Washington Post, How Appealing)

Alli Gerkman has died at the age of 41 after a four-year battle with breast cancer. Gerkman, who was quoted in ABA Journal stories, was senior director of the University of Denver’s Institute for the Advancement of the American Legal System. As part of her work, Gerkman launched Foundations for Practice to identify the skills and qualities needed by young lawyers (LawSites)

Katrina Dennis, a former partner at Saul Ewing, has died during the trial of her medical malpractice suit against her doctor and the University of Maryland St. Joseph Medical Center. Dennis, 39, was a regent for the University System of Maryland. She was diagnosed with the earliest form of breast cancer in 2015. She said her doctor led her to believe the cancer would not recur and failed to press her to use the drug Tamoxifen, which could have prevented the spread of her cancer. (The Baltimore Sun)

The 7th U.S. Circuit Court of Appeals has refused to reinstate a Second Amendment lawsuit challenging a ban on assault rifles in Cook County, Illinois. The court said it saw no reason to revisit its previous precedent upholding an ordinance banning the weapons in Highland Park, Illinois. (The Chicago Tribune, the Associated Press, Aug. 29 opinion by the 7th Circuit)