Alan Dershowitz accuser says she may have been wrong; defamation suits dropped 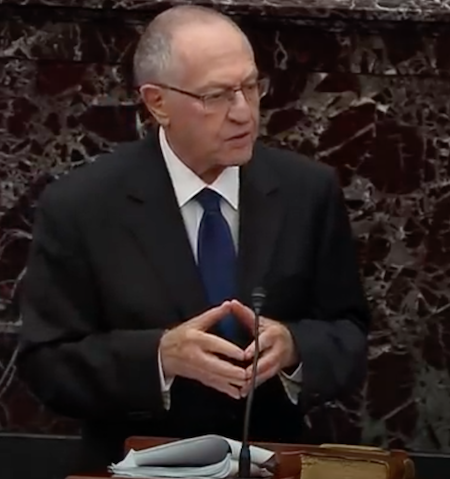 Alan Dershowitz in January 2020. Photo from the U.S. Senate, CC-PD-Mark, via Wikimedia Commons.

A woman who was victimized by sex trafficker and financier Jeffrey Epstein has retracted her allegation that Epstein lawyer Alan Dershowitz had sex with her when she was a minor.

Dershowitz, a former Harvard Law School professor, had represented Epstein when he was first charged in 2005 with paying underage girls to give him sexual massages.

Publications with coverage of the settlement include the New York Times, the New York Daily News, Reuters, Courthouse News Service and Original Jurisdiction.

The settlement did not include money payments, the parties said in a joint statement Tuesday. The settlement also resolved defamation litigation between Dershowitz and lawyer David Boies of of Boies Schiller Flexner, whose firm once represented Giuffre.

“I have long believed that I was trafficked by Jeffrey Epstein to Alan Dershowitz,” Giuffre said in the statement. “However, I was very young at the time, it was a very stressful and traumatic environment, and Mr. Dershowitz has from the beginning consistently denied these allegations. I now recognize I may have made a mistake in identifying Mr. Dershowitz. This litigation has been very stressful and burdensome for me and my family, and we believe it is time to bring it to an end and move on with our lives.”

For his part, Dershowitz retracted allegations against Boies.

“I also now believe that my allegations that David Boies engaged in an extortion plot and in suborning perjury were mistaken,” Dershowitz said.

Epstein pleaded guilty to state charges in 2008 and was later arrested on new federal charges of sex-trafficking minors. He hanged himself in jail in August 2019 after his federal arrest.

Original Jurisdiction began its coverage of the multiple-lawsuit settlement this way: “If these cases can settle, then any case can. … The level of vitriol in the litigation was remarkable and it had dragged on for years, seemingly with no end in sight.”