Barrett: Sharing Scalia's philosophy doesn't mean I agree with every sentence he said 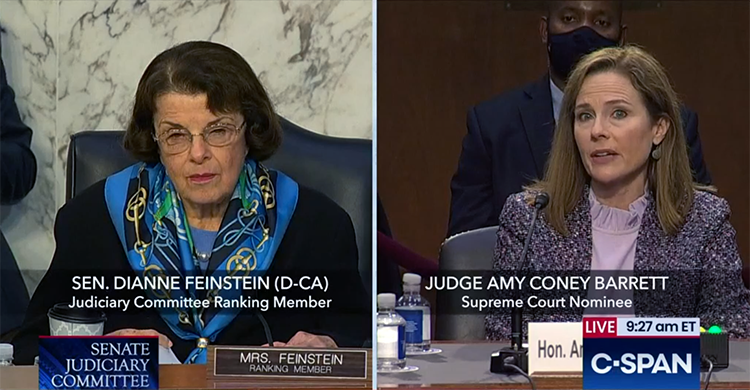 Supreme Court nominee Amy Coney Barrett deflected questions on Wednesday about whether she agreed with Justice Antonin Scalia's assertion during oral arguments that a key provision of the Voting Rights Act is a "perpetuation of racial entitlement."

Scalia had made the statement during oral arguments in Shelby County v. Holder, the 2013 case that struck down the preclearance formula in the Voting Rights Act. Scalia said he believed reauthorization of the law was “attributable to a phenomenon that has been called the perpetuation of racial entitlement.”

Democratic Sen. Dianne Feinstein of California asked Barrett whether she agreed with Scalia.

Barrett didn’t offer an opinion, but she did say she has some differences with Scalia.

Feinstein also asked Barrett about a case in which Barrett joined with other judges on the Chicago-based 7th U.S. Circuit Court of Appeals to rule that job applicants can’t pursue disparate-impact age discrimination claims under the Age Discrimination in Employment Act. The case, Kleber v. CareFusion Corp., was brought by 58-year-old lawyer who was passed over for a job in favor of a 29 year old applicant with less experience.

Barrett said she ruled based on the wording of the statute, which said it covered employees and did not mention applicants.

Feinstein asked where Barrett stood on the issue.

“Since I can’t impose the law of Amy, that would be up to Congress,” Barrett replied.