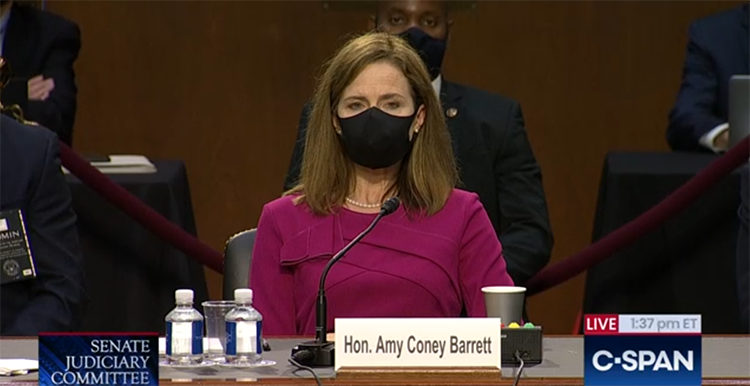 Judge Amy Coney Barrett will begin to face questions from the Senate Judiciary Committee on Tuesday. Image from C-SPAN.

President Donald Trump was already impatient with the pace Monday morning. “The Republicans are giving the Democrats a great deal of time, which is not mandated, to make their self serving statements relative to our great new future Supreme Court Justice,” Trump tweeted. “Personally, I would pull back, approve, and go for STIMULUS for the people!!!”

In their statements Monday, Democrats focused on the Affordable Care Act and their fears that Barrett would vote to overturn the law and its protections for preexisting conditions. They also argued that Senate Republicans should wait to hold a hearing until after the election, as they did when President Barack Obama nominated Merrick Garland to the U.S. Supreme Court in 2016.

Democratic Sen. Amy Klobuchar of Minnesota criticized the confirmation hearing as a “sham” that showed the “messed up priorities” of the Republican Party amid the COVID-19 pandemic. But Democrats don’t have the procedural ability to stop the hearing, Klobuchar said.

Barrett has received a “well qualified” rating from a substantial majority of the ABA Standing Committee on the Federal Judiciary. A minority of the committee rated Barrett “qualified” for the Supreme Court. The rating, revealed in an Oct. 11 letter, is based on an evaluation of Barrett’s integrity, professional competence and judicial temperament.

Barrett told the Senate Judiciary Committee she believed in interpreting the Constitution and laws as written. “Courts are not designed to solve every problem or right every wrong in our public life,” she said in her prepared remarks. “The policy decisions and value judgments of government must be made by the political branches elected by and accountable to the people. The public should not expect courts to do so, and courts should not try.”

Barrett is currently a judge on the Chicago-based 7th U.S. Circuit Court of Appeals. Before her 7th Circuit confirmation, she was a professor at the University of Notre Dame Law School.

Among those who praised Barrett was retired University of Notre Dame law dean Patricia O’Hara, who said Barrett was well-liked by students and admired by academics. O’Hara described Barrett as “brilliant but humble, fair and impartial but empathetic, open-minded and respectful of differences.”