Democrats at Barrett confirmation hearing focus on health law, even as they label proceedings a 'sham' 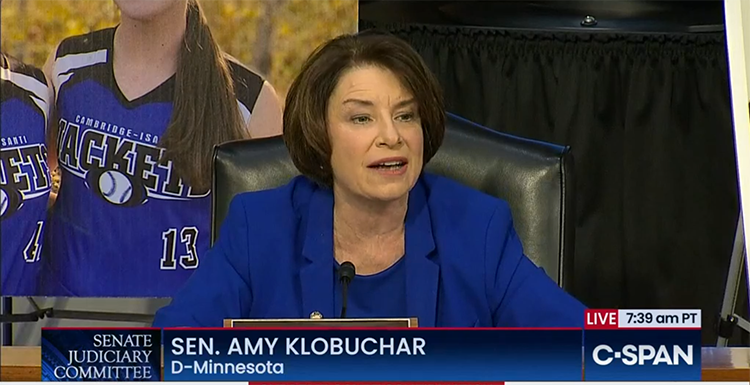 Democratic Sen. Amy Klobuchar of Minnesota criticized the confirmation hearing as a “sham” that showed the “messed up priorities” of the Republican party amid the COVID-19 pandemic. Image from C-SPAN.

Democrats held up pictures of people who would lose health care coverage if the U.S. Supreme Court strikes down the health care law in a new challenge.

They also argued that Senate Republicans should wait to hold a hearing until after the election, as they did when President Barack Obama nominated Merrick Garland to the U.S. Supreme Court in 2016.

In some instances, Democrats and Republicans appeared to be appealing to Americans who will be choosing a new president on Nov. 3.

Democratic Sen. Amy Klobuchar of Minnesota criticized the confirmation hearing as a “sham” that showed the “messed up priorities” of the Republican party amid the COVID-19 pandemic. And Democrats don’t have the procedural ability to stop it, Klobuchar said.

Nor do they have the votes. “I doubt there will be a brilliant cross-examination” that will change the result, Klobuchar said. She urged Americans to make their voices heard when they vote. “This isn’t Donald’s Trump country; it is yours,” Klobuchar said.

For their part, Republicans raised the specter of court packing by Democrats if they should win control of Congress. If Democrats increase the number of seats on the U.S. Supreme Court, the basic ideas of civics would be blown up and the court would be transformed into a partisan judicial legislature, said Republican Sen. Ben Sasse of Nebraska.

It’s wrong to suggest that judges are wearing red or blue partisan jerseys beneath their robes, he said.

The U.S. Supreme Court is scheduled to hear arguments in the new challenge to the health care law on Nov. 10.

One issue in the new case, California v. Texas, is whether the entire health care law must be struck down. The law has several protections, including a ban on insurers denying coverage to people with preexisting conditions and a ban on insurers charging more money because of a person’s risk profile. The Trump administration has argued the entire law must fall.

Barrett criticized the majority opinion upholding the law, written by Chief Justice John G. Roberts Jr., in a 2017 article. Barrett wrote that Roberts “pushed the Affordable Care Act beyond its plausible meaning to save the statute.” If Roberts had interpreted the required payment as a penalty, Barrett wrote, “he would have had to invalidate the statute as lying beyond Congress’ commerce power.”

Democratic Sen. Sheldon Whitehouse of Rhode Island argued that Barrett “has signaled—in the judicial equivalent of all-caps—that she believes the Affordable Care Act must go, and that the precedent protecting the ACA doesn’t matter.”

Republican Sen. Charles Grassley of Iowa said in his opening statement that it is “outrageous” for the left to suggest that Barrett’s confirmation would lead to the demise of the Affordable Care Act. “As a mother of seven, Judge Barrett clearly understands the importance of health care,” Grassley said.

Grassley said Barrett criticized Roberts’ conclusion that the Affordable Care Act is a tax, but that legal question is not before the court in the new case.

Republicans emphasized Barrett’s intelligence and character, and said it would be wrong to raise questions about her Catholic faith. Barrett is “brilliant, respectful and kind,” and when she disagrees she does so “without personal rancor or malice,” said Republican Sen. John Cornyn of Texas.

The Constitution bars any religious test as a qualification for any office, Cornyn said. What is important is commitment to the rule of law. “You’re being asked to abandon that, judge,” when Democrats want to see a guaranteed result as a quid pro quo for confirmation, he said.

Republicans appeared to be deflecting any suggestion that Barrett’s religion will influence her position on Roe v. Wade and abortion. But Democrats mostly stayed away from that hot-button issue.

One other issue that did get mentioned was the possibility that Barrett and other justices could rule on any presidential election disputes.

Democratic Sen. Richard Blumenthal of Connecticut said Barrett should recuse herself in such a case. “It’s a break-the-glass moment,” he said.

Barrett discussed a different recusal issue in a 1998 law review article called, “Catholic Judges in Capital Cases.” The article, which Barrett co-wrote with a Notre Dame law professor when she was a law student, considered whether Catholic judges should recuse themselves in capital cases because of the church’s position on the death penalty.

ABAJournal.com: “Would Barrett ax the Affordable Care Act? She has expressed some views; severability is a question mark”